It’s been 29 years since someone lit the Black Flame Candle and resurrected the 17th-century sisters, and they are looking for revenge. Now it is up to three high-school students to stop the ravenous witches from wreaking a new kind of havoc on Salem before dawn on All Hallow’s Eve.

I wouldn’t say, never meet your idols, but don’t be surprised when they turn out to be exactly who they said they were. It’s Not always the case, but sometimes the rumors are true. If they are known to be a bully, expect some aggression. If they’re regarded as awesome, expect medium greatness. And if there is proof that they are revenge and power-hungry witches, stay as far away as possible — or possibly be turned into an immortal black cat.

Let the warmth of black magic overcome you as you laugh and relive your childhood. Directed by Anne Fletcher, Hocus Pocus 2 is a bubbling cauldron of sisterhood, laughs, and nostalgia. Many of us have been anxiously waiting for a follow-up to 1993’s witchy classic, Hocus Pocus, well, wait no longer. This sequel is a spellbinding hug to all those who continue to have the original on their watchlist every October. It’s heavy on callbacks and easter eggs, it hits some of the same beats, however, this broomstick ride through the Salem sky is more lighthearted and message-driven than its predecessor. Nevertheless, deadset on righting the wrongs done to them in the past, the Sanderson sisters are ready to wreak havoc and sing a few enchanting songs once a new Black Flame Candle is lit. How is there a new candle you ask? Well, that’s a story all its own and may have future implications, but you’ll have to watch until the credits finish rolling to find out. While the plot is pretty straightforward, a furry mystery saunters and stalks its way through the film.

“My doing has been my undoing.”

Does the film rely too heavily on its nostalgia to advance the story? Perhaps a little. There are moments that are rather identical to the first film. Is it funny? Yes. Could more have been done, seeing as it takes place in the present day? Most definitely. But ultimately, the film serves its purpose and Salem is still a relatively small town and you don’t want to lose that feeling. It’s fun, charming, and better the second time. Also, this sequel is pretty self-contained therefore, you don’t necessarily need to have seen the first movie to enjoy this one. As it momentarily delves into the origin story of the Sanderson sisters, it also does a great job of explaining what happened in the past through storytelling and flashbacks. Now, as I said previously, the tone of this film is nowhere near as dark as the first one. Where the first focused more on the battle of good versus evil with plenty of dark magic, this one centers itself around fractured friendships, sisterhood, growing up, and just enough magic to keep the witchcraft alive. The messaging is positive and it showcases much-needed conflict resolution that will do its younger viewers some good. Hocus Pocus 2 is inclusive as Disney can currently be, expansive, and perfect for the whole family. Oh, and let me not forget, the costumes are still great. Its rewatchability is high.

The film’s pacing is on par with the original. It has a subtle build and then once the sisters appear, it’s nothing but witchy mayhem. However, it does find itself in a rush at times as it attempts to cram one too many subplots into the mix. What popped out for me was the tiny bit of the origin story that we see played out. The young actresses that play the young Sanderson sisters were great and it’s a concept that should be fully explored in another sequel or spinoff series.

While the acting overall doesn’t quite blow you away, it’s the chemistry of the cast that really makes it sing. It’s exciting to see the trio of Bette Midler (Winifred), Sarah Jessica Parker (Sarah), and Kathy Najimy (Mary) back as if they never left. Winifred still holds all the power while Sarah and Mary remain her idiotic but lovable sidekicks. As they face off against this new trio of young ladies, Becca (Whitney Peak), Izzy (Belissa Escobedo), and Cassie (Lilia Buckingham), it’s almost a passing of the wand, if you will. Not only is this new trio racially diverse, but they’re a joy to watch. My favorite character has to be Sam Richardson’s character, Gilbert. Gilbert represents a generation of us, that grew up loving the original movie and continued to watch it every year come October. The only unfortunate part of the film is that we only get to witness the magical Hannah Waddingham for a very short time. Perhaps there are plans for her in the future. 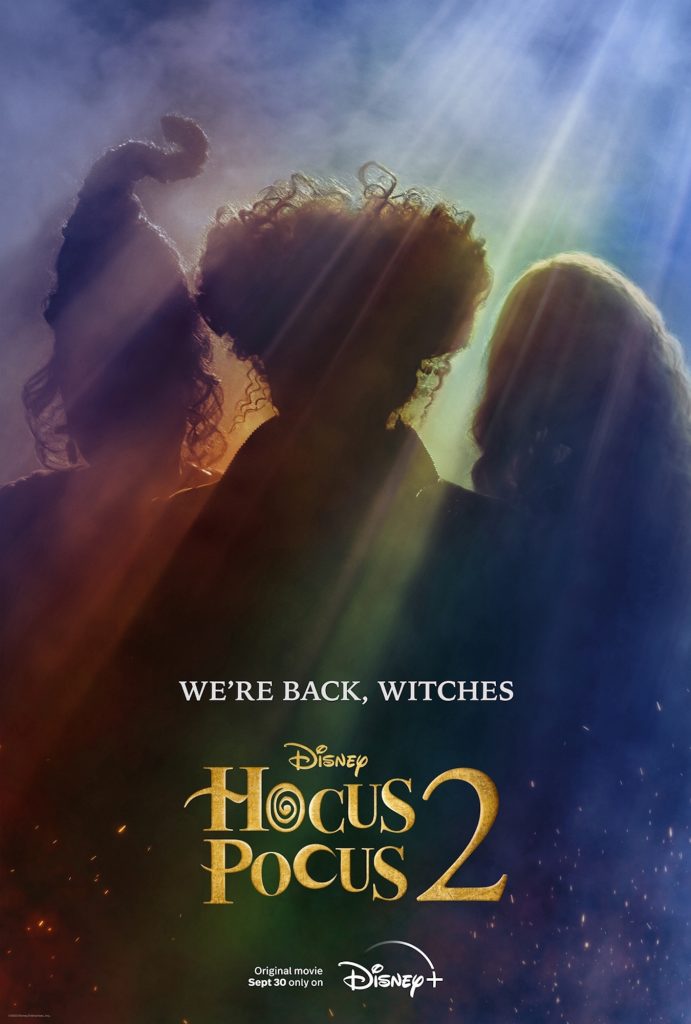 Hocus Pocus 2 is a bubbling cauldron of sisterhood, laughs, and nostalgia.