Lemony Snicket’s ‘POISON FOR BREAKFAST’ Review – Less of a Mystery, More of a Leisurely Love-Letter to Literature 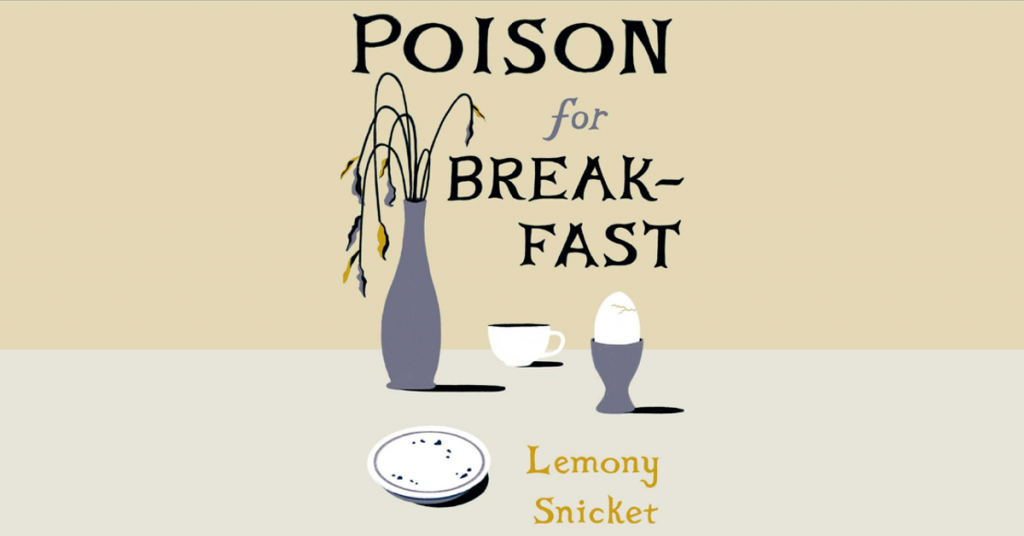 Over the course of his long and suspicious career, Mr. Snicket has investigated many things, including villainy, treachery, conspiracy, ennui, and various suspicious fires. In this book, he is investigating his own death. Poison for Breakfast is a different sort of book than others we have published, and from others you may have read. It is different from other books Mr. Snicket has written. It could be said to be a book of philosophy, something almost no one likes, but it is also a mystery, and many people claim to like those. Certainly Mr. Snicket didn’t relish the dreadful task of solving it, but he had no choice. It was put in front of him, right there, on his plate.

Like many adults of a certain age, I grew up on Lemony Snicket’s A Series of Unfortunate Events. To say that book series had quite an impact on the world of children’s literature feels like an understatement. Sure, it didn’t have the wild, uncontrollable fervor of Harry Potter or Twilight at their heights. But it still left a sizable impression on many young people. And now, after 13 A Series of Unfortunate Events books, 4 All the Wrong Questions books, and a handful of picture books, Snicket is back with a new novel, aimed at a more mature audience – Poison for Breakfast.

While on the surface, Poison for Breakfast looks like Snicket’s past books, it bears little in common with them. Poison for Breakfast is not a mystery novel, even though there is a mystery at the heart of the story. Instead, it’s a leisurely stroll through Snicket’s thoughts on various topics – including how best to prepare an egg, various philosophical ideas, and the very concept of literature. Fans of Snicket’s voice will adore the book. But those looking for a mystery with a bit more meat on its bones should, perhaps, look elsewhere.

The premise of Poison for Breakfast is simple, a word which here means “easy to understand”. (I promise that’s the only time I’ll make that joke.) One morning, Lemony Snicket finds a note on the ground. And on that note is a message: “you had poison for breakfast”. But who sent the note? And how did they know he’d been poisoned? So, Snicket quickly sets about solving this mystery. Step one: figure out how he was poisoned. Step two: figure out who poisoned him and why. And step 3: figure out how to stop the poison before it kills him. His investigation takes him to a tea shop, a honey seller, a library, and more, each step hopefully bringing him closer to solving the mystery of his poisoning. All in all, the basic properties of an enjoyable mystery – complete with a very Snicket-esque solution.

More of a Musing on Philosophy than a Mystery

However, despite what the premise suggests, Poison for Breakfast isn’t really about solving the mystery of who poisoned Lemony Snicket. Sure, that’s the frame from which the novel hangs, but it’s not the main idea of the piece. Instead, Snicket uses the novel to work through a bunch of bigger ideas. He expounds upon his own philosophical beliefs – discussing how he feels we should treat one another, all of the unanswerable questions about life, and most importantly, the wonders of literature. In fact, I’d describe this book as more of a love letter to the concept and inherent power of literature than a murder mystery.

Snicket’s books have always, in part, been love letters to literature as an art form. And that remains true here, perhaps even more so. Multiple chapters recount anecdotes about stories Snicket remembers, and the lessons they’ve taught him. However, all of this philosophizing doesn’t amount to much until the story’s very end, where it only kind of coalesces. It all feels very nebulous, as though it’s more of a stream-of-conscious monologue than a story. And while this can be entertaining, it also grows a bit grating. To be fair, Snicket explicitly says the book is going to be bewildering, and he makes good on his word. But this bewilderment comes at the cost of well-explored themes. And without those well-explored themes, all of these tangents feel a bit listless. And maybe that’s the point, but I’m not sure it works.

Unlike Other Snicket Books

Now, whether any of that bothers you is largely gonna depend on what you’re hoping to get from the book. When viewed in the context of Snicket’s other books, Poison for Breakfast stands out like a sore thumb. It has next-to-no connections with any of his previous books, outside of a handful of very veiled references. In fact, the character of Lemony Snicket, himself, feels wholly disconnected from the Snicket character of the A Series of Unfortunate Events novels. But, to be fair, the marketing for Poison for Breakfast states it’s a stand-alone story. So, one shouldn’t really expect it to tie into a series it never promised to tie into. But still, if you see “Lemony Snicket” on the cover, you might expect more of a connection than you’ll get.

The bigger problem for Snicket fans will be the book’s structure. Poison for Breakfast focuses very little on its plot. The pacing is painfully slow at times, robbing the novel of any sense of urgency. And the frequent tangents often feel circular, as though there’s no real point to them other than to fill up space. Fans who enjoyed the plots of Snicket’s past work will likely feel quite disappointed. However, fans of Snicket’s prose will have a great time. While the previously mentioned tangents decimate the novel’s pacing, they are quintessential examples of Snicket-prose. Full of the classic wordplay, snark, and insight that long-time fans will be hoping for. If your idea of a good time is a novel solely comprised of Snicket’s asides from the Series of Unfortunate Events books, then Poison for Breakfast will thrill you to no ends.

As for me, I fall somewhere in between. Poison for Breakfast may be a quick read, but it’s not one I’d recommend reading quickly. Its meandering nature can sometimes make it hard to fully follow what’s actually being said – unless you deeply enjoy such stories. I, generally, do not. I’d have preferred something that hewed closer to the style of A Series of Unfortunate Events – a well-defined mystery with all of Snicket’s tangents and diversions sprinkled on top. But Poison for Breakfast offers the reverse of this. Now, it’s not all bad. The ultimate solution to the mystery is a rather clever one, especially in the context of Snicket-style twists. And much of the journey is quite enjoyable while you’re on it. But it just wasn’t quite what I’d have liked it to be.

If you’re looking for something that hews closer to Snicket’s past work, you’ll likely feel the same. But if all of this sounds right up your wheelhouse, then Poison for Breakfast is a must-read. If nothing else, it’s certainly a Lemony Snicket book.

Disclaimer: A review copy of the novel was provided by Liveright/W. W. Norton & Company and NetGalley. All opinions in this review are the honest reactions of the author.