‘Till’ NYFF 2022 Review – The Harrowing, Empathetic Story Emmett Till Has Always Deserved 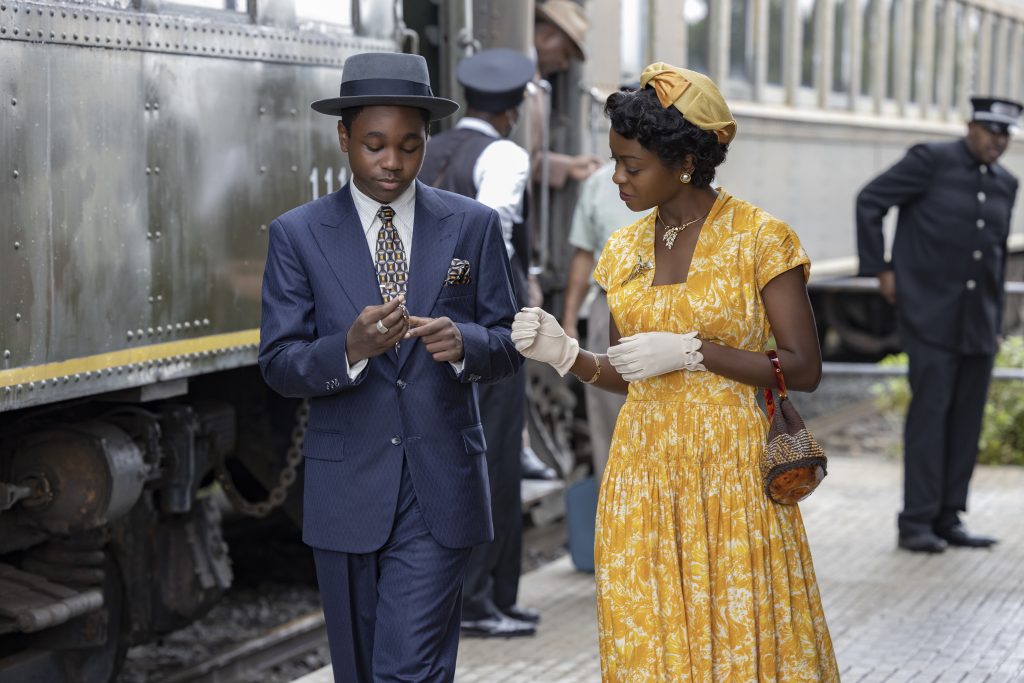 There are few crimes as heinous as the murder of the 14-year-old Emmett Till.

Till’s murder – a retaliation for his whistling at a white man – was one of the many sparks for the Civil Rights Movement. The horrifying images of Till’s bludgeoned and swollen body laid bare the viciousness and cruelties of racism. The Mississippi trial, which resulted in no criminal charges, emphasized how racism operates at systemic and institutional levels, which we still grapple with today. And yet, Emmett Till’s place in the public consciousness doesn’t beget understanding of his life, death, and the forces that enabled his murder.

Till, directed and co-written by Chinonye Chukwu, aims to bridge the gap. The film recounts the final weeks of Emmett Till’s (Jalyn Hall) life as he embarks on a vacation to visit his cousins in Mississippi from the (relatively) safe Chicago. His mother, Mamie (Danielle Deadwyler), is terrified that he is ill-prepared for his journey south but bids him farewell. Her worst fears are realized when two white men abduct and brutally murder Emmett for talking and whistling at Carolyn Bryant (Haley Bennett), a white woman. Mamie must mourn her son and navigate a sociopolitical machine that sees him as a conduit to real change for Black people nationwide. She bristles at the requests, but the visceral reality of Emmett’s lynching ignites her political awakening. The cards are stacked against her, but Mamie forges ahead to claim justice for her son.

For many Black parents, their child’s unaccompanied travels can easily become a horror story. (It’s as much of a reality in 2022 as in 1955.) Till recognizes that dread and frames itself around it. In the beginning, we see Emmett as bright and cheerful, unencumbered by the circumstances of his Blackness. We get a feel for who he was beyond his victimization. However, danger wafts through the air, and this brief warmth and empathy feed it. Chukwu leans on horror aesthetics and soundscapes to establish the tense atmosphere surrounding Mamie in the lead-up to Emmett’s departure, and Emmett as the threat of murder becomes imminent. Chukwu’s slow, steady camera movements and the film’s haunting score by Abel Korzeniowski heighten the fear of the inevitable. Seeing Emmett’s murderers crash through his uncle’s house and kidnap him is almost too much to bear.

The horror continues. While Chukwu deliberately chooses not to depict Emmett’s horrifying murder, we see the aftermath. We are with Mamie in the morgue as she surveys the brutality waged on her son’s body. The scene is grotesque by nature. However, the direction’s tenderness acts as a release valve for the pent-up anxiety building the whole time. The tears flow freely from Mamie and the audience so we could clear the deck and prepare for the fight ahead.

Till shifts from its harrowing horror structure as it transitions from Emmett’s murder and funeral to the arrests and the trial. That unique approach gives way to Mamie’s active participation in the fight for racial justice. The change to a more traditional framework is challenging tonally, but it is necessary. Till re-centers on Mamie’s complex grieving process and how it interweaves with her newfound activism. Mamie is more than a grieving mother; she is the face of a nascent political movement. The film lays bare the negotiations between those two identities and how Mamie and Emmett are treated as means to a political end (albeit a righteous one).

It hurts to watch, especially from Mamie’s unsteadily stoic but devastated perspective. Chukwu acknowledges that Mamie’s pain has multiple sources, not just the racists in Mississippi. (Although there is plenty of rage to feel towards the monstrosities masquerading as humans during the trial.) The legal, political, and psychological systems bear as much responsibility for the indignities done to Emmett as the individuals. That reality informs a significant portion of Mamie’s powerful journey, as does her deep and abiding love for her only child.

Danielle Deadwyler is tremendous in bringing Mamie’s story to life. She gives a deeply felt and incredibly thoughtful performance. Deadwyler is in tight control of Mamie’s debilitating fear and grief, letting very slight changes in her facial expressions communicate their depths. You can feel the misery come off her in waves, even when she’s holding it together. When Mamie’s control slips, Deadwyler lets loose a torrent of anguish – in screams and wails – that is overwhelming and cathartic. She modulates between those two modes effortlessly, sometimes in a single scene. Seeing her transform mourning to resolve as she stands above Emmett’s body and composure to rage and back in her trial testimony is extraordinary. Those moments are the best in the film and some of the best captured on film this year.

Till doesn’t hide from the horrors of Emmett Till’s murder, firmly connecting them to today’s world. (There are many Carolyn Bryants amongst us.) However, the film doesn’t mire itself in the misery wrought by his loss. It finds inspiration in Mamie and her unwavering strength and resolve. We see through her eyes the power of unconditional love and how it can change a hateful world. We also see the sobering reality that the work cannot end with one person. Sixty-two years after his murder, Till is the remarkable story he and his mother have always deserved.

Till had its World Premiere in the Spotlight section of New York Film Festival 2022. The film is scheduled to be released in select cinemas on October 14, everywhere on October 28, 2022 courtesy of United Artists Releasing and MGM.

Sixty-two years after his murder, Till is the remarkable story he and his mother have always deserved.