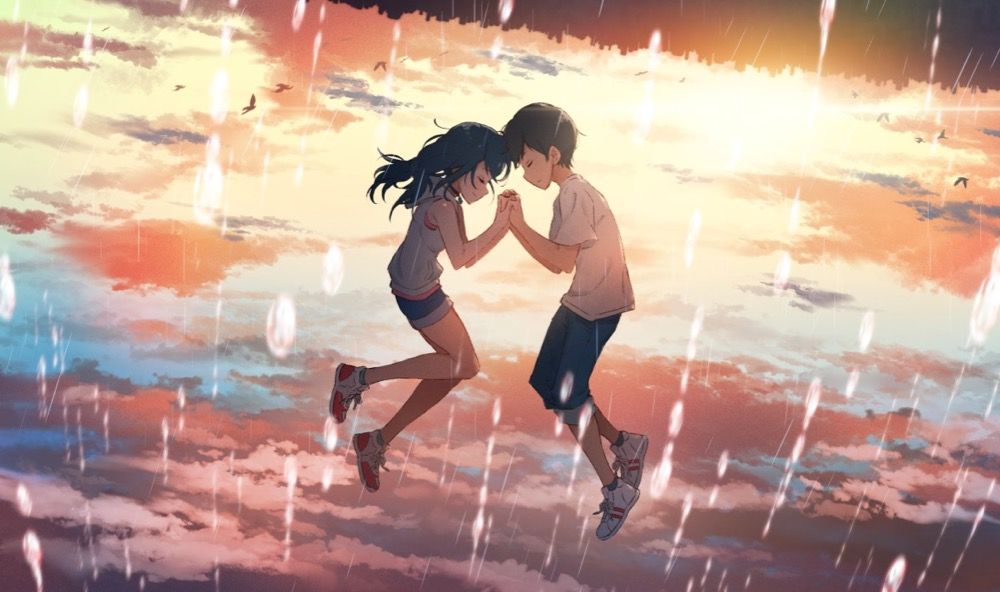 Director Makoto Shinkai has somewhat filled the void left by the retirement of Hayao Miyazaki with his inventive romantic fantasies that have inspired droves of fans to storm the cinemas. While a steady presence previously, Shinkai really cemented his place upon the release of his 2016 international hit Your Name, which would eventually go on to become the highest-grossing anime film of all time. Achieving this level of success can bring with it a lot of pressure when charting a follow-up, but Shinkai has swatted away such trivialities as he delivers his self-assured new feature Weathering With You, which has likewise secured a spot on the list of highest grossing anime films. The film feels spiritually linked to Your Name, but you owe it to yourself to forget about that film while viewing this one as comparisons are bound to tarnish your experience with this new project. Free from preconceived notions, Weathering With You offers up a fun and compelling tale that is a visual delight.

In this film, Shinkai once again focuses in on a teenage romance with its own set of supernatural issues. In June 2021, a 16-year-old runaway named Hokoda has left his rural hometown in favor of the hustle and bustle of Tokyo. The problem is, Tokyo has been plagued by constant rainfall that shows no signs of subsiding in the near future. While on a ferry to the city, Hokoda nearly loses his life in a flash flood if not for the assistance of Mr. Suga, a semi-shady magazine publisher who gives Hodaka his business card, and eventually a low-paying job. Before that, though, Hodaka roughs it as a homeless youth on the streets where he nearly gives up, if not for the kindness of a McDonald’s employee named Hina, a teenage girl with some baggage of her own and one heck of a secret. Hina is a “Sunshine Girl” who has the ability to pray away the dreary weather in favor of sunny skies. After Hokoda and Hina are reunited through a traumatic event, the pair begin to bond and eventually try to harness her powers to their financial benefit. 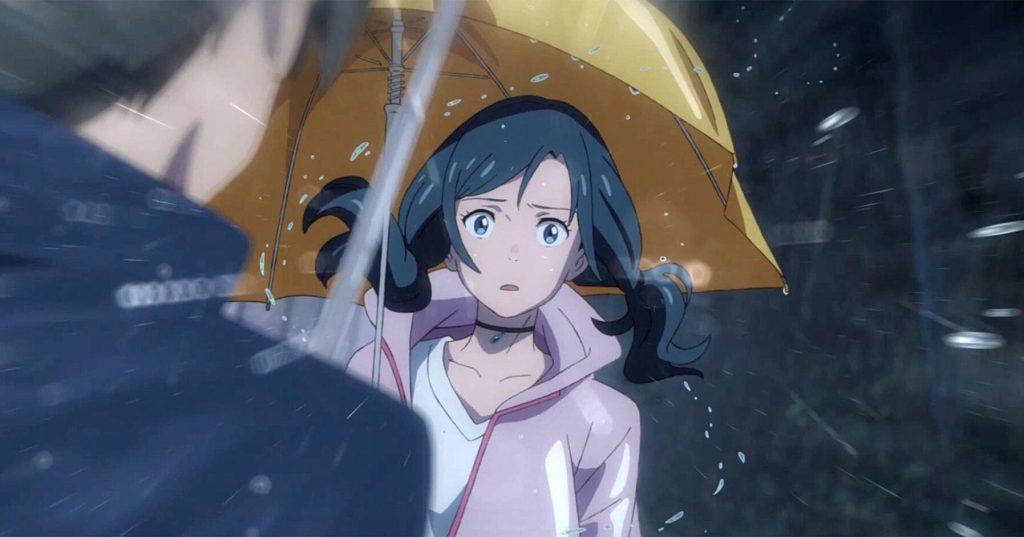 The unbridled joy that radiates from these two when they are doing their titular “weathering” is one of the highlights of the film. Neither of them have had the easiest go of life, but their relationship is a beautiful one to watch unfold. They each have more going on; Hokoda is proving his worth at Mr. Suga’s paranormal magazine, which he runs alongside his niece, Natsumi, and Hina is trying to adjust to providing for her young brother after recently being orphaned. They need each other in a way that transcends pure romance. When Hina begins to realize that her abilities come at a price that may make it difficult to continue being with those she cares about, your heart begins to break at the thought. Shinkai gets you fully invested in their journey, but some of his narrative choices in the latter half of the movie feel a bit misguided. It does not seem necessary to introduce a criminal investigation involving a gun that stalls the momentum of the film somewhat. There are so many threads to tackle from the torrential rain in Tokyo and Hina’s abilities to various interpersonal relationships, that you just want to focus on the characters without this specter bogging down the proceedings.

All of the characters in the film, from our main pair to the supporting characters in their lives, are written with an unbelievable amount of poignancy. This film knows how to expertly tap into the emotional moments in a really cathartic manner. Shinkai loves focusing on young love, and you are almost not surprised when a truly bonkers conclusion showcases that this love is more important than just about anything. It is a truly bold note on which to end that might irritate those whose thinking is more based in reality. Shinkai has once again delivered a visually dazzling film that pushes the boundaries of what you expect from animation. Just take a look at how detailed the water is in the film and imagine how long it took to get it just perfect. Your Name might be a title that proves difficult to top, but Weathering With You makes a great attempt by delivering a heartwarming love story wrapped in a global warming message. Shinkai may not completely stick the landing narratively, but he remains one of the most talented and important figures in the anime world currently. 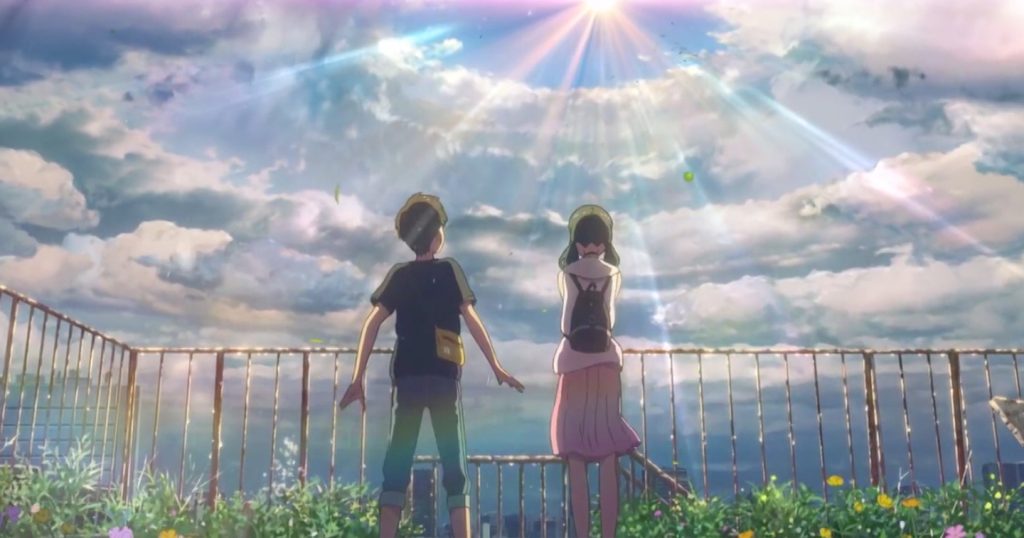 Weathering With You comes to Blu-Ray with a stunning and vibrant 1080p transfer. The colors present in this transfer are practically leaping off the screen with the wide range of hues permeating every inch of the frame. The textures, from the character designs to the environments, are extremely impressive and give the film a real sense of depth. One of the areas where the film really shines is the fluidity of the character designs. The subtle touches that are added to each individual is quite striking. The level of detail these animators put into each environment shines through here. Black levels are incredibly strong with no hint of compression artifacts or digital anomalies of the sort. This is about as close to perfect as a Blu-Ray disc can look. For those who are 4K UHD capable, GKIDS will also be releasing a Collector’s Set in November that has a 4K UHD Blu-Ray included.

The DTS-HD Master Audio 5.1 lossless track is presented here in its original Japanese and an English dub with optional English, Spanish or French subtitles, along with the option for English subtitled lyrics to play during the film. The track is a lovely sounding experience that brings the movie to life. The film is primarily dialogue driven with a lively, joyous score from RADWIMPS. Dialogue comes through crystal clear at all times without being overshadowed by any of the intense weather sounds or the score. There are some really fun panning effects in the rear channels that add a nice layer to the story. The score is an important part of the film that is precise in its placement throughout the room as it envelops the audience. The track employs some good activity in the low end when the things get a little more kinetic. There is also a nice amount of sonic detail in the surround channels as the sound of rain creates a world fully realized. The English-language cast does a decent job, but stick with the original Japanese language for maximum enjoyment. This is a stellar sounding release that should more than please fans of the film. 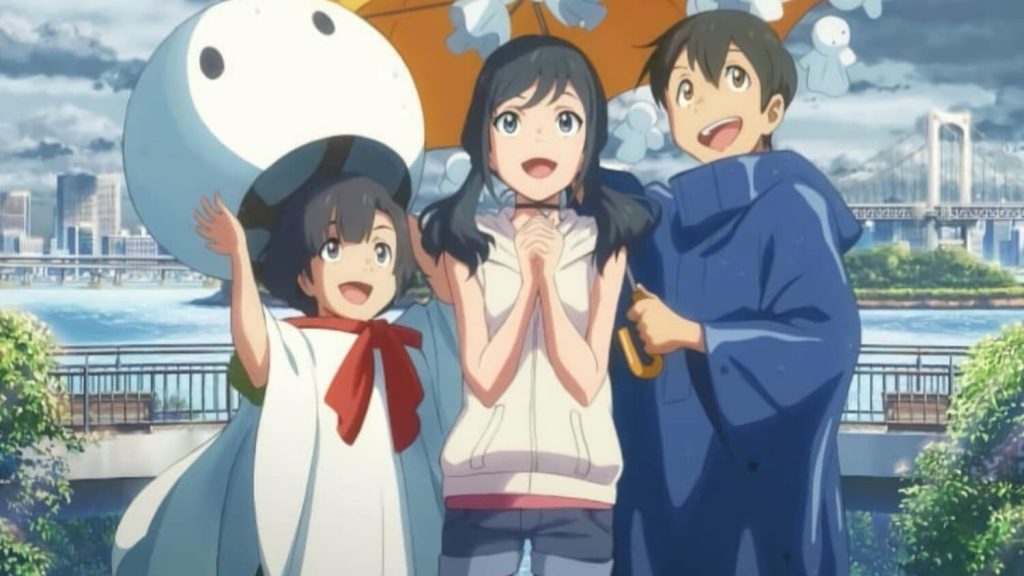 Weathering With You is an emotionally enriching journey that is anchored by a beautiful relationship and some of the most breathtaking visuals I have seen in some time. Makoto Shinkai had astronomical expectations to live up to with this most recent tale, and he challenged those expectations admirably. Shout! Factory and GKIDS have delivered a fantastic Blu-Ray with an impressive A/V presentation and some in-depth special features. This disc is an easy recommendation to anyone in need of something joyous and inventive in their lives. Highly Recommended

Disclaimer: Shout! Factory and GKIDS have supplied a copy of this disc free of charge for review purposes. All opinions in this review are the honest reactions of the author.