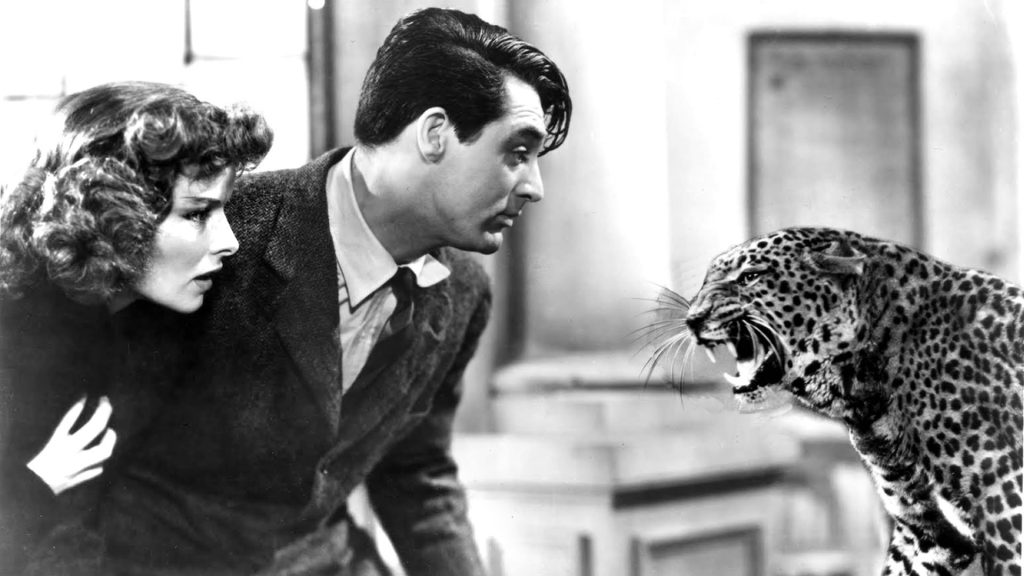 Valentine’s Day may be a rather silly holiday, but it is a wonderful excuse to celebrate love and romance in the movies. In that spirit, check back each day leading up to February 14th for a cinematic advent calendar of recommendations presented as mini-reviews.

Logline: A frazzled paleontologist must contend with a free-spirited heiress who has the means to fund his research.

Why you should watch: The foundational elements at play in Bringing Up Baby are, in a word, lunacy. Stuffy paleontologist David (Grant) yearns for his long-awaited “intercostal clavicle” to complete a dinosaur skeleton before he gets married to his research partner and girlfriend. Zany heiress Susan (Hepburn) takes a liking to David and, through her chaotic energy and devil-may-care approach to life, spins him into her orbit as a result of his needing to woo her aunt who is considering a million-dollar donation to the museum. Plus, if that wasn’t enough, the “baby” of the title refers to a leopard Susan picks up along the way to further mess with the proceedings. Into this heavenly mayhem step Cary Grant and Katharine Hepburn, two royals of romantic comedies under the direction of towering director Howard Hawks. To quote another classic, it’s “the stuff dreams are made of.”

Part of the magic of Grant and Hepburn on screen together is that both were masters of craft regardless of genre. Grant changed Hollywood history as much through his humorous roles as his more thrilling work with Alfred Hitchcock, and Hepburn is as legendary for her comedic timing as devastating skill with drama. Bringing Up Baby is a movie that understands the power of each performer and lets them play. It is the second of four movies the pair would make together, and while there may be some The Philadelphia Story (1940) fans reading this, it is easily their best. Grant subverts his suave image by ratcheting up David’s awkwardness, stammering, and stumbling his way through golf courses and dinner parties alike. Hepburn shapes Susan into a boundless ray of energy with her heart on her sleeve and seemingly no way to go five minutes without causing a scene.

There is any number of scenes to recommend Bringing Up Baby, but a personal favorite occurs when David accidentally tears the back of Susan’s dress and must maneuver through a ballroom to preserve her modesty without making it seem like he is, well, diving into her dress. It is a feat of physical comedy, line-reading, and sexual tension. What more could you ask for?

Where you can watch: Streaming on HBO Max. Rent on Apple, YouTube, and elsewhere.