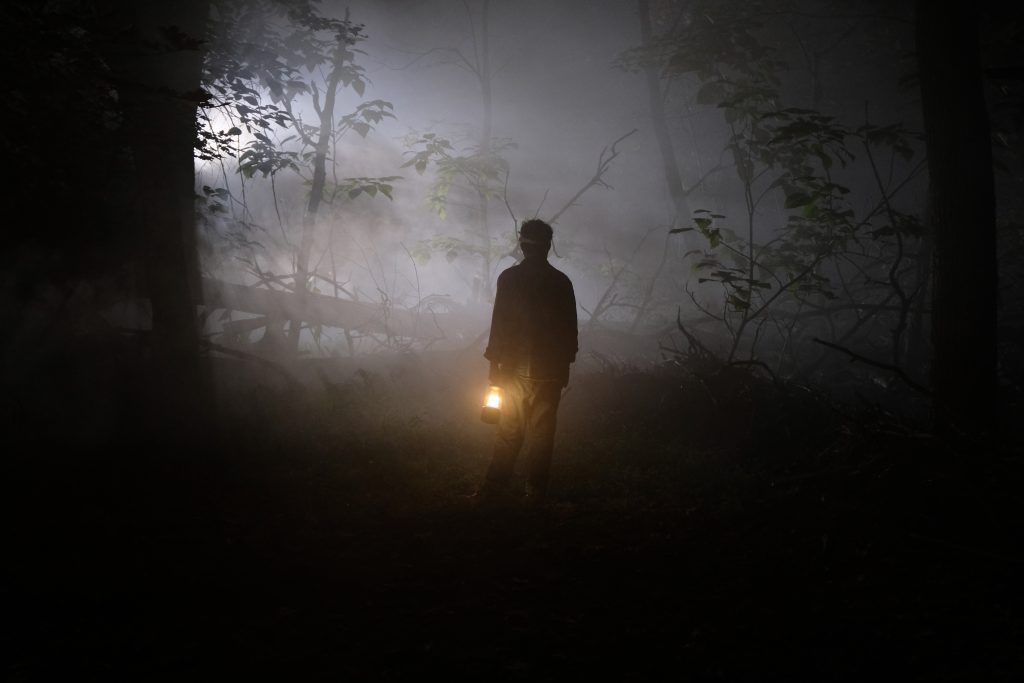 Plot Summary: It’s the perfect plan: A serial killer brings an unsuspecting new victim on a weekend getaway to add another body to his ever-growing count. She’s buying into his faux charms, and he’s eagerly lusting for blood. What could possibly go wrong?

Sadly, there was not a lot of horror offered at Tribeca this year, at least on the virtual side. Though, I am happy that Travis Stevens’ latest film A Wounded Fawn was a part of the festival. Stevens has directed some really interesting genre offerings such as Girl on the Third Floor and the excellent horror comedy Jakob’s Wife released last year. Given this track record for wildly inventive films, expectations were very high. I am happy to report that this is another classic-in-the-making for Stevens.

It’s hard to put into words, but I think the best way to describe A Wounded Fawn is falling into that strange realm between the waking world and a nightmare. Fawn takes you into a haunting world, a collection of blood and bones that lay scattered throughout the darkest parts of one’s subconscious mind. I love how the filmmakers take the incredibly tired serial killer and cabin-in-the-woods trope and outfit it in a grotesque re-contextualized form that feels less like Friday the 13th and more Henry Portrait of a Serial Killer with some shades of Sam Raimi’s over-the-top Evil Dead series for good measure. What is so amazing about Stevens film is it plays with well-worn horror iconography, but it takes devilish delight in subverting them every chance he gets.

The movie also plays with gender-roles, trauma and being in a controlling and toxic relationship. While these themes aren’t exactly groundbreaking in 2022, A Wounded Fawn tackles them in a way that feels wholly fresh. The mythology that is threaded throughout is another aspect that makes this more engaging and interesting overall. Visually, the film is drenched in this grounded reality but wonderfully slips into this strange and haunting no-man’s land which feels like it perfectly places you inside the mind of a very sick person. Speaking of the aesthetic, I love how added scratches and artifacts give the film a Grindhouse quality. Minus the cell phone used (for practical plot reasons), I could easily buy this as a weird Euro indie from the ‘80s. Couple this with sharp editing and tense sound design, and you have a truly special indie film.

Josh Ruben, who’s a brilliant filmmaker in his own right, takes center stage as Bruce, the serial killer that takes his victim Meredith to his isolated cabin. It’s very clear that Ruben really understands both sides of the camera. He has acted, directed and, in the case of Scare Me, done both at the same time. What impressed me is how Ruben is effortlessly able to slip into this character that feels harmless, if not kind of a douche-bag, but able to sway into this intense ball of rage in a way that feels organic and not over-the-top. There are little moments that he does with only a look or body language that tell you a lot about the character. Acting side-by-side with Ruben is Sarah Lind. She is equally as fantastic, and like Ruben, she brings a lot to her character that is between the text. It is a pleasure to see Lind and Ruben act, and you can tell the two are completely in sync which I think is the key to buying this premise.

If there is any justice, Travis Stevens will firmly be a household name within the horror world. He has proven that he can take staples of genre, such as vampires in the case of Jakobs Wife or serial killers as in this film, and put a totally new fresh spin on the material.

A Wounded Fawn had its World Premiere in the Midnight section of the 2022 Tribeca Film Festival.