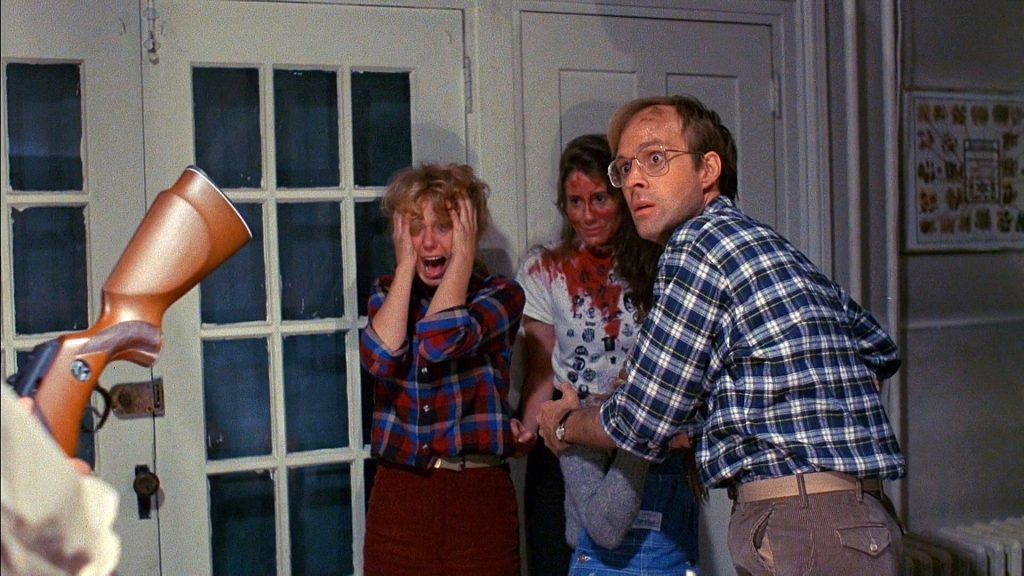 While Blumhouse may be the current company best known for earning huge profits from low-budget horror films, they are far from the first to have the idea. Even modern companies that we know and love today like New Line Cinema have their origins tied to such projects. Back when they were transitioning from being only a distribution company to a full-blown production outfit in the early 1980s, director Jack Sholder (A Nightmare on Elm Street 2: Freddy’s Revenge) had an ambitious idea for his directorial debut concerning a group of escaped mental patients causing havoc in NYC during a blackout. The idea was solid, but the founder of New Line knew it would be too expensive to be profitable. It needed to be more contained, and through the shaping of his idea the thrills became more personal. This project would become the 1982 slasher Alone In The Dark, a nimble little film with plenty of character and an ensemble that cannot be beat. It often does not get the appreciation it deserves, but hopefully this fantastic new release from Scream Factory will correct that.

There is about to be a major shakeup at Haven, an experimental psychiatric hospital in New Jersey, which does not work out well for anyone involved. Dr. Dan Potter (Dwight Schultz, The A-Team) is a psychiatrist who has just come on board as the newest member of the staff under Dr. Leo Bain (Donald Pleasence, Halloween). The methods employed by Bain come as a bit of a shock to Potter as he gives the patients a significant amount of freedom, except for the third floor which houses more violent patients who are secured by an electric door. Potter’s arrival comes on the heels of the departure of his predecessor, Dr. Merton, who has taken a new position in Philadelphia. This reality is unacceptable to a bevy of unstable third-floor patients; Frank Hawkes (Jack Palance, Attack!) is a former POW with delusions; Byron “Preacher” Sutcliff (Martin Landau, Mission: Impossible) is a former man of God turned pyromaniac; Ronald Elster (Erland Van Lidth, Stir Crazy) is an imposing child molester; and John “the Bleeder” Skagg is a supposedly “shy” serial killer who refuses to show his face. Believing that Dr. Potter murdered their beloved Dr. Merton, the patients devise a plan to kill the newly-arrived doctor. 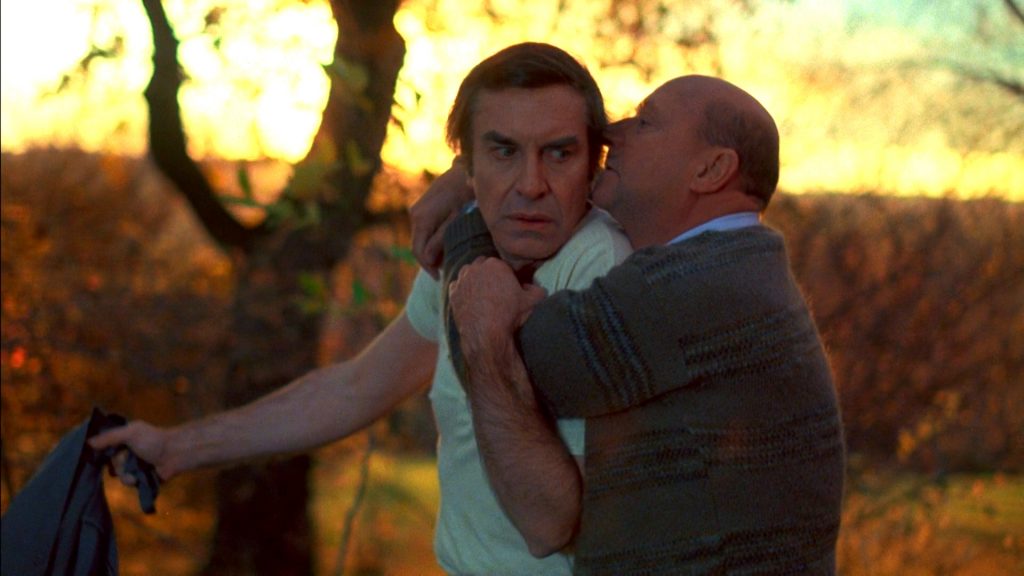 The aforementioned script idea from Sholder would have had these mental patients running amok in a dense urban population which would have been fun for maximum carnage, but not the best for suspense. With this irrational personal vendetta conjured up by the patients, there is a sense of purpose when the group takes advantage of a power outage and escapes the facility (with a body count already forming). There are detours on the way to the house of Dr. Potter, but at its core this is a home invasion thriller. For a home invasion thriller to work, you have to at least care about one side of the equation. The perpetrators are darkly entertaining as they seek to carry out some old-school justice, and this is aided by some truly stellar performances by Palance and Landau, especially. The family being invaded has a decent amount of personality to garner your concern even if they fall into the tropes of some poor decision making. You want most of them to survive, but you cannot deny it is fun to see these unhinged men pick off some of the tertiary characters.

Alone In The Dark does a nice job of building up the tension until you reach a final siege on the house. The blackout and multiple attackers help keep you on edge as you wonder when someone might appear from the shadows and from what direction. In terms of kills, this film does not go overboard on anything too inventive with weapons or other manners of dispatching victims. The kills are straightforward enough for the genre but effective – this is far from the most violent film of its type. What gives this film a bit of unique edge is the undercurrent of dark humor that pervades the story. Potter has a daughter (Elizabeth Ward) who is very precocious which manifests in unexpected ways. An encounter she has with one of the intruders early on is quite amusing even if it leaves you with some questions. Palance also seems to be having a blast manifesting lunacy in his performance, and the way in which his character ties into the ending provides something a bit atypical in terms of its social commentary on sanity. Maniacs-on-the-loose has been done before, but Alone In The Dark is a strong entry into this subgenre. The movie delivers great tension when necessary but is not humorless. This one is a mighty fun time for horror fans. 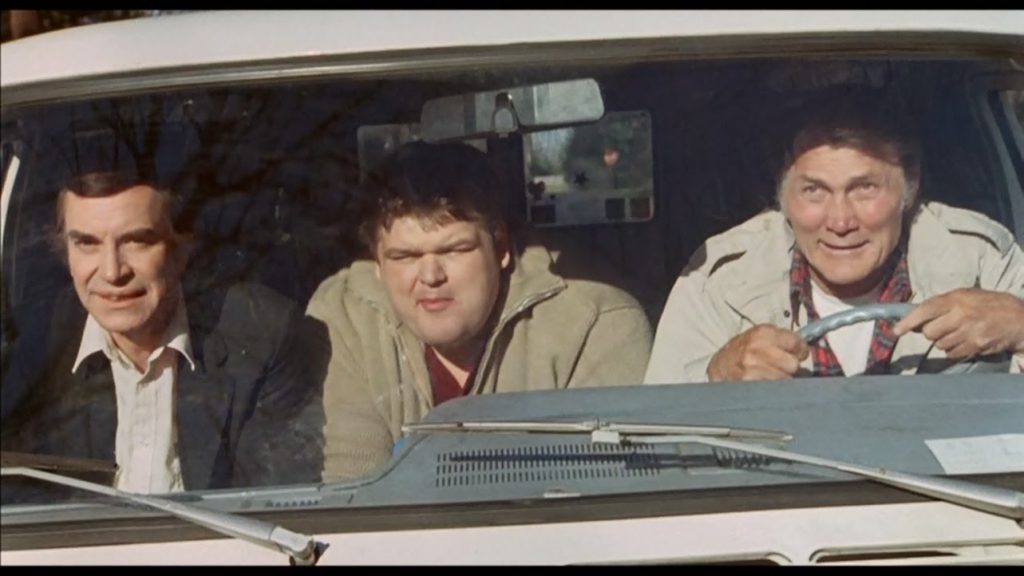 This new Blu-Ray from Scream Factory rescues Alone In The Dark from the land of standard definition with a stunning new 2K scan of the interpositive in an AVC encoded 1080p transfer in 1.85:1. The film has a very pleasing grain structure that preserves the filmic look of the picture, showcasing subtle details in the production design from the interiors of the facility to the house where the siege takes place. The practical effects of the various kills hold up well under the scrutiny of high definition. Skin tones look natural and consistent throughout the runtime. Colors pop off the screen with immense vibrancy, especially in some of the clothes and even the blood running down the face of “The Bleeder.” Black levels hold up really well with some admirable depth to the image. The white levels are extremely solid with no instances of blooming. The print damage has all but been eradicated with this new transfer. Scream Factory has done a great service for fans of the film who have been anxiously awaiting this one to be treated with care.

This Blu-Ray comes with a DTS-HD 2.0 Master Audio track that captures this story flawlessly. The activity taking place in nature or during the chaotic looting scene provide some excellent ambient details. All of the various sounds in the mix seem accurately rendered so that nothing ever feels off. Dialogue sounds perfectly clear without sound effects or the score trouncing on important information. The screams, crashes and other sounds stemming from horrific sequences are given the appropriate weight within the mix. The atmospheric score from Renato Serio comes through beautifully without trodding over the other more subtle elements. This is a well-done, balanced mix that should not disappoint anyone. 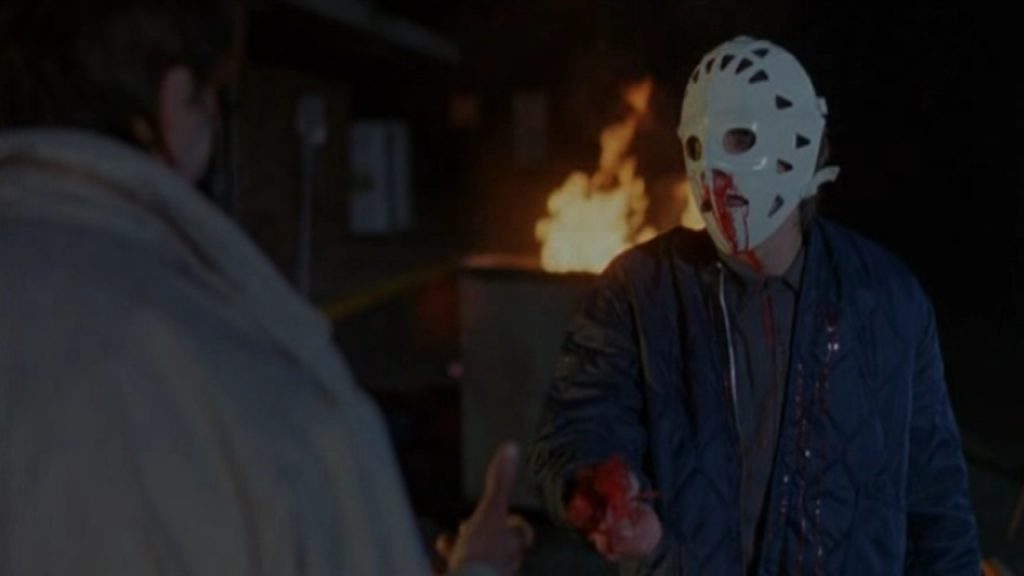 Alone In The Dark is a really fun and inventive slasher film that injects subtle social commentary on mental health while delivering spine-tingling thrills. The performances from the ensemble are truly great with Palance, Landau and Pleasence being the most obvious standouts. This is a really confident debut feature from Jack Sholder which does not skimp on the excitement. Scream Factory has released a Blu-Ray featuring an A+ audio/visual presentation and a wonderful array of special features. Fans who have been waiting for this one should be thrilled by what this company has delivered. Highly Recommended

Alone In The Dark (Collector’s Edition) is currently available to purchase on Blu-Ray.