Arrow Video has announced six new titles to join their collection on 4K UHD and Blu-Ray this April: 8 Diagram Pole Fighter (1984), Mary Shelley’s Frankenstein (1993), Robocop (1987), Rogue Cops and Racketeers (1976-1977), Twisting The Knife (1997-2003) and 12 Monkeys (1995). These represent a sci-fi classic from Terry Gilliam, an iconic sci-fi satire from Paul Verhoeven, and a monster tale from Kenneth Branagh and more. Details on these films can be found below: 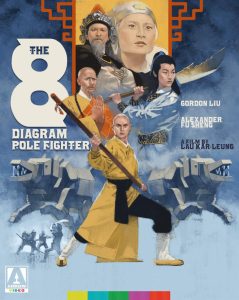 Synopsis: After one of its lead actors (cherub-faced action icon Alexander Fu Sheng) unexpectedly died midway through production, fight-choreographer-turned-master-director Lau Kar-leung (The 36th Chamber of Shaolin) retooled his latest film, The 8 Diagram Pole Fighter, as the ultimate action spectacular in tribute to his young star. Loosely based upon the legendary Yang dynasty chronicled in Chinese folklore, the film starts as a family patriarch and all but two of his sons are brutally wiped out in a bloody battle with a rival family. One surviving son (Fu Sheng) returns to his mother and two sisters, driven mad with grief; the other (Gordon Liu) escapes and joins a nearby monastery while in hiding. Once he learns his sister (Kara Hui) has been captured by their enemies, however, the warrior-turned-monk realizes he must renounce his peaceful ideals in order to mount a rescue mission and avenge his family. One of Shaw Brothers’ final all-star martial arts epics before they ceased filmmaking altogether, The 8 Diagram Pole Fighter is often regarded as Lau’s masterpiece, as elegiac and suffused with anguish as it is thrillingly violent (not least in its bone-crunching, teeth-smashing climax). 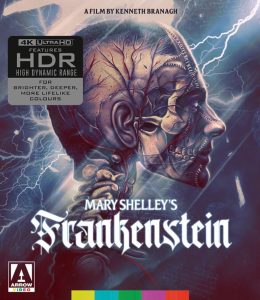 Synopsis: Kenneth Branagh leads an all-star cast including Robert De Niro, Helena Bonham Carter, Tom Hulce, Ian Holm, John Cleese and Aidan Quinn in his definitive cinematic version of Mary Shelley’s classic tale of gothic terror. At the turn of the 19th century, visionary scientist Victor Frankenstein (Kenneth Branagh) embarks on an obsessive quest to conquer the mysteries of human mortality. But his hubristic bid to create life out of death goes hideously wrong, and succeeds only in begetting a deformed monster (Robert De Niro). Horrified by what he has wrought, the scientist attempts to destroy his creation, but fails. Rejected by his creator and shunned by the world of man, the tormented creature swears vengeance against Frankenstein and his family. As the monster begins to enact his murderous revenge, Victor must face a terrible reckoning with the tragic consequences of attempting to play God. Mary Shelley’s seminal novel is one of the most adapted books of all time, and this retelling faithfully goes back to the original source, lushly transforming the story’s twin themes of love and death into a darkly operatic gothic romance. Unlike many versions of Shelley’s novel, Branagh’s adaptation understands that Frankenstein’s misbegotten creation is as pitiable as he is monstrous, and never loses sight of the human tragedy lying at the core of its horrific tale. Filled with sweeping, atmospheric visuals and powerfully emotional performances from an award-winning ensemble of acting talent, Mary Shelley’s Frankenstein stands as a landmark interpretation of this enduring masterpiece. 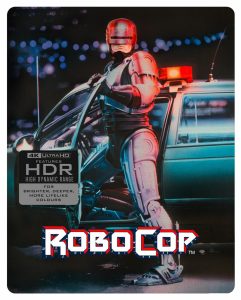 Synopsis: RoboCop, from Orion Pictures, marked director Paul Verhoeven’s (Flesh + Blood) Hollywood debut and instantly became an enduring sci-fi/action classic when it landed in theaters in the summer of 1987. Verhoeven’s peerlessly exciting and kinetic visuals were matched by a sharp script, iconic cast and exceptional special effects by Rob Bottin (The Thing) and Phil Tippett (The Empire Strikes Back). The film takes place in Detroit in the not-too-distant future. Heroic cop Alex Murphy (Peter Weller, The Adventures of Buckaroo Banzai) is gunned down in the line of duty, only to be resurrected as RoboCop – a cybernetic mix of spare human parts and Motor City steel, and the latest defense against crime designed by the all-powerful OCP Corporation. As RoboCop’s memories of his former life as Murphy resurface, only his ex-partner (Nancy Allen, Dressed To Kill) stands beside him to fight against the vicious thugs responsible for his death, as well as a nefarious top-level OCP executive orchestrating the chaos from above. Unsurpassably thrilling, unexpectedly moving and unforgettably hilarious in equal measure, the future of law enforcement is back in a definitive 4K UHD Blu-ray presentation packed with hours of bonus features and exclusive collectable packaging. 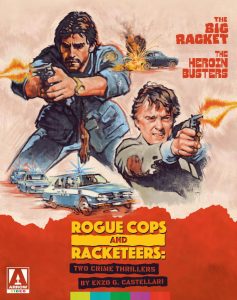 Synopsis: Over a long and wide-ranging career, director Enzo G. Castellari (Keoma, The Inglorious Bastards) helmed some of the most infamous of all the poliziotteschi – the gritty, action-packed crime films that proliferated in Italy throughout the 70s. Buckle up for a heart-stopping thrill ride through the seedy underbelly of Italian society in two of his most celebrated thrillers! In 1976’s The Big Racket, Inspector Nico Palmieri (Fabio Testi, What Have You Done to Solange?) is hot on the heels of a gang of ruthless racketeers. Realizing he’s not going to get anywhere within the confines of the law, Nico recruits a crack squad of civilians to dole out their own brand of justice. Then, in 1977’s The Heroin Busters, rule-flouting cop Fabio (Testi) goes deep undercover, chasing a globe-trotting ring of drug-smugglers suspected to be operating out of Rome. But can he and Mike Hamilton (David Hemmings, Deep Red), an Interpol agent with a hair-trigger temper, stay one step ahead of the criminals long enough to bring them down from the inside? Featuring death-defying stunts, explosive shoot-outs and a pair of addictive, toe-tapping soundtracks courtesy of the De Angelis brothers (Torso) and legendary prog rock group Goblin (Suspiria), these two films represent the crème de la crème of the Italian crime thriller, both making their high definition debuts with stunning new restorations in this feature-packed box set from Arrow! 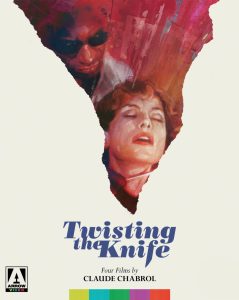 Synopsis: For five decades Claude Chabrol navigated the unpredictable waters of Cinema, leaving in his wake fifty-five feature films that remain among the most quietly devastating genre movies ever made. The Swindle sees Chabrol at perhaps his most playful as a pair of scam artists, Isabelle Huppert and Michel Serrault, get in over their heads. But who is scamming who and who do you trust in a life built on so many lies? The murder of a 10-year-old girl sparks rumors and gossip in The Color of Lies, as suspicion falls on René (Jacques Gamblin) the dour once famous painter, now art teacher, who was the last person to see her alive. Enigmatic, perverse, seductive, Isabelle Huppert encapsulates everything that makes Nightcap a film John Waters calls “Cinematic Perfection” in this tale of suppressed family secrets. Finally, in The Flower of Evil, incest, old money and intergenerational guilt come under the scalpel as an outwardly perfect bourgeois family begins to unravel when the wife involves herself in politics. Though influenced by Fritz Lang, Alfred Hitchcock and Jean Renoir, Chabrol’s voice was entirely and assuredly his own, influencing in turn filmmakers like Bong Joon-ho, James Gray and Dominik Moll. His amused, unblinkered view of life and refusal to judge his characters makes his films timelessly relevant and accessible to all. Arrow Video is proud to present this second collection of films by Claude Chabrol with a wealth of new and archival extras. 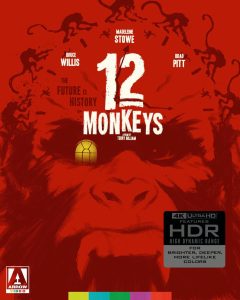 Synopsis: THE FUTURE IS HISTORY Following the commercial and critical success of The Fisher King, Terry Gilliam next feature would turn to science fiction and a screenplay by Janet and David Peoples (Blade Runner, Unforgiven) inspired by Chris Marker’s classic short film La Jetée. In 1996, a deadly virus is unleashed by a group calling themselves the Army of the Twelve Monkeys, destroying much of the world’s population and forcing survivors underground. In 2035, prisoner James Cole (Bruce Willis, Die Hard) is chosen to go back in time and help scientists in their search for a cure. Featuring an Oscar-nominated turn by Brad Pitt (Fight Club) as mental patient Jeffrey Goines, Twelve Monkeys would become Gilliam’s most successful film and is now widely regarded as a sci-fi classic. Arrow Films are proud to present the film in a stunning new restoration.