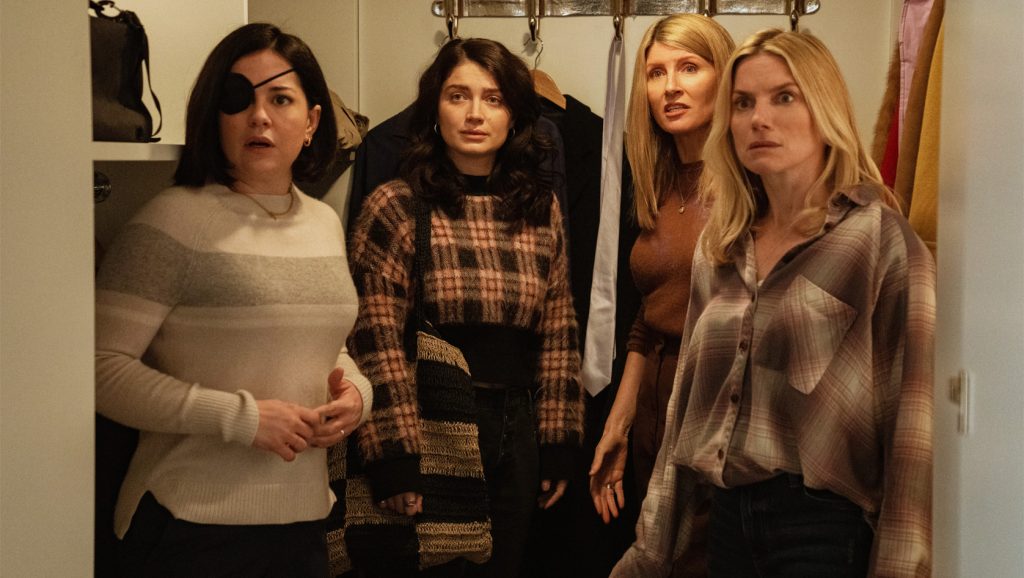 Plot Summary: Follows the Garvey sisters, who are bound together by the death of their parents and a promise to always protect each other.

Recently, we discussed how Apple+ was trying find its own standout series in the wake of streaming domination. Ted Lasso, Physical, and Severance have all been excellent shows that have helped Apple take a bite out of the competition. Well, you can now add Bad Sisters as a stellar offering that has garnered praise from both critics and television fans. The series created by Dave Finkel, Sharon Horgan and Brett Baer manages to spin multiple plates in the air, and, for the most part, never wavers for its ten-episode run. With its brilliant use of fragmented time, this sizzling murder-mystery lures you in and keeps you coming back for more.

The writing is really incredible and never misses a nuance or detail to bring everything together in a satisfying manner. Wisely, outside of its pulpy mystery, this series is also a harrowing drama that boldly tackles subjects such as toxic relationships and assault. The themes that are explored are never less than riveting as viewed through the lens of family bonds, both in terms of sisterhood and motherhood.

In a broader scope, Bad Sisters also explores the damage parents can do to their children. This is most evident in John Paul’s (Claes Bang) childhood storyline of abuse, and in a larger degree Thomas Claffin (Brian Gleeson) who inherited an insurance business by his father who left it riddled by illegal misconduct and near bankruptcy. Being a long form series, the writers use this as their strength and are given the breathing room to really explore their character’s rich and complex inner lives.

Providing some balance is a healthy amount of levity and wit, which nicely keeps things from getting too bleak. The humor is used intelligently and strategically in a way that gels with the story. The show never dilutes its message, but it never feels like a depressing slog either. The writers also throw in some wicked ironic twists-and-turns that make this binge worthy.

While the direction is detailed and the writing whip-smart, it is the cast that truly brings this show to life. It’s really difficult to pick out a standout performance in a show that is brimming with a staggering amount of talent on display. The sisters, Sharon Horgan, Eve Hewson, Sarah Greene, Anne-Marie Duff and Eva Birthistle, all play off each other so well. Yet, each gets their own moments to shine as individuals. Claes Bang is the ultimate bastard, and clearly the Danish actor is having a good time playing such a loathsome character. Bang knows how far to take John Paul without ever going full cartoon super villain. The end result is a chilling portrayal of a true psychopath. Brian Gleeson and Daryl McCormack round out a fantastic core cast. Michael Smiley, who is always amazing in anything he’s in, has a small but great role that leaves an impression.

While the series is great, it is not without its flaws. Most glaringly, this clocks in at nearly ten hours overall, and frankly, it doesn’t need to be. The time taken to develop the characters is appreciated, however, things do start to get repetitive plot wise. The narrative could have easily been streamlined, and the end result can become a bit tedious at times. Nevertheless, this really does not detract from the overall enjoyment this series delivers.

Bad Sisters is a great mystery and a heartbreaking drama all wrapped up in a deliciously sardonic and bitterly ironic casing – the icing on the cake is a fantastic cast. Despite it being overly long, this is a top-tier outing.

Bad Sisters is currently available to stream on AppleTV+.

Bad Sisters is a great mystery and a heartbreaking drama all wrapped up in a deliciously sardonic and bitterly ironic casing - the icing on the cake is a fantastic cast.