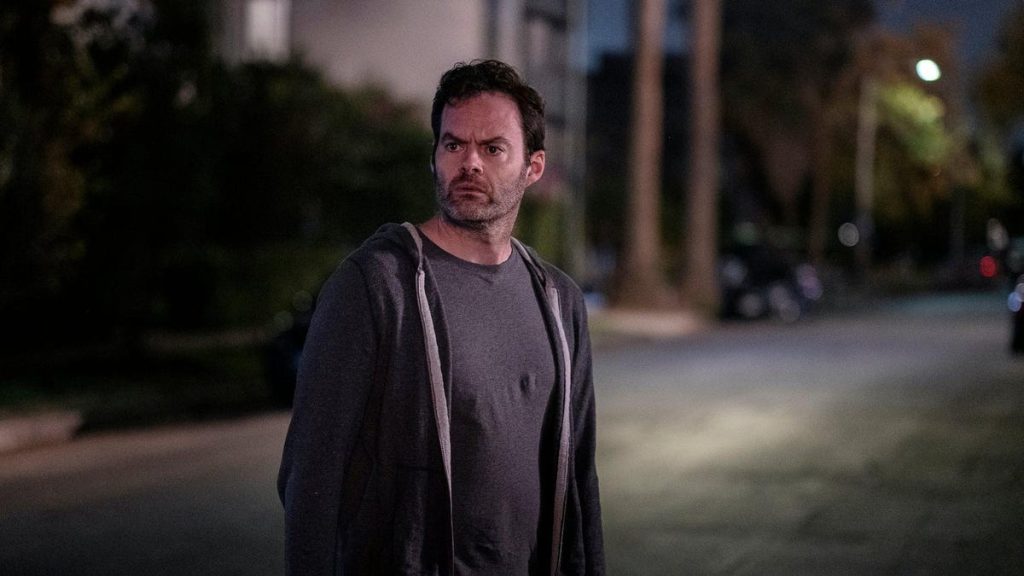 The short of it: Launched into a new register after last episode’s paradigm-shifting revelations, “crazytimesh*tshow” hurdles Barry into new circles of hell summoned by Barry’s past sins.

Reviewing last week’s episode, I brought up the concept of the sword of Damocles. At that moment, I invoked the mythical blade because of Fuches’ dastardly machinations to weaponize his and Barry’s shared past to ruin his former proétgé. With “crazytimesh*tshow,” the swords multiply, dipping even further into the past to dredge up ways to tighten the net. The episode opens with retread of the moment during deployment when Barry cracked and murdered a group of innocent civilians. That snap is set off when Barry’s friend Albert (James Hiroyuki Liao) is shot through the cheek. We’ve never known exactly what happened to Albert. Barry’s retellings of the story always center on his experience, but that changes this week—it turns out Albert became an FBI agent.

Through the first two seasons, Barry got away with his violent activities predominantly because either the law enforcement personnel checking him out was useless, or he killed them before they could become a major problem. The closest call was with Janet (Paula Newsome), and the aftermath there destroyed Barry’s relationship with Gene and nearly sank Barry. However, even in that case, a key aspect of Barry’s continued evasion is that he has not come up against a law enforcement adversary who could match him in terms of experience, training, and brutality. In a few brief scenes, Albert appears poised to change that. A combat veteran with a background parallel to Barry’s, Albert radiates badass energy and suggests a foil to Barry. This is how it might have gone if someone other than Fuches got to Barry first. But now, Albert is ready to go hunting.

Of course, Barry is as unaware of Albert as he is of Fuches’ schemes. The only issue on Barry’s mind is how to get Sally back. In truly classic Barry fashion, regulated human emotion is too alien for him to realize that what happened at the Joplin premiere was a final door slam. It was not a “maybe we get back together after you work some shit out” moment. Nor an “I want to stay friends because I care about you” exchange. Sally’s actions made it blisteringly clear that she wants nothing to do with Barry because she can finally see that he is not a healthy person for her to be with or interact with on any level. Barry doesn’t get it. He thinks it’s a fight, and one that he can fix by finding a way to sidestep the main issue: his compounding psychoses.

That impulse leads him to break into Hank and Cristobal’s home to sit down with them and interrogate them about how to fix his relationship. It is a darkly hilarious riff on the idea of a troubled straight man going to his gay friends for advice, foregrounding Barry’s forced entry as a tongue-in-cheek way to point out the trope’s absurdities. The scene also features Hank giving Barry the clearest and most truthful talking to about his issues that anyone has mounted in the show’s whole run. Barry moans about how he “didn’t yell” at Sally (which he absolutely did) and downplays the situation until Hank dives in. Hank delivers a monologue that results in telling Barry that he is “trying to be two different guys at once, and it’s simply not sustainable,” linking that split personality to the stress and chaos that results in Barry’s mental breaks.

Hank’s statement is effectively the show’s thesis. Everything about Barry’s arc has hinged on his ability or inability to balance his acting and hitman lives, and this season has consistently pushed him closer to the point where they crash together in an inescapable way. “crazytimesh*tshow” uses a Gene-centric B story to underscore the idea. Gene apologizes to a PA he once threw tea on, rents his son a luxurious house with Barry’s (effectively) bribe money, and then attends a dinner party. It’s at that dinner that Gene’s self-aggrandizing apologies smash into the brick wall of someone who refuses to swallow his bullshit. One of the guests is a former actress who Gene got blacklisted after they dated and broke up. The moment she reams him out links back to the issues of Barry’s past coming back to play. Neither man can escape who they were.

And so, “crazytimesh*tshow” climaxes when Barry goes to his and Sally’s apartment to leave the keys and drop off an ill-conceived collage supposed to show who he “really is.” Sally flies into the apartment on the heels of the worst news: Joplin is canceled. The studio gave it 24 hours on the streaming service before deciding that “the algorithm” shows it would be a failure. Never mind the glowing critical reception or the fact that no show can be named a success or failure in one business day. Sally is shaken and devastated, unprepared for Barry’s presence. She accepts his initial attempts at comforting her until Bill Hader slips into one of the most unnerving bits of acting he’s ever unspooled on this show.

Hader gives a speech about how he could break in and gaslight the studio exec until she hangs herself. No concern. No ability to read Sally’s increasingly horrified expressions. Barry charges ahead, culminating in the simple, to him, question of whether or not Sally wants him to head over and start the process. Sally snaps and screams at him to get out, something that Barry is confused by because his sociopathic mind believes he’s offered up a solution that should get him back into her good graces. Therefore, the Barry that leaves the apartment is overwhelmed by a sense of rejection and isolation, discharging a black hole’s worth of consuming fury. This man has alienated or killed everyone who ever meant anything to him. With the formidable Albert in the wings and Fuches’ conspiracy still unfurling, we enter the season’s homestretch with nowhere to go but further down.