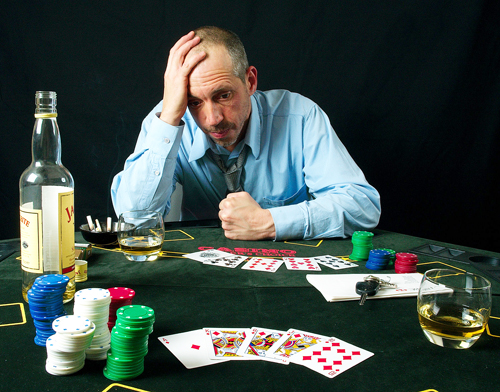 When you lay back at a casino table, you’re constantly taking a risk. You might have heard stories of people who won incredible amounts, but only to lose it later.

These famous gamblers who lost everything are lousy examples of how not to behave in gambling.  Gamblers have a strong desire to play even when they have lost everything. You might think that just one round of bingo online sverige can get all your money back, but sadly that’s not how it works.

You have to play strategically, instead of letting emotions ruin your game. Here is the list of gamblers who went from riches to rags, and gambled away a significant portion of their fortune.

Australia is among the top ten countries in the world with the largest annual gambling losses and with the largest number of biggest losers in gambling history. Harry Kakavas, one of the most losing gamblers in history, lost the majority of his money in an Australian casino.

He was in such a desperate state that he attempted to sue Melbourne’s Crown Casino in an attempt to recoup part of the money he had lost in fortune gambling. So, he risked $1,5 billion in total. Fortunately, he did not lose it all and only lost $20,500,000, which he has fully recovered. Harry’s favorite game was Baccarat, where he often bet $300,000 every hand.

Terrance Watanabe is one of those gamblers who lost everything, or at least a significant portion of what he had. In 1977, Watanabe inherited Oriental Trading Company, which he sold in 2000. Watanabe’s gambling tendencies pushed him into increasingly severe scenarios year after year, and in 2007 he lost $127 million at Caesar’s Palace and The Rio after gambling over $825 million and was regarded as the biggest loser in gambling history. In terms of notable gamblers who have lost it all, Watanabe’s losing run is thought to be the longest ever seen in Las Vegas.

Maureen O’Connor gambling habits swiftly spiralled out of control while she was mayor of San Diego. Nonetheless, when compared to other unhappy and losing gamblers, O’Connor has done a good job of risk management. She bet nearly a billion dollars, but her losses were “just $13 million.” O’Connor is one of the gamblers who has lost everything, having borrowed $2 million from her second husband’s charitable organization and spent it on video poker.

Archie Karas is regarded as one of the most famous gamblers who has lost everything. Archie, who was known for his desire to play big, was not afraid to take any risk in exchange for a better opportunity. He landed in Las Vegas in December 1992 with only $50 in his pocket and a $10,000 loan in the works.

Archie spent the next two years of his fortune gambling playing poker nonstop, collecting a whopping $40 million in the process. But it all started with a poor Archie noticing a familiar figure at The Mirage and asking for the $10,000 loan which would set the gears of fortune in action. He soon turned the money into $30,000 by playing the $200/400 limit Razz and repaid his recipient $20,000.

Archie often negotiated with the casino in order to be able to wager significantly more than the maximum number. At one stage, he reportedly won all of Binion’s $5,000 denomination tokens, leaving the casino deficient on the highest value chips. In three weeks, he lost $40 million, converting himself from one of the most renowned gamblers to one of the most unsuccessful.

Charles Barkley is said to have lost his whole fortune of $30 million on gambling. Barkley’s gambling habits, on the other hand, have never been a source of remorse for him, as he has always been honest about his addiction and has been one of the most famous gamblers.

He claimed that during his time as an active gambler, he must have lost millions of dollars at 30 different casinos. It’s fascinating to hear his thoughts on the subject. Over time, Barkley developed a mentality in which he accepted each loss as a learning experience and was comfortable losing up to $200,000 in a single session and gradually lost it all.

But Sweden is a country which is strict about gambling rules and regulations. License is also given to online gamblers only after hundreds of stages of verification which ensure that gamblers do not lose everything they have. That’s why, in many ways Sweden has tried imposing restrictions on betting, wagering and online gambling in the interest of Sweden’s citizens to prevent huge losses.