Synopsis: Nearly 5,000 years after he was bestowed with the almighty powers of the ancient gods and imprisoned just as quickly—Black Adam (Johnson) is freed from his earthly tomb, ready to unleash his unique form of justice on the modern world.

Heroes come in all forms. On occasion, the smallest and most surprising individual can spark change. Whether it starts a movement, begins a revolution, or saves a cat from a tree, we are all capable of amazing things. Sometimes all it takes is the right circumstances.

“I kneel before no one.”

Finally, The Rock has come to the DCEU! It’s been over a decade of nos, waiting, and wondering, but the time has come for the most electrifying man in sports entertainment to literally become the most electrifying man you’ve ever seen. Directed by Jaume Collet-Serra, Black Adam is nonstop electric-charged fury. The DCEU has just been jolted back to life. This film knew what the fans wanted to see and it give it to us. Is there explosive action? Yes. Superheroes? Affirmative. Powers being constantly used and bad guys being thwarted with zero remorse? You’re damn right. The costumes are badass, the fights are epic, and you get all the lightning that you can handle and then some. Now, the stakes don’t initially seem very high, well, not for Teth Adam, but eventually, they become rather hellish. As enemies are fried and dropped out of the sky, it soon becomes up to the electric Weapon of Mass Destruction and the Hawkman-led Justice Society to set aside their differences in order to save and liberate the people of Kahndaq.

“Tell them The Man in Black sent you.”

The film shines by finally giving the fans a hero or anti-hero that fully uses their powers the way we see them used in comic books. Adam is an unstoppable and unrelenting force and that God-like power is at the forefront of the story. Waking up 5,000 years later, it’s a new world for the Champion of Kahndaq and that means new threats and unknowingly some old ones as well. Feeling that he is a danger to the world, The Justice Society is contacted by a familiar face and instructed to put him down. From there a new team of heroes is introduced into the DCEU and they have an incredibly daunting task ahead of them. As superpowered as the film is, it is also very human. With humanitarian aspects that are very relevant to our present-day world, the humans in the film are just as heroic as our powered individuals and even more selfless. I’d be remiss if I didn’t mention that the film does hit some of the same beats and feature scenes that may remind you of Marvel. However, this film does beat the MCU in introducing a character that was forged in hellfire. The score is confident and bombastic, the SFX are great, and there are some amazing shots. The story is one of redemption, family, and humility, and one that you don’t want to miss. Oh, and make sure you stay for the mid-credits scene—it could mean mindblowing possibilities. Black Adam is easily the most action-packed superhero film to date. Its rewatchability is high.

The pacing of the film is on full tilt from start to finish. It’s no exaggeration when I tell you that they’re very few scenes that don’t involve something getting destroyed or someone being turned into dust. What popped for me was the ruthlessness Teth Adam displayed. Oh, and coupled with the badass one-liners, I can’t wait to see more.

Dwayne ‘The Man in Black’ Johnson was made for this role. For as long as he’s physically looked like a superhero, it’s about time he got to become the one that he and we have been waiting for. He is a pure force in this film. We all know that Johnson commands attention when on screen and this time is no different. If the eyes don’t get you, the lightning will. Sarah Shahi as the fierce mother and protector, Adrianna is the backbone of this film. She not only commands attention but respect as well. Besides Teth Adam/Black Adam, Adrianna was my favorite. The casting of Aldis Hodge as Carter Hall aka Hawkman was perfect. His intensity, tenacity, and view of the world clashed with great force against Adam. Noah Centineo’s Atom Smasher and Quintessa Swindell’s Cyclone fell by the waist side, for the most part, however, they showed flashes of something special that I’m sure we’ll see at a later time. We didn’t get as much Pierce Brosnan as Kent Nelson aka Doctor Fate as we should have, but what we did get was magical. Mo Amer as Karim is also a fun addition that I hope appears later down the road. And lastly, Marwan Kenzari as Ishmael, as well as a few others, may not have been the best villain but he eventually looked really cool.

Black Adam releases in theaters on October 21, 2022. Stay and enjoy. 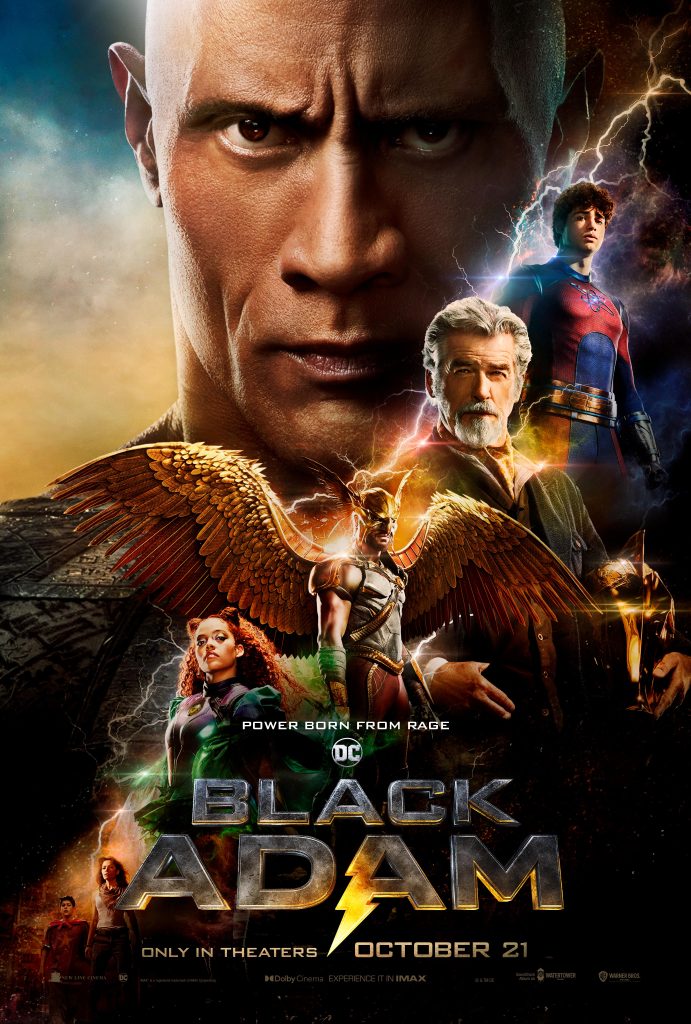