Author Timothy Zahn has done it again. The third and final installment in Zahn’s official canon Thrawn Trilogy, Thrawn Treason was an absolute joy to read. Zahn knows the character of Thrawn better than the back of his own hand by now and he feels just as authentic as ever here. The plot, whilst still strong and gripping wasn’t as intense as the previous two Thrawn books, and honestly the same can be said for the novel as a whole. That doesn’t mean Thrawn Treason was in any way a bad read, it wasn’t and is easily one of the best stories released under Disneys new Star Wars canon since…well Zahn’s last Thrawn book. This book feels different compared to its two predecessors, a little empty at times and its caused by factors completely out of the books own control. Nevertheless, Zahn does the absolute best with what he has.

I’ll keep this review as spoiler-free as possible for those of you who still haven’t had chance to finish it yet, and if you’re a Star Wars fan who hasn’t read any of the recent Disney Canon Thrawn novels, leave now and go and do exactly that. You’ll thank me later. 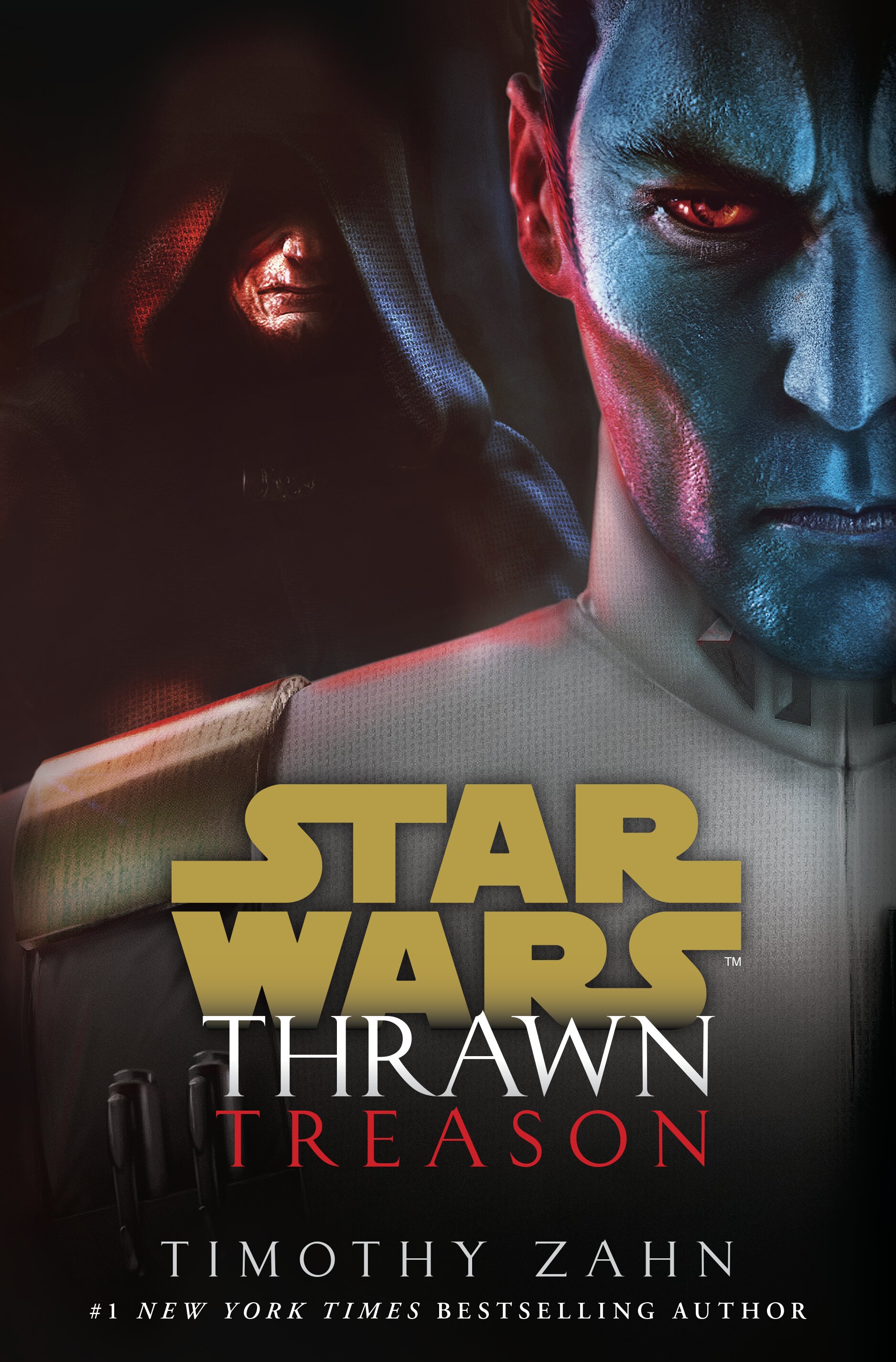 A quick summary of the plot: Fans of Star Wars Rebels will know that the Chiss Grand Admiral makes his on-screen debut on the show, but has a sudden departure from the fourth season for a couple of episodes. He absences from Lothal is explained here, with him leaving for coruscant after Director Krennic (the bright white caped villain from Rogue One) tries to steal funding from Thrawn’s TIE Defender project to speed up construction on his own project: Stardust. Better known to you and mean as the Death Star. The political maneuvering quickly becomes a physical threat as Thrawn is given a seemingly impossible task to help Krennic solve a problem with the Death Stars production lines in order to secure funds for his TIE Defenders. What Thrawn uncovers on his mission turns out to be far more deadly.

The plot itself at first is heavily based on political maneuverings inside the Empire, which is the perfect ground for some incredibly interesting storytelling. Unfortunately, I found it rather hard to care about Thrawn and Krennic’s fighting over the Death Star and TIE Defender because we already know what happens to both Projects thanks to Star Wars Rebels Season 4 and Rogue One / A New Hope. That being said whenever Krennic and Thrawn interacted it was absolutely brilliant. I love both characters and they couldn’t be more different with Thrawn keeping a cool and calculated mind and Krennic feeling rash and self-obsessed. Those types of characters eventually butting heads just makes for some seriously cool moments.

Eli Vanto, a fan-favorite character from the first Thrawn novel returns with a warning to Thrawn about a threat to his homeworld. Without giving too much away, the threat itself did genuinely feel like a serious threat not only to the Chiss but to the Empire as a whole. It was really interesting seeing an enemy force who actually poses a threat to the mechanical might of the Empire, seen as they usually come across as an opposing force of dominance in the movies and in Rebels.

Despite the books best efforts to create some intensity, and in all fairness, it does succeed at times, I knew whilst reading nothing too serious would happen to Thrawn because his eventual fate is shown in Star Wars Rebels. Thrawn Treason is backed into a really tight space being set in the middle of Rebels Season 4 and it does, unfortunately, impact the book from time to time.

Obviously, Thrawn is absolutely brilliant here once again. The Chiss Grand Admiral and my favorite Star War character of all time shines through yet again as an intellectual genius, who not only outsmarts his enemies at every turn but uses his brilliance to try and better those who serve under him. Commander Faro and Eli Vanto are two brilliant examples of this. Both of them aren’t as clever as Thrawn but after serving with him are incredibly smart in their own right. They feel just that little bit more human compared to Thrawn, mainly helped because they, of course, are human. I found myself connecting with them more and more throughout the book. When they were trying to figure out Thrawn’s plan, I was right alongside with them doing the same.

Commander Faro espcially caught my eye, as someone I found myself enjoying more and more as the book went on. She holds her own throughout and proves time and time again that even without Thrawn by her side she is a formidable leader. Eli Vanto almost acts as the opposite of Thrawn in this novel. Whilst Thrawn is the only alien in an Empire full of humans, Eli Vanto is the only human in the Chiss Ascendency. Their parallel stories were incredibly interesting and seeing Eli’s return to the Empire he left in the first Thrawn book was fantastic.

There’s also a brand new character introduced in Thrawn Treason, named Assistant Director Ronan, who you can probably guess by the name is basically a mini-me version of Director Krennic. Even down to having a shorter white cape with his uniform. I surprisingly really enjoyed him here and his character arc through the novel gripped me more than I thought it would, as did his growing relationship with Thrawn.

Admiral Ar’alani is a character featured in the first Thrawn novels epilogue, and now she gets to take a more prominent role. She is also a Chiss Grand Admiral, although her allegiance is to the Chiss Ascendency, not the Empire. She shares Thrawn intelligence, although I’d wager he’d edge her out in a battle. Ar’alani is incredibly enjoyable in her own right, and her back and fourths with both Eli and Thrawn were really interesting to read. She visualizes the Chiss Ascendency and Thrawn’s own race of people. Having her by Thrawn’s side reminded us that Thrawn is still split between his own people and the Empire he’s supposed to be loyal too. Again, this would be a nail-biting dilemma for Thrawn if we didn’t already know what happens to him in Star Wars Rebels.

Thrawn Treason is a fantastic read, and is a must-buy for fans of the character, however with Thrawn’s eventual fate already being known thanks to Rebels, and the eventual fate of both the TIE Defender project and the Death Star also already being known I don’t know if this is worth picking up unless you’re a hardcore Thrawn Fan. The battles are as intense as they can be, the internal workings of Thrawn’s mind, fascinating, and the climax of the novel is truly amazing in my opinion even with the whole book having a bitter-sweet feeling to it.

Treason warps up Thrawn’s current canon story nicely and now opens up the possibility of exploring exactly what happened with Thrawn and Ezra Bridger after the events of Rebels season 4, a story I desperately hope Disney allow Timothy Zahn to tell.