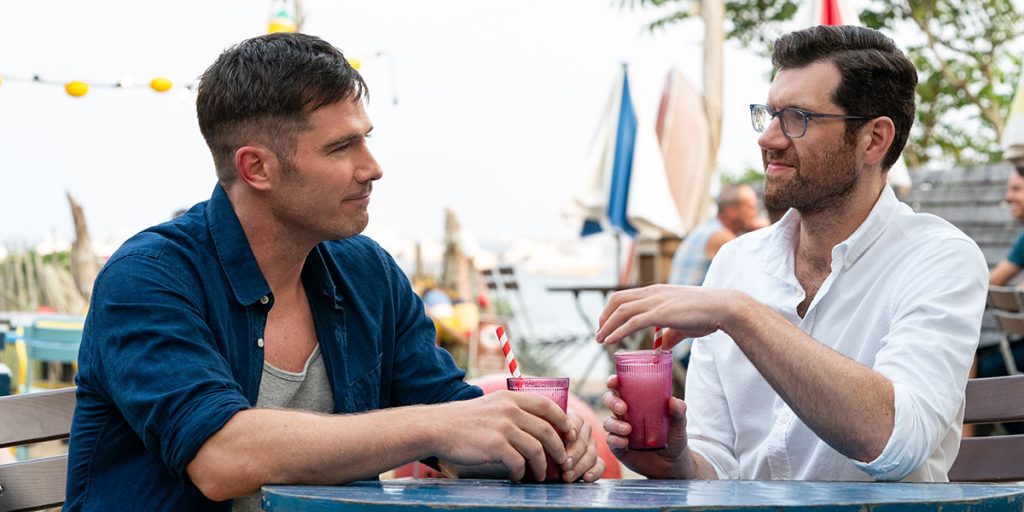 Watching Bros, you can’t deny that history is being made.

The film, directed by Nicholas Stoller (Forgetting Sarah Marshall) and co-written with star Billy Eichner, is the first gay romantic comedy released by a major movie studio (Universal Pictures). With major studio backing comes expectations that preceding queer rom-coms might not have faced with their indie bromides. Bros ultimately tests how far we’ve come in LGBTQ representation and acceptance, and how far we still must go.

It’s a good equilibrium until he meets Aaron (Luke Macfarlane) at a party. Aaron is Bobby’s polar opposite: hunky (and perpetually shirtless), laid back, and unsettled in his career and identity. They share a flirty rapport and a disinterest in dating, which leads them into a semi-casual arrangement that upends their expectations of each other and themselves.

The will-they-won’t-they format is old hat for rom-coms and lends Bros a sense of familiar predictability. Brilliantly, that is where the similarities end. The film gleefully upends the genre’s genteel conventions to authentically reflect the many dimensions of queer life. Bobby’s work at the museum gives us a reverent, compelling look through the annals of LGBTQ history. (Which is far more complex than it’s regularly given credit for.) There is little you won’t see in the film. Polyamory? Yes. Group sex? Twice. A montage of kinks set to Nat King Cole? Absolutely. What’s refreshing about this sexual smorgasbord is that it exists outside of the straight gaze. The film makes no apologies for detailing and making light of queer sex. If you can appreciate and enjoy it, great, but it will happen whether you do or not. Considering its studio backing, that approach in and of itself is pretty revolutionary.

When Bros isn’t shattering studio conventions or offering a long-overdue celebration of queer history, it is also hilarious. Not since Bridesmaids has a film gotten so much mileage out of jaw-droppingly off-beat humor. The script is bursting at the seams with topical one-liners and eyebrow-raising quips, with both easy and deep-cut pop culture references. The first 30 minutes, in particular, contain a delicious, nearly-endless barrage of jokes, one of the strongest comedic stretches of the year. (Some lines nearly made me fall out of my chair and gasp in shock.) As a comedy, Bros is audacious, daring, and pretty much perfect.

Where the film trips up is its handling of the “romance” in “romantic comedy.” Bobby and Aaron are likable characters, with enough quirks to make them feel like people, not rom-com cutouts. However, there are times when it’s hard to see what they see in each other beyond their messiness. Their story is a mash of false starts and miscommunications that rob us of the chance to get a feel for them as a couple. The film does find its romantic groove towards the middle, where Bobby and Aaron make funny but gentle strides towards true emotional and physical intimacy. By that point, however, we’re already barreling towards that inevitable genre-required disconnect when it would’ve been nice instead to live in their bubble a little longer.

That disconnect also reflects Bros’ tendency to be too hard on its characters and the community it seeks to celebrate. Sometimes, the jokes about gay men being incapable of genuine romance feel either too repetitious or too literal. It’s wrong to suggest the film is trying to pander to straight audiences, especially given what else is happening throughout. Perhaps Billy Eichner’s penchant for self-deprecation, already a key pillar of Bobby’s arc, ran amok. Whatever the case, I wish he had been kinder to himself when conceiving this part of the story.

With Bros, Eichner demonstrates his skill as a comedic writer and budding leading man. In front of the screen, he possesses a self-assuredness that makes him a joy to watch. As you’d expect from his work on Billy on the Street, he has impeccable comedic timing. His dramatic chops are also impressive, especially in how he still allows glimmers of humor to shine. Luke Macfarlane makes for a charming counterpoint to Eichner’s always-on presence. He has a cool, grounding effect on the shenanigans around him, buoyed by his own sense of humor and genuinely affecting emotional depth. (He outshines Eichner in the latter regard.) Their romantic chemistry wavers throughout the film – they’re better adversaries than lovers – but they occasionally land on moments with real sparks.

Bros largely delivers on its ambition to tread new ground as a major studio-backed queer romantic comedy. Billy Eichner and Nicholas Stoller developed a film that lives within and disrupts the rom-com rules in an unapologetic but accessible way. Even with its weaknesses, it is a strong entry into the canons it seeks to claim and lays a path that other filmmakers can follow with the same level of humor and heart.

Bros had its World Premiere in the Special Presentations section of Toronto International Film Film Festival 2022. The film will be released in theaters on September 30, 2022 courtesy of Universal Pictures.