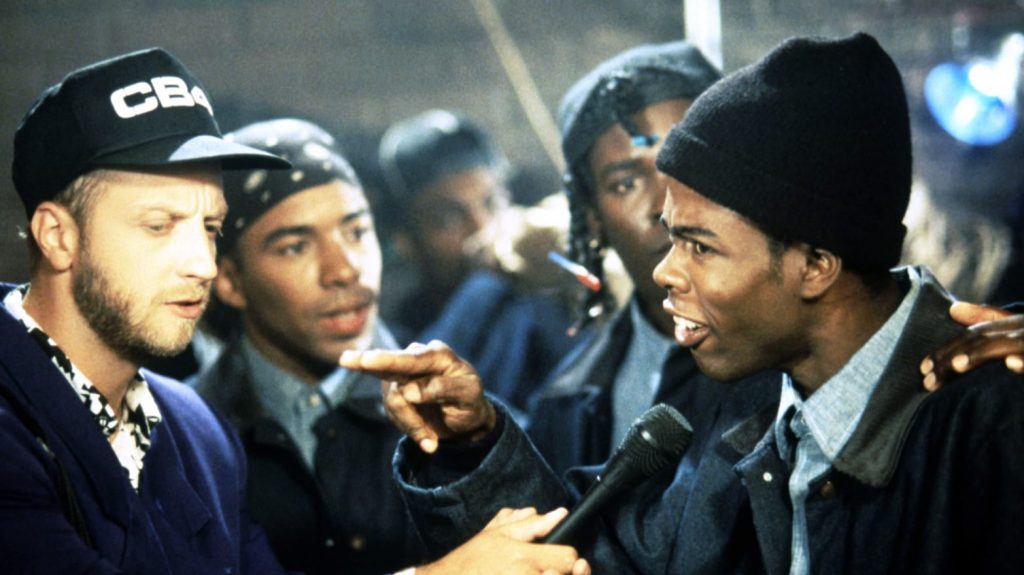 While not a huge box office success partially due to one of the largest snowstorms the east coast had ever seen, CB4 lives on as a pivotal moment in the career of Chris Rock. Before he had even gotten a shot on Saturday Night Live, Rock was a young, burgeoning comedian with the idea for a “Hip Hop This Is Spinal Tap” that would deftly balance broad mainstream comedy with clever industry satire. Together with prolific writer Nelson George, the two crafted a vulgar comedy that could make general audiences howl with laughter but also have something to say about the marketing of the “Black” experience for monetary gain in a way that deserves way more credit than it was given at the time. That this movie was made by a white woman, Tamra Davis (Guncrazy, Billy Madison), is a bit surprising, but less so when you look at her laundry list of music video credits that practically defined an era of Hip Hop. The film is crude and offensive, but when you examine it closely you can at least partially attribute it to the satiric nature of the piece. Even when not viewed intellectually, the film is simply an uproariously funny time.

Chris Rock plays MC Gusto, the de facto leader of an NWA-inspired group known as CB4 which he performs in with Dead Mike (Allen Payne, New Jack City) and Stab Master Arson (Deezer D, ER). The group is one of the hottest on the charts thanks to their “I don’t give a damn Hip Hop attitude” that is so authentic. Their rise to fame has been chronicled by A. White (Chris Elliott, Schitt’s Creek) with everyone from Ice T to Halle Berry to Shaq making appearances as themselves to talk about how hardcore they are. The only problem is, everything is a lie. MC Gusto is actually Albert Brown, a “soft” boy from a decent family who for years has been trying to perform music with his friends Euripides (Dead Mike) and Otis (Stab Master Arson). The Bagheads? The Overweight Lovers? None of their personas clicked. It is only when Albert takes on the real-life persona of the recently incarcerated Gusto (Charlie Murphy, Chappelle’s Show) that they begin to find success. Instant fame is great until you start to lose who you are, plus the man whose persona you stole gets out of prison. 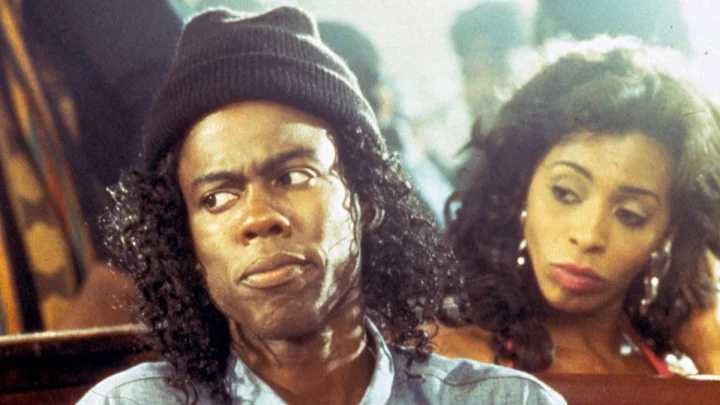 CB4 is so viciously funny because it understands Hip Hop culture so thoroughly inside and out. By knowing a subject so well, they can make the most specifically funny jokes that will have you belly laughing. The film is a ruthless assault on “studio gangsters” and the system that was built up to make “dangerous” Black men more interesting to general audiences. One of the most obviously satirical and hilarious scenes in the film is the group’s initial interview with their manager, Trustus Jones (Willard E. Pugh, Air Force One). “Do you cuss on your records? Do you defile women with your lyrics?” These are just a few of the requirements to get a record deal. The film also has much to say about the relationship between Hip Hop and press (see Theresa Randle’s character), as well as the place of groupies (Khandi Alexander damn near steals the entire film in her hilariously outrageous performance). You even have the wonderfully deadpan Phil Hartman as the surrogate for American morality that is knowingly sanctimonious. No character is wasted in delivering the jokes and furthering the satire.

The other areas where the film really makes an impression are the parody songs that are surprisingly listenable. There is of course the most straight-ahead parody “Straight Outta LoCash” and their nasty hit “Sweat From My Balls,” but even songs like “I’m Black, Y’all” will leave you dying laughing with how it excoriates performative “Black power” without the conviction to back it up. This movie has many clever layers to delve into, but it also does the obvious silly jokes extremely well like a “Big Ass Biscuit” gag that is sold by some prop humor and a wild sex scene with Khandi Alexander that really goes places. Even with its dated and problematic elements, the film offers up so much smart and dumb humor that it is hard to dismiss it. With Tamra Davis behind the camera, the humor is not as unintentionally gross as it could have been and the pacing is snappy with an “all killer, no filler” mentality. This movie has been a cult favorite for years, but it is time for CB4 to get some more widespread recognition for the clever satire that it is. 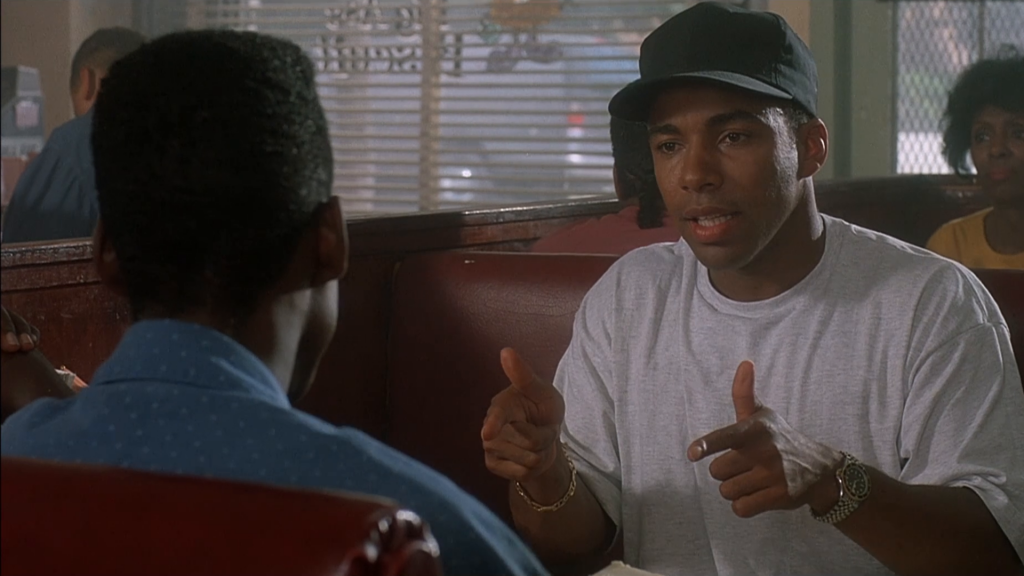 CB4 comes to Blu-Ray from Kino Classics with a digital AVC encoded 1080p transfer in 1.85:1 that appears to be derived from an older master that is in decent but not outstanding shape. The presentation is fairly pleasing throughout most of the runtime with image stability and delineation being strong. Instances of print damage are few and far between, but overall clarity and detail is lacking a bit. The film thankfully does not present with much in the way of unnatural digital tinkering. This transfer has some natural film grain, but you have to contend with it being unstable and a bit clumpy in instances. The picture can run a bit soft in long shots, but colors are natural even if they are lacking extreme depth. Black levels hold up fairly well with little in the way of crush. This presentation is good, but a new scan would likely do wonders for the film.

This new Blu-Ray comes with a lossless DTS-HD 2.0 Master Audio mix that offers a powerful presentation that represents the film how it is supposed to sound. This is a film pulsing with music from beginning to end, and it is presented with a dynamic fidelity. The classic soundtrack is replete with amazing songs that fill up the room quite nicely. The dialogue holds up wonderfully, coming through clearly without being stepped on by the music or sound effects. The environmental effects are delineated nicely from the sounds at the club to the busy traffic noises. The track avoids any instances of age related wear and tear or distortion. This is a track that represents the film perfectly. Optional English subtitles are provided on this disc. 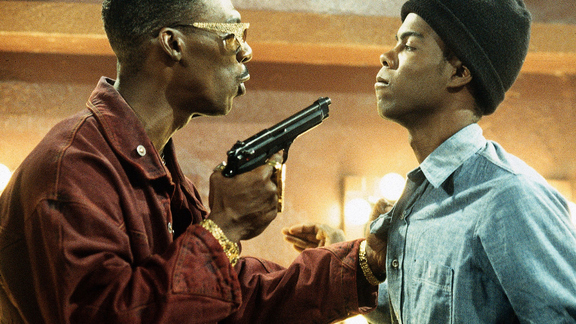 CB4 is a clever send-up of Hip Hop culture as presented through the mainstream marketing machine. The film has thoughtful insights to provide to the right audience, but those just looking for a surface-level fun time will still be laughing from beginning to end with its mixture of highbrow and lowbrow jokes. Chris Rock delivers an early standout performance alongside a fantastic ensemble that elevates this film to even higher heights. Kino Classics has released a Blu-Ray with a decent A/V presentation and some key special features that are not to be missed. If you are a fan of the film, you will be thrilled to finally own this one in HD. Recommended

CB4 is currently available to purchase on Blu-Ray.