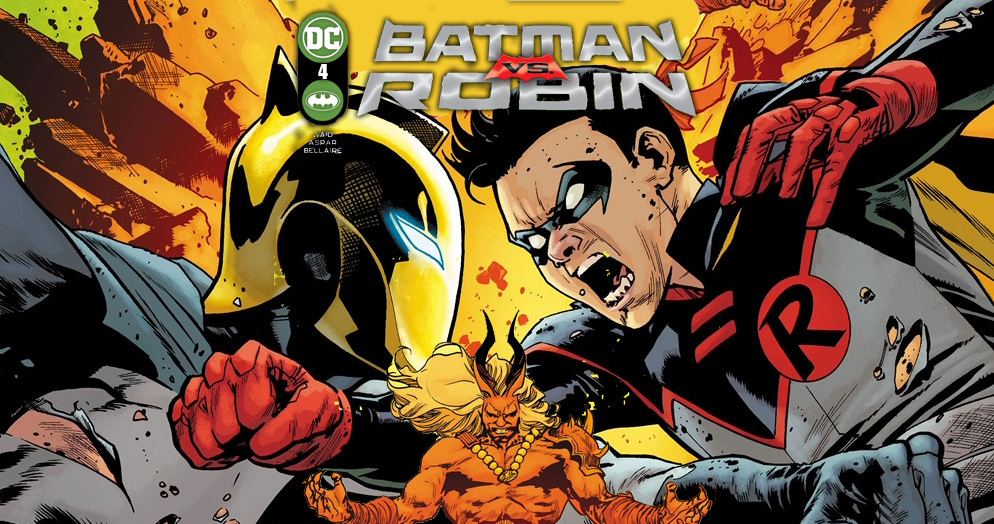 The much-anticipated premiere of Batman vs Robin by Mark Waid and Mahmud Asrar has finally arrived. Fans and critics alike have sung the praise for this new exciting chapter in the Batman narrative. Not being ones to rest on the laurels, DC is already getting fans ready for what is to come in the series with this preview of Issue four. As described in this recent press release:

The Lazarus Volcano Erupts in ‘Batman vs. Robin’ #4!

DC’s new comic book event miniseries by Mark Waid, Mahmud Asrar, Jordie Bellaire and Steve Wands, Batman vs. Robin, launched this week to incredible praise and even more questions. Is Alfred Pennyworth back from the dead? Will Bruce and Damian finally be able to resolve their differences? The reviews are rolling in!

Praise for Batman vs. Robin #1

“If this first issue is any indication, the team behind Batman vs. Robin #1 have crafted a dramatic and gleefully fun rivalry that could shake up the larger DC mythos in the process.” —ComicBook.com

“Waid, Asrar, and co. all know what kind of story they’re telling, and lean into the bombastic event elements to great effect.” —The Beat

“Batman vs. Robin promises to be a truly incredible showdown spanning the history of the Dark Knight and DC.”—CBR

“If you’re looking for good action and triple-A artwork, look no further than Batman vs. Robin.” —AiPT

“Waid is a master of the DCU, same as he ever was, and I’m expecting this to be an event mini to remember.” —GeekDad

“This is the DC event book to watch through the end of the year. It’s eerie, action packed, and hits all the emotional beats. In other words, a must-read.” —Comicon.com

“Batman vs. Robin #1 is captivating from start to finish and will have readers eager for more.” —Comic Watch

Looking ahead to where this exciting, magic-based event series takes readers between now and the new year, a final battle erupts between Batman and Robin at the heart of Lazarus Island in Batman vs. Robin #4 on December 20th. In this penultimate issue, a strange tremor rocks the combatants to their senses…

This isn’t an island at all—it’s a volcano!

With the Devil Nezha pulling the strings and unbelievable transformative power about to explode out into the world, our heroes have no choice but to do the unthinkable—fall back! DC’s battle between father and son goes global as the Earth enters into the Lazarus Planet!