Belgian sleuth Hercule Poirot’s Egyptian vacation aboard a glamorous river steamer turns into a terrifying search for a murderer when a picture-perfect couple’s idyllic honeymoon is tragically cut short. Set against an epic landscape of sweeping desert vistas and the majestic Giza pyramids, this tale of unbridled passion and incapacitating jealousy features a cosmopolitan group of impeccably dressed travelers, and enough wicked twists and turns to leave audiences guessing until the final, shocking denouement.

Can you honestly say that you trust those that you surround yourself with? If something sinister were to happen to you, would those closest to you be the ones responsible? You can never know the true intentions of any one person, however, I think most of us have learned to keep our friendship circles small. Not only is it easier to love and put your trust in a small group, but if you ever had to defend yourself, it’s less challenging to combat five than twenty. Not to mention, how well can you really know an abundance of people? You’re going to make enemies in life whether you’re the most stupendous person or not, humans are odd like that. Nevertheless, you should never let that discourage you from doing the right thing or being a decent person. Being yourself will attract those with like minds and similar energy, but also those who only want to feed off of that. Spotting those who only want to take advantage of you isn’t always easy to do. Unfortunately, they are charming liars and master manipulators. So be present in your relationships, remain diligent, and weed out who is unnecessary and maybe you can avoid anything negative happening to you. Stay friendly.

Would you do anything for love? Could greed cause you to do unspeakable things? Maybe even commit a murder? Directed by Kenneth Branagh, Death on the Nile is a love meets rage whodunnit that sadly falls short of fantastic. Despite its top-notch cast, the film harbors a confusing tone along with a  thinly veiled mystery. What should’ve been an impressive and exciting murder mystery, is unfortunately just okay. Now, the film isn’t terrible, it just doesn’t meet its own standards. We all enjoy a good thrilling mystery and the story provides that. Multiple characters with more than enough motive, a fiery entanglement, jewels, and an abundance of wealth, and the lone inspector to solve it while also trying to avoid a bloody fate. However, it shouldn’t take half of the runtime to get to the actual crime. Each character gets their own individual intro into the story, but instead of integrating them into the story’s flow, it feels like a classroom’s roll call.

Once it gets to the meat of the story, we get to put on our sleuthing hats and the fun begins. However, the fun may end rather quickly for some as the film makes it rather obvious who is responsible for the bloodshed. You may not the exact play-by-play of the crime but I was one hundred percent certain who was guilty and I ended up being correct, even with the slight twist. Nevertheless, I still enjoy watching as the pieces get put together. Everyone will not have that same experience and some will really enjoy the journey but it will result in some divisiveness. The film does have somewhat of an identity crisis. I couldn’t tell if it wanted to be a remake of the 70s classic or a step-sibling of Knives Out. Tonally, the film was all over the place. Subsequently, I couldn’t tell if it wanted to be a serious thriller or a dark comedy. Where the film succeeds is its score and soundtrack as well as some key performances. The sound of 1930s swing and jazz fills the air resulting in some delightful toe-tapping along with some steamy and joyful moments. Since filming in Egypt isn’t possible, most of what we see is CGI when it comes to famous structures and landmarks, it’s great at times and questionable at others. The hair, makeup, and costume design are rather stunning. It’s hard not to stare at Kenneth Branagh’s mustache in every scene. It even gets its own origin story. There is plenty to like about this film but it’s not without its flaws. Death on the Nile will be a film that most will either love or will fall into the “eh” category. I may not have had a great time, I still had a decent time. Its rewatchability is low.

The film is a tone away from being a slow burn. While a story such as this does need time to establish motives and tension, it takes a bit longer than I think it needed to. It feels as if it took a detour and got lost for a while. What popped for me was the mystery. Once we got there, it was a lot of fun trying to figure out who did it. Even if you figure out who the assailant is shortly after the murder, it’s still interesting to see who the web is spun.

While the cast of rife with talent, there aren’t too many performances that really jump out at you. Linnet Ridgeway (Gal Gadot) is loved and envied by everyone, especially by those closest to her. However, she isn’t the most likable person so you may not care too much about her well-being. Emma Mackey as Jacqueline is my favorite performance. She is full of intense rage and unshakable love. Her unhinged performance is all in her eyes. I also really enjoyed Tom Bateman as Bouc. He gave the film some heart as he and Rosalie (Letitia Wright) were fighting for something real. Unfortunately, I couldn’t always understand Kenneth Branagh. He spoke rather quickly with a very thick accent which usually isn’t too much of an issue but on occasion, it sounded like confident mumbling. Armie Hammer as Simon is the most suspicious of them all and plays the role to a tee.

Death on the Nile releases in theaters on February 11, 2022. Stay safe and enjoy. 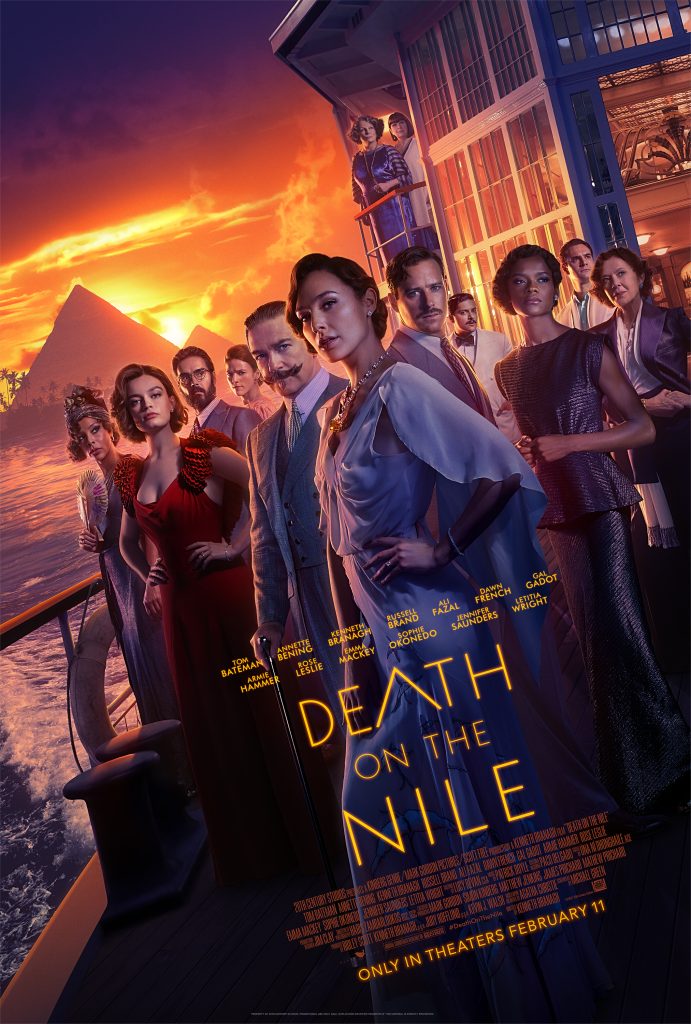 Based on: Novel by Agatha Christie