‘Employee Of The Month’ Tribeca 2022 Review – An Entertaining Dark Comedy 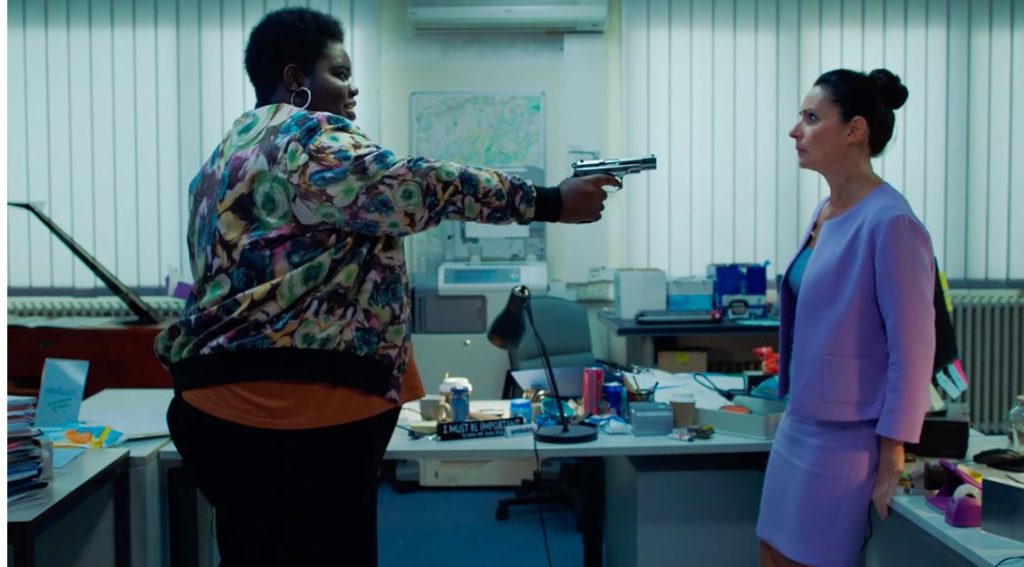 Hell hath no fury like an underappreciated woman scorned.

Ines (Jasmina Douieb) is an eager to please, middle-aged legal expert working at a company that sells cleaning products. She’s kind, attentive, and a diligent worker. She spends her days going above and beyond at her job, while also serving as a secretary, custodian and the HR department. Ines’s jerk of a boss, Patrick (Peter Van Den Begin) and the rest of the mostly male staff, spend their time taking advantage of her kindness. Things take a turn for the worse, or perhaps the better, when she accidentally kills Patrick while requesting a raise. Her intern, Melody (Laetitia Mampaka) finds herself pulled into the situation as an accomplice.

Things continue  to escalate as Ines is eager to seek revenge on all of those who’ve wronged her in the workplace. As her co-workers begin to catch on to Patrick’s demise, she has to murder them to keep her and Melody’s secret.

Employee Of The Month is an entertaining dark comedy that is at times frantic, tense, and scathing. Douieb does such a great job of bringing the sweet, but spineless Ines to life. You can’t help but feel sorry for her and share in her glee as she moves from one murderous scenario to the next. One of the best things about Douieb is that she does a lot of acting with her eyes. By that, I mean that whether she’s menacing, disappointed, or nervous, her eyes sell you on it. It’s extraordinary to watch and allows the audience to catch on to things before they’ve been stated within the story.

Mampka is sweet, funny, and sardonic as the office intern, Melody. You can see from early on that she is empathetic to Ines’s plight, but feels powerless to stop it. Later, she finds herself going from unwilling accomplice to someone who revels in helping Ines get her revenge. Watching the two vastly different personalities play off each other is a joy, and the actresses really sell the viewers on this odd pairing.

For what it’s worth, Peter Van Den Begin does a great job of making Patrick an insufferable, sexist pig who you don’t miss once he receives his murderous comeuppance. His death is hilarious and Begin will have you laughing to yourself as his character takes his final breath. While the role isn’t a huge one in the scheme of things, Patrick’s actions definitely help the viewer understand the catharsis Ines takes in dispatching the people in her office one by one. We’ve all encountered a Patrick in the workplace, and we usually don’t miss them once they’re gone.

One of the interesting things about this film is that it has a distinct sketch comedy vibe going for it. It’s not a bad thing, but you can’t shake the feeling that this could have easily been a Saturday Night Live sketch, instead of a full-length film. Again, this isn’t a bad thing, but certain ridiculous moments might have viewers rolling their eyes a little. The comparisons to the comedy classic, Office Space, are inevitable as well.

The main strength this film has is not the dark comedy, but the real world commentary it offers on being the underdog and undervalued in the workplace. It also shines light on the disturbing amount of sexism women endure in the workplace from their peers. Whether it’s crude drawings, uncomfortable comments, or the expectation that they will play a motherly role to other employees, the film drives home the very stark realization that women often find themselves on guard at work when they should be free to complete their tasks and duties without egregious harassment. It’s eye opening and gives viewers much to think about.

Whether you watch this film for the comedy or the commentary, Employee Of The Month is entertaining from start to finish.

Employee Of The Month is an official selection of the 2022 Tribeca Film Festival.

Whether you watch this film for the comedy or the commentary, Employee Of The Month is entertaining from start to finish.