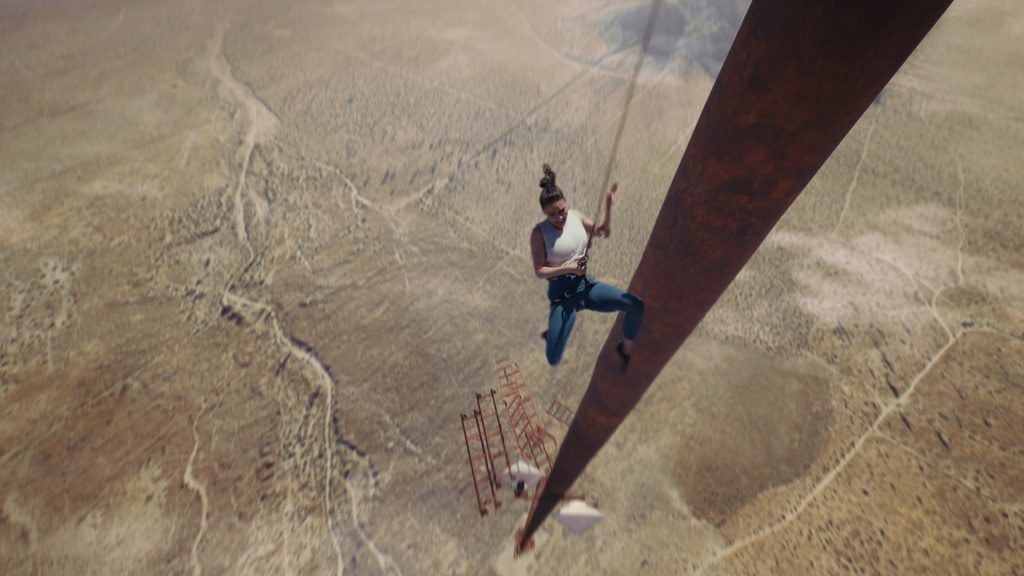 Fall isn’t a great movie, but it isn’t a bad one either. It does what these movies are supposed to do, and does it surprisingly well. It’s an adrenaline-rushing, vertigo-inducing film. Director Scott Mann (Heist) has created a nerve-wracking, edge-of-your-seat thriller. Even though it is somewhat monotonous at times, the two outstanding protagonists, Becky (Grace Caroline Currey) and Hunter (Virginia Gardner), make up for it in the end.

Becky is a recently widowed mountain climber, as we see her husband fall to his death in the terrifying opening scene. A year later, she’s drowning her sorrows in alcohol and ignoring her father’s concerns (Jeffery Dean Morgan, who gives the worst performance I’ve ever seen from him), with a cardboard box on the table still staring at her that says “human remains” on it. Her best friend, Hunter, a daredevil and extreme sports vlogger who has thousands of followers on social media, wants to get Becky to conquer her newest fear and climb this 2000-foot-tower in the middle of the desert, and where they can also scatter her husband’s ashes so they can say he went on one last climb and be remembered by doing what he loved doing best.

Mann really knows how to sustain the sheer suspense of the film, and that’s where the film shines best. It does well to give the audience that “oh sh*t moment!” as I found myself saying multiple times throughout the movie. The film does a great job of constantly keeping the audience guessing about what’s going to happen next for these girls. At one point, you see Hunter hanging on the side of the tower filming footage for her Youtube channel. In the more obvious survival thrillers, she would have died right then and there. There are quite a few moments like this. I appreciate it when I watch a film like Fall and it’s not totally predictable. When you are prepared for the worst to occur, it doesn’t. In that sense, Fall does well in improving the genre and not making it so predictable and boring.

This film has such a gimmicky plot. You would expect the acting to be atrocious, but that isn’t the case here. Curry and Gardner are dynamic opposite one another and do a good job of portraying a friendship that is both believable and uplifting to the film. They have quite a few moments that bring emotion to the surface, and makes you feel for them. They also have some cute and funny moments which brings some relief when you need it, and, in a film that keeps you constantly hanging on, you want that relief. Again, this isn’t anything Oscar worthy in regards to performances or even the story for that matter, but it is better performed and told than other films of its kind in the past. However, I cannot help but feel that there are a few plot elements that were pointless and didn’t really need to be in there just to add more emotion. It feels very forced and slows down the movie a bit too much, but it isn’t that big of a deal breaker.

With its great performances also comes great cinematography. No, it isn’t a Nolan film, but what MacGregor does with some very unique and well-shot pieces adds that much more to the film, and it doesn’t feel like other B-movies of its kind. MacGregor also shot the film Vivarium, and for these to be the only two features he has on his resume, there is some fine work here. He has a great eye for style and does well melding that together with the not so great CGI at times, but it works in its favor. The VFX are what you expect in a film like this. It can be a little distracting and not believable at times, but it could have been a lot worse. With the exceptional cinematography to pair with it, it isn’t too big of a problem.

Clocking in at 107 minute, I cannot help but feel that the movie is too long and stretched out for its simple plot. Scott Mann was joined by Jonathan Frank to pen the script. They could have done without some of the things that feel like very forced, unneeded plot points that honestly don’t really add anything to the story. Moments that happen somewhere off-screen that have nothing to do with the story itself. This just felt like they were trying to add more to the length of the movie, which ended up just making it drag. The film would have been that much better if they had cut 15 minutes off of it and just got to the point. However, it does what it needs to do and does it well. With a decent story, great performances, and utterly beautiful shots, the film is a solid and refreshing entry in the survival thriller genre. Thanks to Mann and Frank, it was full of suspense and harrowing moments that made you scream “f*ck no!” It shows us cinema can still be simple but effective.

While 'FALL' is not without its faults, its still an adrenaline-rushing, vertigo-inducing film