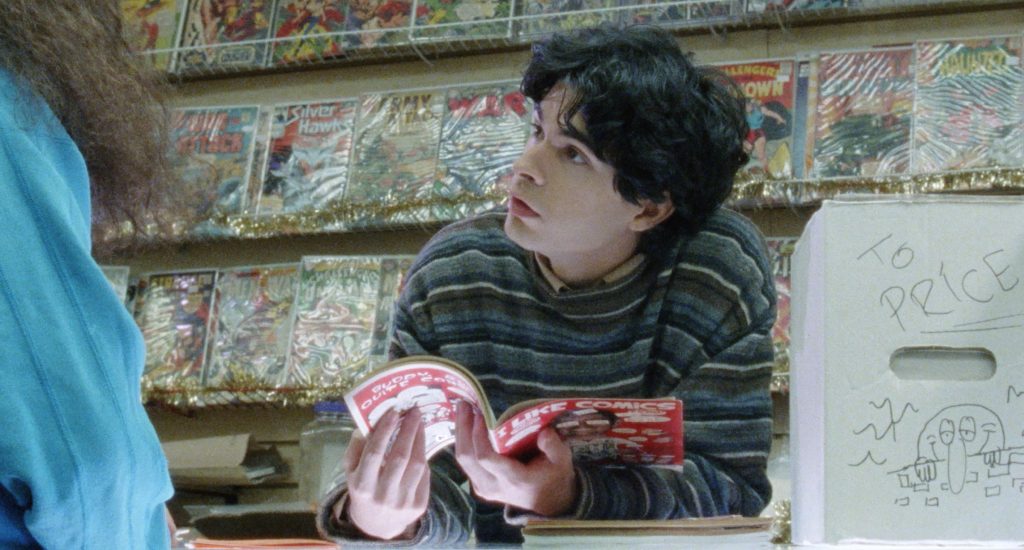 Owen Kline’s first feature-length film Funny Pages, produced by the Safdie brothers & distributed by A24, has a lot going on underneath the surface. Kline has had a history working with the Safdies as a crew member on set during their early films and acted in John’s Gone, a short film of theirs from 2010. The influence Josh and Benny Safdie has made on Kline is hard to miss. But Funny Pages isn’t wholly dependent on the Safdies’ own style; Kline’s own voice starts to emerge, using their style as a framework (let’s call it a comedy of errors) to tell a story of his own branding. It’s apparent that Kline has more stories to tell, and Funny Pages is a foundation of how he wants to tell them, serving as a mouthpiece for his personal stylings. If you’re already familiar with some of the Safdies films you’ll likely get a nice surprise in Funny Pages.

Kline’s film opens on Robert, a high school student who knows he’s destined to draw comics for the rest of his life. He’s been studying with Mr. Katano, a mentor for Robert’s perverse illustrative technique: a brisk & outwardly goofy style reminiscent of Max Fleischer’s clean lines, Peter Bagge’s oblong shapes and R. Crumb’s sexual irreverence. A botched lesson leads to Katano’s sudden death, shocking Robert but also inspiring him to run with what he’s learned to try and make it in the industry. His best friend in school, Miles, is his biggest fan, jumping at the chance to own any copies of Robert’s original comic books and eggs Robert on to pursue his dream. Robert is so confident in his abilities that he announces to his parents he will quit school, get a GED, abandon his assumed destiny to attend college, and become a successful artist in the comic book industry. His parents take issue with him over dropping out, especially his plan to trash higher education, but don’t seem to mind much when he moves out of their cozy Princeton residence to live in poverty-stricken Trenton, a stone’s throw away from home.

He picks up part-time work at a local comics store and a public defender’s office (funny story), lives in a technically-illegal boiler room unit in the basement of a house with two middle-aged men, and is given the use of a near-death hooptie. Robert transcribes meetings for Cheryl at the law office and starts to settle into a kind of routine, until he overhears a meeting with an unusual client, Wallace, who has had grievances at a local Rite-Aid but also had a work history at Image Comics. Robert immediately gloms onto Wallace, trying to get a foot in the door to an industry he hasn’t worked in for years. Robert sees a way out through Wallace, and is willing to try anything he can to make it to the top.

Funny Pages would be misrepresented and sold short as dark comedy and nothing more. It pulls a little to the left, leaning on its tragedy to combine hand in hand with medicinally peppered comedic gags that relieve just as much as it torments, but nothing truly reaches an absolute, always existing in the shadow of humor or melancholy. In fact it finds its diamond in the rough at points by mining its characters’ sorrow for hilarity. In doing so it lends a certain complexity to them. Populated throughout the film are numerous older character actors that inhabit the space of Robert’s world, including a great cameo from Mitchell Wenig (these guys from Uncut Gems). The film feels delighted to populate Robert’s world with these characters too, accentuating the sense of absurdity that feels like it bleeds out of his comics somehow.

The film uses this inherent sense of humor to keep the very real stakes from getting too melodramatic or serious for its own good. Funny Pages is after all a deeply sorrowful film, but its coating of humor makes the sadness in characters more interesting. A moment between him and an old lady in a pharmacy had me in stitches despite how depressing the situation really was. Cinematographer Sean Price Williams shows us tight closeups of faces, in this scene the woman’s sadness, complete with teardrop, fills the screen in comical fashion as she engages in a back-and-forth with Robert to try and convince him to get her Percocets. During the peak of that moment the woman’s voice never breaks. The juxtaposition of hilarity and tragedy is used throughout Kline’s film but is at its simplest form here. No better example exists in Funny Pages than how Kline manages to cover these two warring yet separate human experiences of misery and amusement in his human subjects, almost as if the subjects of those old funnies trapped in the same hell-scape were superimposed onto the film’s human characters in closeups.

Because Robert has decided to make his own life, he finds the odds are stacked against him. Underlying themes of white entitlement emerge, but it’s never quite so simple with Robert. His cluelessness and wide-eyed innocence about nearly everything betrays the image of professionalism Robert is aiming for, even if he remains woefully unaware of his inherent privilege. But Robert is blissfully unaware of the advantages he benefits from while pretending he has thrown himself to rock bottom, heroically working his way up from scratch.

Equally oblivious (if not more so) is his friend Miles, who has also studied with Mr. Katano but to a seemingly more crude effect, especially in Robert’s comparison to his own, self-labelled, “professional” style. As Robert attempts to machinate an endgame to learn from Wallace, he starts to adopt certain traits young burgeoning capitalists from the 19th century would find charming. And the inspiration he finds in the mentor of his choosing, Wallace, comes from his work at the very bottom rung of a comic book label created by those who had the agency to leave places like Marvel to start with a blank slate of stories & characters from the ground up. Funny Pages comes from as much a place of tragedy and comedy as it does irony; its portrait of Robert’s self-styled auteurism backfiring in almost as many ways as his dilapidated new car.

Funny Pages is as complex as its main character, a kid who feels like he would fit comfortably in the margins of Ghost World or American Splendor, but has a strange control over his destiny. He is convinced that the world is his oyster, but not convinced that it will be for very long. Funny Pages is a great exercise in discovering your own style & rhythm that runs with a fun sense of chaos and bite, and now that Owen Kline’s cat is out of the bag everyone is going to want to see what happens in the next issue.

Funny Pages is currently playing in select theaters and is available on VOD platforms courtesy of A24.

Funny Pages is after all a deeply sorrowful film, but its coating of humor makes the sadness in characters more interesting