When Aster, a reclusive high school bee enthusiast, is taken under the wing of a mysterious mentor named Tresa, everything Aster loves is shattered. Snatched away to Tresa’s remote, nightmarish apiary, Aster finds herself captive to Tresa’s grotesque plan–being groomed as a diseased hive’s next queen. Aster must find the strength within to exterminate Tresa and her godforsaken brood to survive.

We caught up with director Sean Riley to talk about the sticky new horror jaunt! 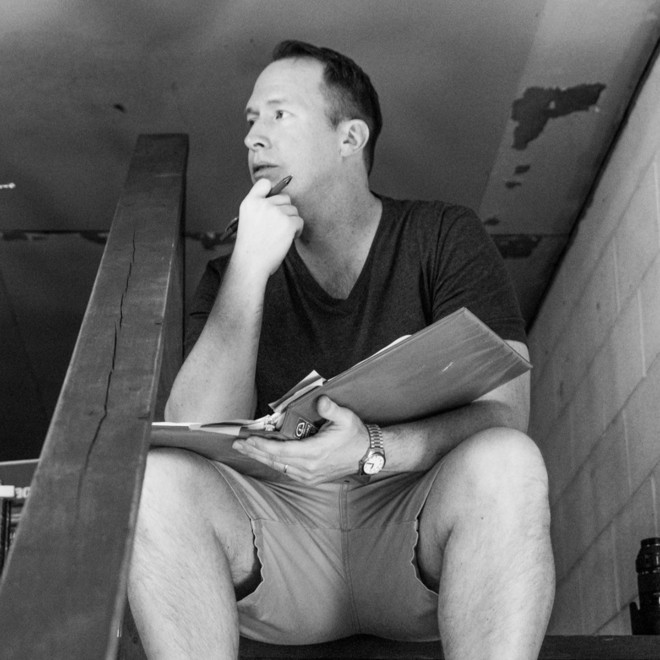 Tell us about your beginnings, sir?

My humble story begins as one of two sons raised by a single mother–the daughter of a Sicilian immigrant–in Baton Rouge, Louisiana, where I graduated high school in 1995. I left home and eventually graduated from the University of Southern Mississippi film school in 2001. Not long after, I married my wife, Candy, and had a son, Kiernan. I spent the next 15 years raising a family, writing, and building a teaching career. Time goes by quickly, and it dawned on me that I hadn’t yet accomplished my life goal of making a feature, so I got super-serious and focused after my 39th birthday. In just these past 4-5 years, I’ve made one short and two feature films.

And when was the first time you picked up a camera?

I guess that depends on what you mean by a camera! One of my earliest memories is of picking up one of those Fisher Price Movie Viewer toy cameras and hand-cranking Disney’s Lonesome Ghosts on it. I was completely awestruck to hold in my hands such motion picture magic. Throughout my teen years, my friends and I would drive around the city and create improvised sketches with a VHS videorecorder. And, of course, when I made it to film school, I began making short 16mm films using Bolexes, Cannon Scoopics, and CP-16s. You really won’t find me picking up a camera in my free time, though. I’m kind of a weirdo in that I prefer not to play around with cameras. To do so, for me, takes away from the magical experience of creating a movie. I want the process of filming to be a rare, special event and never want to lose that feeling.

Was it always horror films, for you?

In the beginning, for sure. Like many kids of the ‘80s, I grew up on a steady diet of slasher movies, fully endorsed and financed by my father. It’s funny because my father was largely absent throughout my life, but he left an indelible mark on it by introducing my young, impressionable mind to so many titles from the Video Nasties canon. Haha. My film tastes evolved into many other genres as the years went on, but horror certainly was part of my wheelhouse from an early age. I never set out to write or film a certain genre of movie, though. I’ve done rom-com, drama, thriller, and horror at this point. It’s really more about whether I’m interested in the story. If it happens to be horror, then so be it.

They do say ‘horror is an easier sell’ though, did you find that with ROYAL JELLY?

Yes and no. Yes in that horror lends itself very well to microbudget filmmaking. My last feature, the rom-com Fighting Belle, was technical-wise a piece of crap. But it had a wonderful script and a really commercial concept. Rom-com audiences have no idea what to do with a microbudget film. They’re only used to seeing rom-coms with seven-figure budgets and name talent behind and/or in front of the camera. Flaws aren’t commonplace. Plus, there are so few marketing outlets out there to get word out except for a few mommy-blog sites–if you’re lucky. In contrast, horror fans not only accept the flaws inherent to microbudget horror films, they embrace them. The films’ flaws become an accepted–even revered in many cases–part of their style and personality. In my opinion, horror fans are among the most tolerant and loyal fans out there. HOWEVER, I’m not the only filmmaker who has figured this out. As a result, the horror market is absolutely inundated with product. To get noticed, you have to be at the absolute top of your game or doing something really unique, which is why I feel so fortunate that Royal Jelly was picked up by a quality distributor like Uncork’d Entertainment. In hindsight, I was probably crazy to even attempt a horror film. Some of the most innovative work in film right now is happening in the horror genre.

Where did the story come? A mix of real-life bee horror stories and the imagination?

I make it a habit of collecting interesting tidbits that I find in news articles and other sources that might make interesting stories. I don’t remember exactly how, but I stumbled upon some factoids about bees while in film school during the late ‘90s. I remember being amazed by bee hierarchy–how females dominated the society and performed what we might think of as the traditional male roles, how vicious to one another they could be, how they were affected by a number of diseases that manifested in really disgusting ways. I spent many years working on and abandoning the story until I finally honed in on the royal jelly-Cinderella aspect of it. That’s when it all finally clicked together.

Are all the scares written into the script or do some happen, organically, on the day?

I think so, yeah, as far as I can recall. Certainly some of the original ideas were improved upon by cast and crew contributions on set.

How important was sound for you?

A-1, numero uno, top priority! Unfortunately, I learned the hard way from my first feature, Fighting Belle, how important sound is after getting eviscerated–just destroyed–by audiences and reviewers over it. What we spent to make that movie was an absolute joke, but I quickly learned that if you have even a dollar to spend on making a movie, that dollar better be allocated for sound. You would think that as a film school graduate, I would know better. I had definitely heard the whole “audiences will forgive most anything except bad sound” before. I just don’t think I was truly aware what passable sound was and how to get it. When the light bulb went on, I was like Oh, my God. How could I have possibly been so unaware? I’m really fortunate to have had Brian Hufnus as sound mixer, Christopher Boler as primary sound recordist, and Joe Hodgin as composer on Royal Jelly.

Do you think the film might’ve been considerably different if shot by Hollywood… in Hollywood?

Yeah. They probably would have removed anything original about the story. Haha.

Surprised there hasn’t been more movies made about killer bees?!

In a way. There’s this weird insect-subgenre out there that has tended to just exploit the most easy, superficial aspects of insects. So even when these films are made, very few of them, such as The Fly or Creepers, for example, have bothered to dig beneath the surface to explore more interesting aspects. Bees are such interesting and important creatures. It’s a wonder why they aren’t the basis of more stories.

If there’s enough audience interest in Royal Jelly, I would love to! I think there’s still so much that can be done with the concept.