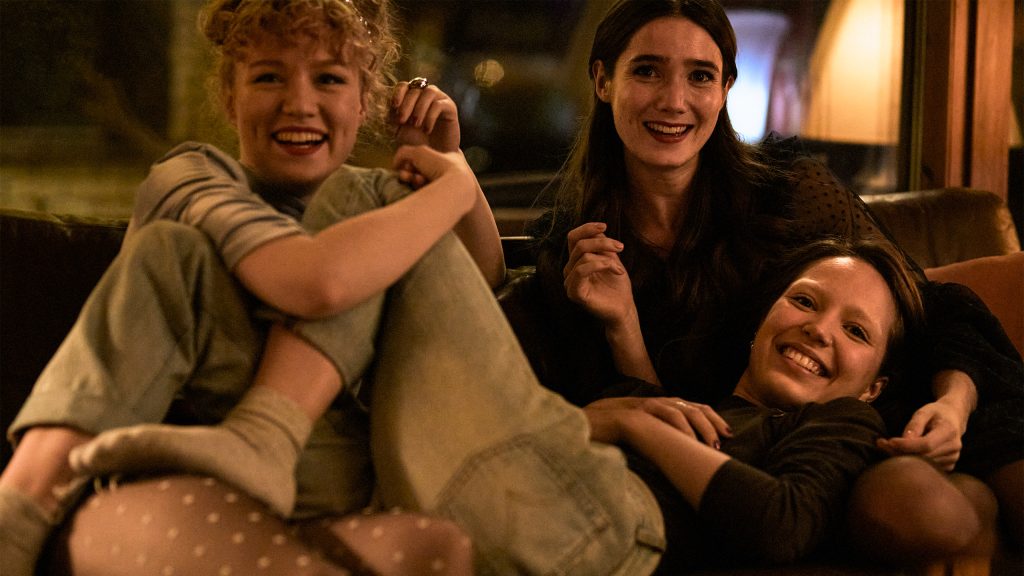 There are some movies you want to live inside of. I don’t mean watching science fiction or fantasy and imagining how cool it would be to whip around in a spaceship or carry a wand. That is its own wonderful corner of movie magic. No, what I’m talking about is what happens when you sit down with a film and cannot help but fall totally in love with its sense of place, mood, and some rather unquantifiable essence of what watching it makes you feel like. You want to wrap yourself up in the sensation it creates and carry on as a part of it long after the credits roll. Girl Picture (2022), directed by Alli Haapasalo from a script penned by Ilona Ahti and Daniela Hakulinen, had me wishing just that. With its deft blend of romantic comedy and coming-of-age drama, I was utterly enchanted by the film.

Over three subsequent Fridays and weekends, Finnish high schoolers Mimmi (Aamu Milinoff), Rönkkö (Eleonoora Kauhanen), and Emma (Linnea Leino) navigate the high-stakes world of trying to define themselves amidst the carnage of their teenage years. Mimmi and Rönkkö are fiercely bonded best friends who also work at a food court smoothie stand together. Emma’s life is defined by her commitment to figure skating: practice three times a day and a major competition only two weeks away. All three grapple with carving out their own identities even as family members, friends, and high school cliques strive to do that work unto them. It’s at a classmate’s birthday party on the first Friday that Mimmi and Rönkkö’s side of the world crashes into Emma’s. While Rönkkö looks for a boy so she can try to work through a current inability to orgasm, Emma and Mimmi start an unlikely romance. From there, Girl Picture uncovers more and more of these three young women and their intertwined pursuits of pleasure and kinship.

Of the many skillful narrative throughlines in Girl Picture, the film’s frankness about the desires each of its three leads harbors is a marvelous standout. In a genre that often consigns female libido to punchlines or gross-out comedy in an attempt to match up with its masculine counterparts, Girl Picture’s utter commitment to allowing awkwardness, humor, and tenderness to intermingle is downright restorative. Much of this comes courtesy of Mimmi and Emma’s budding relationship. Their first fumblings toward each other, and then the passionate embraces of a couple leaning into the discovery of joint pleasure. Alongside them, Rönkkö’s candid reckoning with what she perceives as the personal failing of not finding enjoyment in sexual encounters is rather unlike anything I’ve seen. She searches for different sorts of partners and experiences out of desperation to “fix” herself, and that journey is poignantly rendered.

Mixed into these parallel arcs are a vibrant array of scenes and sequences that foreground the vital bond that Mimmi and Rönkkö share. Some of my favorite moments in the film boil down to conversations the two have at the smoothie stand while they work. Mimmi helps Rönkkö process her crisis, reminding her that she is far more than her confusing sexual appetite. Rönkkö pushes Mimmi to work through her tendency to push others away at the point that they become close enough to mean something. Their friendship is fundamentally one of passionate loyalty, but of course, this also comes with fights and tears and all the messiness of growing up. Ahti and Hakulinen’s script supplies both characters with naturalistic dialogue and situations that radiate empathy. Yes, Girl Picture is intimately about sex and desire, but it is just as concerned with exploring the untidy fervor of friends who care deeply even when their own issues make it challenging to show up in the ways they want to.

Bringing Emma, Mimmi, and Rönkkö to life are a trio of astounding actresses who miss not a single beat in the film’s runtime. Each is presented with a young woman facing down a tortuously personal crisis while simultaneously vibrating with wanting. Kauhanen molds Rönkkö into an awkward yet endlessly lovable oddball who just wants to find joy. Leino melds the archetypal figure of the teenage athlete pushed to an extreme with the vision of a girl whose heart is positively erupting with a love she yearns to give. Milinoff centers Mimmi in the pain of feeling replaced by her young stepbrother, nonetheless striving to focus on the joys of her friendship with Rönkkö and growing love with Emma. It is impossible to isolate one performance as the standout simply because each builds so gracefully off the other. The three actresses are therefore the platonic ideal of a leading ensemble: each remarkable on their own, and truly indelible together.

Girl Picture unfolds with such grace and naturalism that I can only applaud Haapasalo’s euphoric direction—it is unpretentious filmmaking in the best possible way. Haapasalo, again and again, identifies the composition most disposed to highlight her actresses and develop the film’s emotional core without slipping into flashiness that would undercut Girl Picture’s stunning authenticity. However, this is not to say that Haapasalo never slips in a jaw-dropping moment of cinematic artistry. Quite the opposite. Each scene and sequence is so skillfully composed so that you are enraptured by it that Haapasalo can deliver a breathtaking image with seemingly the flick of a wrist. Of all of them, it is the first time Mimmi and Emma go off together that will linger with me. They drive off from the party and park by the water where Mimmi asks Emma to “show her” what a skating routine looks like. In the winter air, under a symphony of shadows and red light, Emma dances through her routine while Mimmi watches and falls in love with her right there and then. It is, plainly, magical.

It is no wonder why Girl Picture won the Audience Award in the World Cinema Drama category at Sundance this year. The film is the wondrous concoction that is the mingling of true and proper cinematic artistry with an undeniably heartwarming story. Girl Picture is movie magic of the highest order, and is not to be missed.

Girl Picture had its World Premiere in the World Dramatic Competition section of Sundance Film Festival 2022.