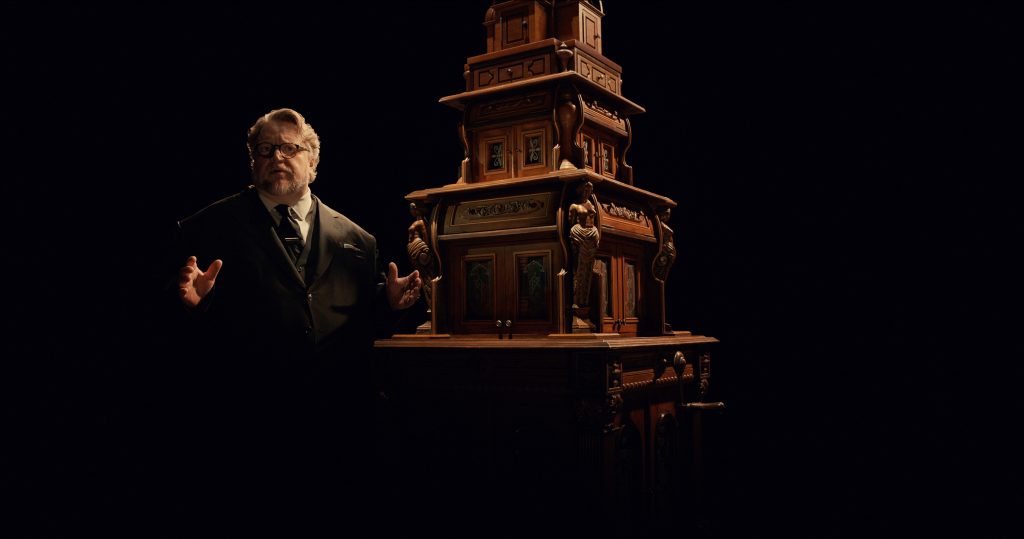 It’s been a while since genre fans have had a truly stellar anthology series. Jordan Peele tried reviving The Twilight Zone to little fanfare, and the quality of American Horror Story has dipped greatly in recent years. The market seemed ripe for a truly stellar and provocative horror anthology series. Thankfully, the Oscar winning genre maestro, Guillermo del Toro, has stepped up and promised fans of the dark and macabre something truly special, and he made good on that promise.

Guillermo del Toro, the auteur himself, enters a black void with only the titular cabinet inside. The viewer is left to wonder what devilish delights await them in each compartment. It was exciting to see del Toro carrying on a tradition that harkens back to Rod Serling introducing The Twilight Zone or Alfred Hitchcock introducing his show, Alfred Hitchcock Presents. This is such a great way to open each installment. It sets a perfect tone that is scary yet a little playful and utterly awe-inspiring.

The first episode is directed by Guillermo Navarro. Navarro has been working with shaping the look of del Toro’s work, acting as cinematographer on Cronos, Pan’s Labyrinth, Hellboy, The Devil’s Backbone and more. In the very first moments of the episode, we are flung right into September of 1990 with a man in a dirty apartment whilst George H. W. Bush’s “New World Order” speech regarding the Gulf crisis plays in the background. We are then quickly introduced to Nick (Tim Blake Nelson), a vet that we learn is deeply racist and in debt to some shady people. Nick makes his money buying and selling items from storage lockers. However, after he buys the titular lot 36, all hell literally breaks loose. With its spooky tone mixed with wartime texture, twisted creatures, and delicious comeuppance, Navarro’s entry feels like an EC comic come to life.

What I love about this episode is the mystery that builds and with it so does the dread. Everything from eerie foreshadowing, masterful atmospheric lighting, and slightly over-the-top performances all work to make this a very solid start. The writing was fairly clever in both its text and metatext. Debts, both in terms of monetary and personal, are an interesting theme that ties nicely into plot and the character of Nick. He feels like the system is rigged, and he his owned something more for his service. He also literally is in debt to some bad people. Unfortunately, the episode suffers from being under 50 minutes in runtime. There are aspects that are setup that aren’t fully explained. This concept should have been fleshed out into an entire film to really do justice to the interesting worldbuilding it crafts. Still, that finale is oh-so-satisfying. Not to mention Tim Blake Nelson gives one hell of a great performance.

Considered by many to be the crown jewel in this series, “Graveyard Rats” is truly the stuff of gnashing and clawing nightmares. Set in 1919, the story involves a man named Masson (David Hewlett), an extremely well spoken man that makes his living robbing graves. However, when bodies seem to go missing out of their coffins, he discovers giant rats are to blame. In order to pay his debt, he must go down in the caverns underground to find any buried treasure.

The episode is a wonderful Gothic period piece that may not have been written by Edgar Allan Poe, but it certainly evokes it. Its themes of claustrophobia, possible live burials, and madness were all things the mustachioed mystery and horror writer was quite familiar with. Not only that, but there is a certain literary quality to Masson which further highlights this comparison. Unlike “Lot 36.”, “Graveyard Rats” is a lean and tense episode that uses its simplicity to its advantage. In a runtime less than 40 minutes, there is a fully fleshed out story with a weirdly engaging character in Masson, and, of course, some pants-shitting scares once our anti-hero faces off into the depths of the earth to battle a horde of rats. Yet, without spoiling anything, there is something much worse lurking in the bowels of the vermin infested netherworld. Director Vincent Natali delivers one hell of a creepy old school horror experience. Also, it’s well worth noting the amazing special effects and CGI work and the truly stunning cinematography. This is the only episode that offers a black-and-white version under “Trailers and More,” which is highly recommended.

This is the first science fiction episode in the series so far and is directed by David Prior. It tells the story of a Dr. Carl Winters (F. Murray Abraham) who is tasked with preforming an autopsy for a company’s insurance claim. During the course of this event, things go from odd to downright chilling when he learns an alien parasite is thriving inside the corpse. What ensues is a battle of wills as the truth is discovered. Prior’s outing is truly a gem in this series and one that sneaks up on you. Much like the best high-brow science fiction, this episode takes the concept of alien invasion and elevates it as a way to talk about deeper existential topics.

“The Autopsy” starts out as an engaging and tense mystery that opens up into a strange and thought-provoking game of chess. The final half an hour is some of the most harrowing and horrific television you will find–not so much in the graphic sense even though there is an autopsy taking place. It’s the dread-filled implications of what could happen all by the machinations of an alien parasite that is pure-terror without shedding a drop of blood. Aiding this is fantastic practical effects and a heavy dose of haunting atmosphere which really sell this story. The cinematography is seriously top-notch with Anastas N. Michos dripping everything in a grim, yet starkly beautiful lens. This is all capped off with Christopher Young’s brilliant and chilling score. Be sure to pay close attention to this episode. A second viewing might be required to pick up on everything. The reward for engaging with it is a staggeringly fascinating take on the Body Snatchers trope.

Episode Four: The Outside

Ana Lily Amirpour (A Girl Walks Home Alone at Night) directs “The Outside,” which to this point is the most overtly humorous while also remaining the most sobering and unnerving. Stacey (Kate Micucci) is a very mousy bank clerk who badly wants to fit in with her other female co-workers. During a Christmas party, she is gifted some very expensive cream which almost instantly makes her break out in a red rash. Desperate, Stacey uses the entire bottle on her skin, causing extreme reactions to her skin. Despite this fact, she buys an entire crate of lotion to transform her with horrific results.

In the rich tradition of the very best anthology series, “The Outside” is an episode that taps into something that is relatable, sometimes painfully so. While, no, most people never go to Stacey’s lengths to fit in, we have all felt like outsiders to various degrees. You need an actor to really drive this home. Thankfully, Kate Micucci gives a heartbreaking and compelling performance. You are truly on her side even when things get pretty intense. The episode really taps into that late ‘90s look and feel (though it never is specific with its time setting). There is a heightened, over sexualized nature to every conversation happening amongst the various female characters. Not only does this help drive home the excess of the decade but also an interesting commentary and satire on the ‘90s feminism backlash.

The overall concept and execution here is fantastic, and it gives audiences something more than surface level lip service. As mentioned above, Micucci is a driving force in making this episode shine. She embodies this character perfectly. In a less flashy but important role is Martin Starr who plays Keith. Like Micucci, Starr gives a lot of pathos to what could have been a very one-note character. While this episode is very enjoyable overall, it does have some issues. Mainly, things do get a bit repetitive building up to the finale. Possibly either a trim or another plot thread could have helped here. Ana Lily Amirpour’s episode is a surreal and blistering indictment on seeking perfection and the deadly trap that it is.

Guillermo del Toro’s Cabinet of Curiosities is currently available to stream on Netflix.