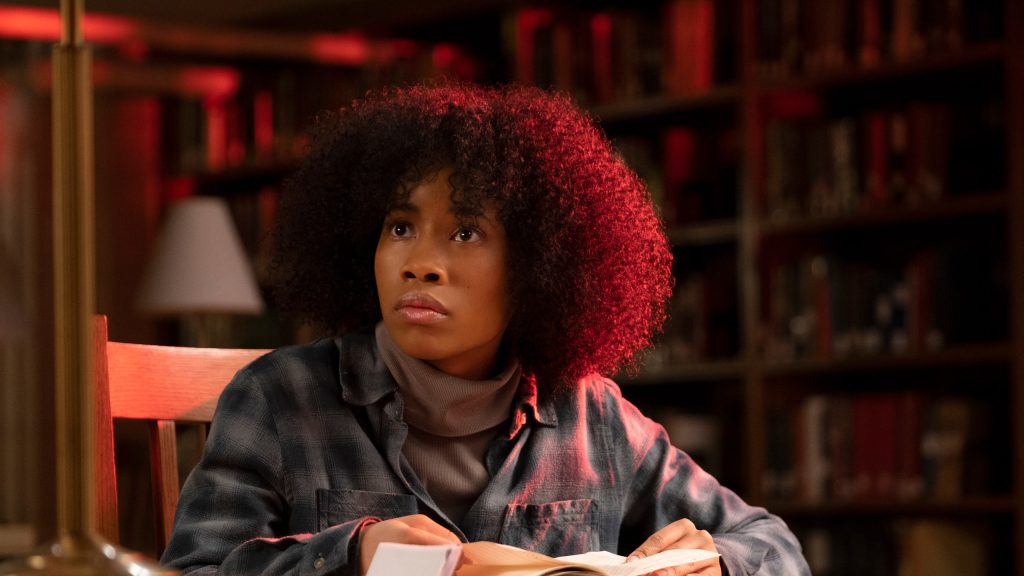 Zoe Renee co-stars with Regina Hall in Mariama Diallo’s upcoming horror film Master, which premieres in theaters and on Amazon Prime on March 18th. Renee plays Jasmin Moore, a first-year college student a the predominantly white Ancaster College. Over the course of her first days, weeks, and months at college, the joint horrors of the college’s long-gestating systemic racism and folk tales about a witch who kills first-years weigh on Moore. I hopped on a Zoom call with Renee as she was promoting the film’s showing at SXSW 2022. The following is our conversation, edited lightly for length and clarity.

Devin: Can talk to me a little bit about how you ended up playing Jasmine?

Zoe: My agent sent me the Master script and said it was a thriller. I’d never been in a thriller or anything psychological like that before so I was intrigued. I was a little scared. It took me a second to read Master in full because I was terrified. I kept you know, opening it up at night and I’d have to close it because I’d be like, “I cannot finish this.” I had to finish it in the daytime. But, after I finished it, I was absolutely hooked. It’s a little weird for me because I am scared of pretty much everything. So I was so surprised by my want and my need to kind of jump into something like that. But I did. And it was amazing. So exciting.

Devin: So it sounds like you wouldn’t count yourself as a horror fan?

Zoe: I think now I am. [laughter] But before this, absolutely not.

Devin: Did that make it hard for you to feel like you could get into the headspace necessary for like this? Or did it come naturally?

Zoe: That’s a really great question.  I think there was a bit of hesitation on my part because what I’m used to is drama and a sprinkle of comedy. In those roles, there are certain emotions you don’t always hit on that are more present in horror.  So when my character, Jasmine, had to emote and just sit in this, feelings of fear and genuine terror, it was a little outside of my comfort zone. These reactions to something that literally could kill you were different for me. I watched a ton of movies in advance to help prepare, ones where I could really watch performers. I watched how people translated fear. I think that that was so helpful for me because I hadn’t come in contact with fear like that before. I give Mariama, a lot of credit for allowing us to dive into the film like that.

Devin: I wanna stick with that train of thought about translating fear. Something I noticed in your performance is your physicality. On top of the more kinetic aspects such as running and fighting, you seem to have a great sense of either filling or shrinking from space. Is that something that you took on as part of representing fear?

Zoe: Yeah! It was a part of this world we created onset. When the cameras were rolling I just instinctively felt small. Even if it was just placement, you know. My friends felt taller than me As we move through the story, everything about who Jasmine was felt smaller and more vulnerable. I don’t know if Jasmine was used to that in her life before college. There’s that internal emotional angle, but I also do think we physically see that Jasmine kind of shrinking. Trying to, you know, expand, and then shrinking again after another situation batters her. All of that is to say it was on my mind, but do think it was more instinctive than it was prepped or prepared.

Devin: Gotcha. Well while I have you talking about acting, I have to turn to this incredible ensemble you were a part of. A real mix of new faces and old hands for the genre. What was the community like on set in the ensemble as you were making such an intense film?

Zoe: It was really good. You know, from our first day, we really were just excited to start. Mariama gave us a couple of weeks of just straight prep. We watched a ton of films. We had a ton of zoom meetings. We were just in constant communication with each other, which was really nice because I hadn’t met these people before. I was dipping my toe into a genre that I’d never touched, but it gave me so much confidence walking in that first day on set because we had already really fleshed out eh scenes. I think it made things move a little faster as well and led to a really great overall chemistry. It just went really well. I mean, I will say that working with Regina, I think it’s hard to have a bad time or struggle at all because she’s just such a joy to be around.

Devin: That’s so wonderful to hear! Now I know we’re wrapping up so I have one last question. You’re coming off a rapturous Sundance experience and going into SXSW which is the last stop before Master premieres for a wide audience. As more people see the film, what do you hope audiences can take from it?

Zoe: I think the biggest thing that I want is for conversations to happen. I want people to watch it and get their friends to watch it so they can talk about what goes on in the movie. I just want lengthy conversations to happen, and I want people to think about experiences in their lives where they felt like Jasmine, or they felt like [Hall’s character] Gail. I think if that happens, I’ll feel even more on top of the world than I already do.