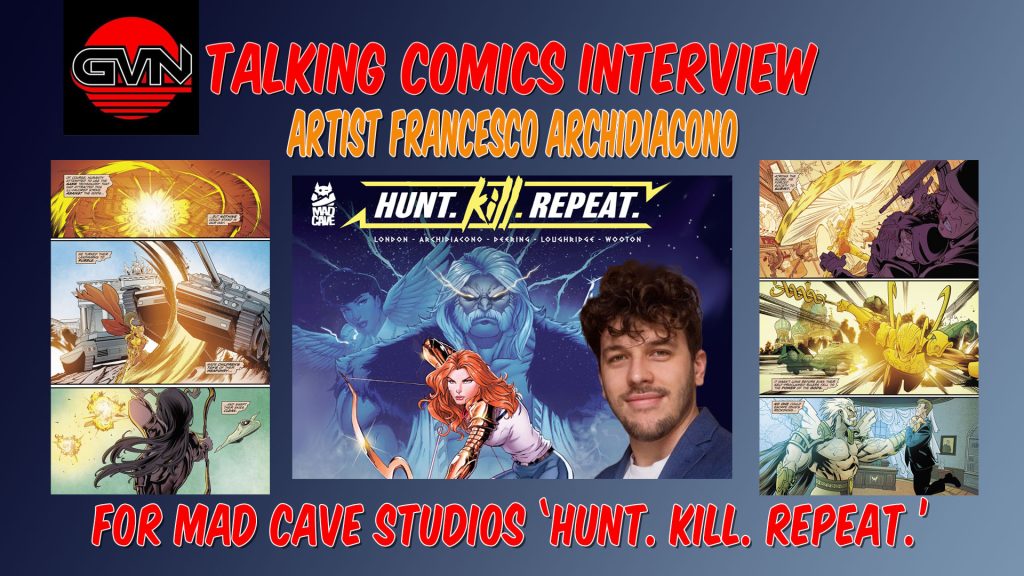 When I was given the opportunity to preview Mad Cave’s upcoming title “Hunt. Kill. Repeat.” the first thing that caught my eye (besides the Greek Gods and Goddesses) was the detailed artwork involved. Imagine my surprise when I learned that the talent behind this was a relative newcomer to the comic art world. Well, you certainly couldn’t tell it by the pages he produced. In conjunction with the inking of Marc Deering and colorwork of Lee Loughridge, the action leaps off the page. Because of this, when the opportunity to spend a few minutes with this up-and-coming artist came about, I jumped at the chance. So, let’s welcome Italy’s own, the talented Francesco Archidiacono to GVN’s Talking Comics.

GVN: Thank you for your time, Francesco. Since this is my first opportunity to talk to you, let’s start out with a bit of artistic background. When did you first take an interest in comic book art and whose work inspired you to pursue that passion?

FA: I’ve been reading comics and drawing monsters since I was a child, but I never really considered art as a possible career until the last year of High School, when my mother gifted me a 3-months course at the International School of comics in Rome. Those 3 months made me realize how much I love drawing, that it is possible to make a living out of it and that studying the art of comics is incredibly cool! I have a lot of artists whose works inspired me, but the first one that always comes to mind is Stuart Immonen. When I got into studying comics at the end of High School his ALL-new X-men run was being published and it had a huge impact on how I draw and on my storytelling.

GVN: I mentioned this during my discussion with Marc, but it’s worth saying again.  The artwork you, Marc and colorist Lee Loughridge have put on display for issue 1 of Hunt. Kill. Repeat is really top-level. How did you get involved in this project and did it require a huge pitch by Mad Cave to get you onboard?

FA: The whole process was really streamlined. I just sent an email to MadCave with my portfolio, asking them if they were interested in working together and editor Chris Sanchez answered me almost immediately, saying that there was a series I would have been perfect for. After that we arranged a videocall with Mark to speak about the project. I’m a huge fan of Greek and Roman mythology, so it shouldn’t be a surprise that I was extremely enthusiastic at the idea of working on a superhero genre comic featuring the Greek deities. Here in Italy, you get to study Greek and Roman literature and language in high school and that let me add a couple of Easter eggs for the big Greek mythology nerds out there.

GVN: When it came to starting the project and your collaboration with Mark, did he send you a full script that you worked from or was it more of a collaborative effort with some communication involved as you did your panels?

FA: I mainly worked on full scripts throughout the whole series, with Mark providing some of the references he used to visualize the different scenes. The thing Mark made clear from the beginning is that he trusted my creative process, meaning that, despite the scripts being really detailed, I still had the freedom to tweak a sequence.

GVN: From what I have seen in the first issue, that trust was well placed. This was a question I also posed to Marc. I have talked to many artists and writers about their processes in creation and how they work together, but I hadn’t spoken about the dynamic between pencillers and inkers. Since you were new to Marc (and he to you) how did you decide how to approach your work with him on Hunt. Kill. Repeat?

FA: Working with Marc was my first experience with a professional inker, so it wasn’t easy for me at first. Having always worked on my own, I had to learn from scratch how to draw clear pencils for someone else. Luckily for me, Marc is not only an extremely kind and patient person: he is also a skilled and experienced professional and he was easily able to compensate for me. I learned a lot working with him and I think it shows in the crescent quality of the work throughout each issue of HKR.

GVN: I would have to agree with that. Thanks once again for giving us a few minutes, Francesco. I want to give you this opportunity to promote any other projects (If you can), and where can fans follow you both on social media and the web?

FA: Well people can find me on Instagram as Francesco_Archidiacono on Twitter as @theArchibaffo. As for other projects, I’m in the executive board of MeFu, the italian association of comic book creators. We are currently working to make the EU pass legislation to regulate AI companies, just like the wonderful people of the Concept Artists Association are doing for the US. We have launched a GoFundMe campaign to help us pay our expense so, if you are interested in the debate on AI art, go check it out! https://gofund.me/53486d2f

If I Only was a God

GVN: Finally, I leave you with the same whimsical question I posed to Marc. The story of Hunt. Kill. Repeat. deals with the Greek Gods and Goddesses. Each one has their unique personality and powers and shall we say…. quirks. If you had the choice, which God (or Goddess) would you choose to be? If only for the short term.

FA: Uh to answer this question I must pay attention to spoilers! While the gods of the main Zeus family are really cool characters, I don’t feel like I would enjoy living under Zeus’ watch. In issue 3 we are going to meet a certain god living his best life in his realm, doing what he pleases and having fun. He’s definitely my choice (and he was so fun to draw him!).

GVN: Great teaser for the 3rd issue. I am curious now who you are referring to. I guess I will find out when issue 3 drops. Mad Cave Studios Hunt. Kill. Repeat. Issue 1 hits the stands on March 1. Be sure to check out our interviews with some of the other members of the Hunt. Kill. Repeat. team, Mark London and Marc Deering.