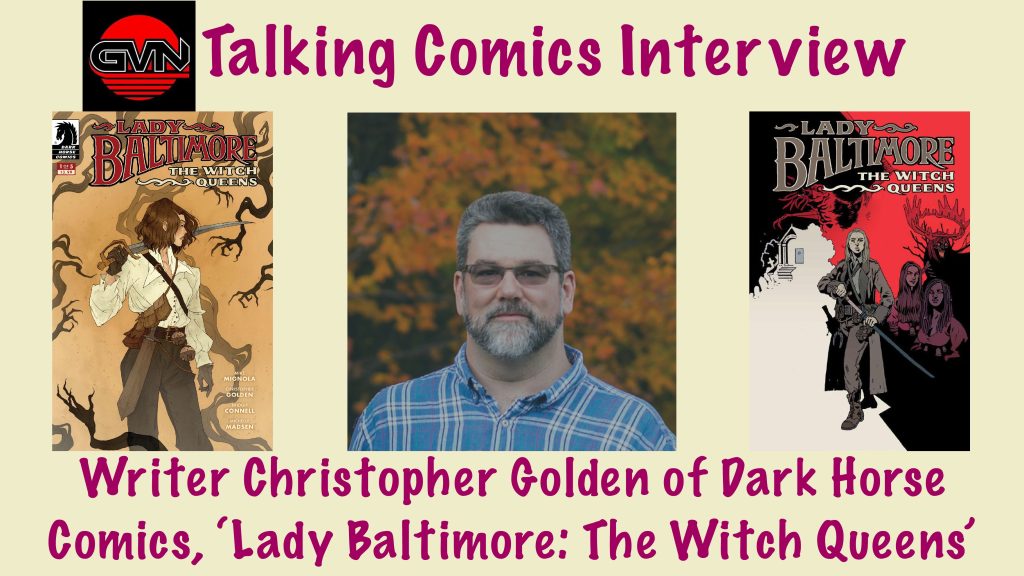 When it comes to writing, Christopher Golden is quite accomplished. He is an award-winning, bestselling author of such novels as The Myth Hunters, Wildwood Road, The Boys Are Back in Town, The Ferryman, Strangewood, and Of Saints and Shadows. In addition, he has teamed with iconic artist and writer Mike Mignola on various books, including Baltimore, or the Steadfast Tin Soldier and the Vampire. Recently, he has seen another one of his collaborations with Mike and artist Bridgit Connell, Lady Baltimore: The Witch Queens come to fruition for Dark Horse Comics. This was delayed for a whole year due to the Pandemic but is now ready to be released. So let’s welcome writer Christopher Golden to GVN’s Talking Comics Interview.

CG: Thanks for the interest! 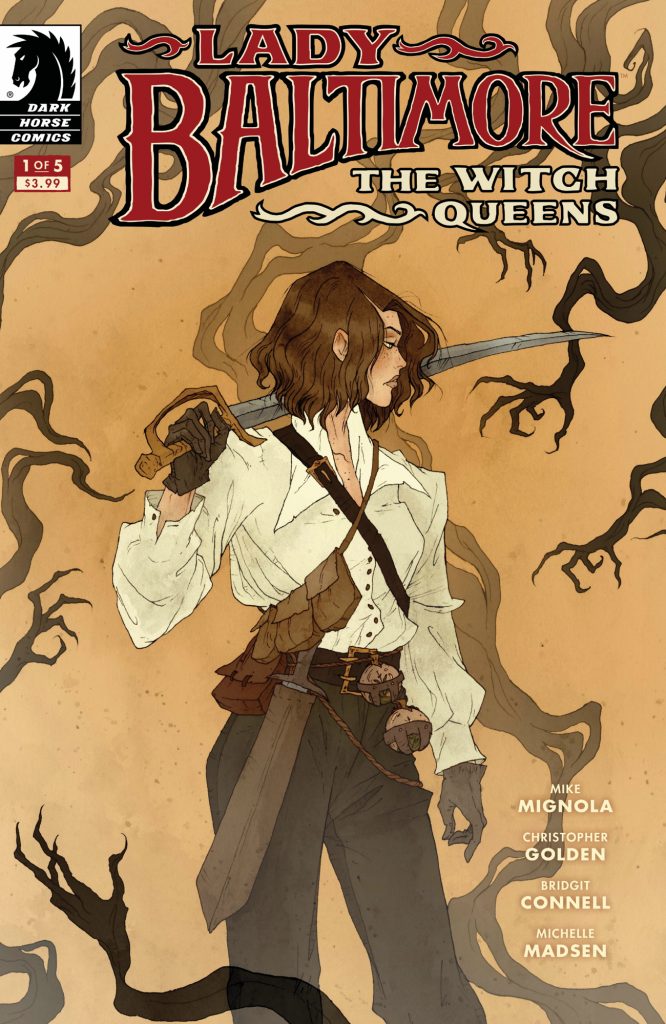 The Coming of Lady Baltimore

GVN: You had worked with Mike Mignola on many different projects in the past, including of course, Baltimore, or the Steadfast Tin Soldier and the Vampire. Was the Lady Baltimore saga in your plans during your work on the Baltimore project or did it come about after the reactions to It?

CG: Neither, really. While we were working on the original Baltimore novel and then the screenplay—the first time we were exploring a film version—we talked a lot about a potential sequel novels.  As well as comics and graphic novels that would explore the years we didn’t cover in the novel. That evolved over time into the Baltimore comics series. Sofia Valk doesn’t enter the story until the miniseries “The Witch of Harju,” but even then, we had no idea what she would eventually become.

She was meant to be part of Baltimore’s team, an untrained but fierce fighter. A woman who becomes dedicated to the fight of good versus evil, light against the darkness. Over the course of the ensuing stories, she becomes Baltimore’s closest confidante. The one person who is able to get him to show glimmers of the humanity he generally believes he has left behind. That all happened very naturally. We had no great purpose with her character then, but we started to see her potential. 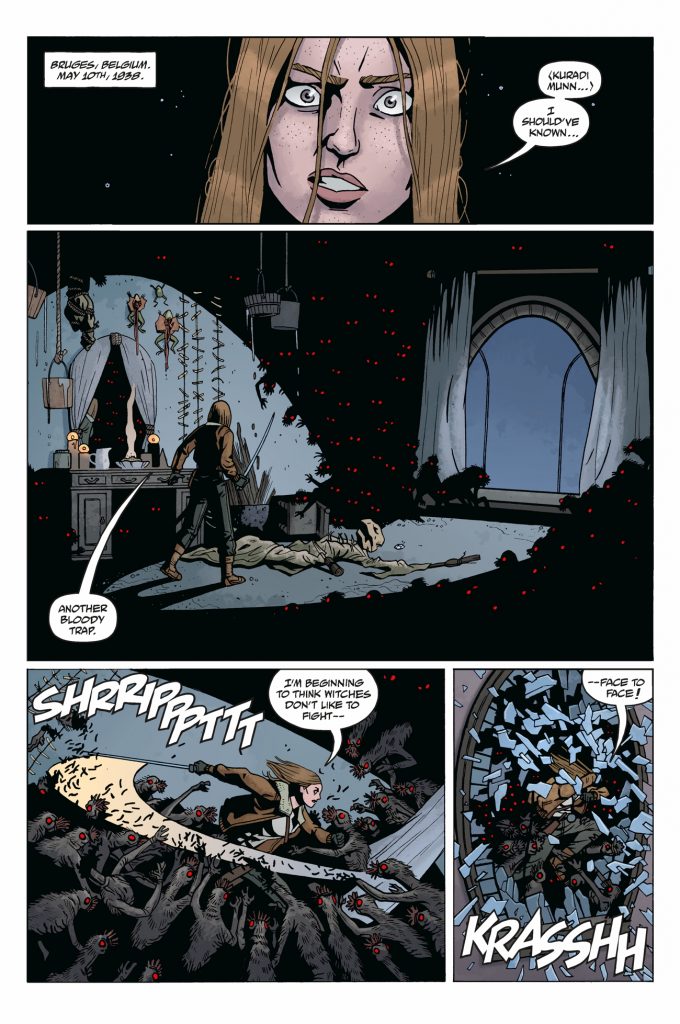 She was the most rational one among them. The one who could see the big picture. The only one who saw each of those men for what they were. Sofia and Baltimore developed a platonic intimacy and trust so deep that in the end, when he knew he would die, he married her. Mainly so that she would inherit his estate and become Lady Baltimore. Thus giving her the resources that would help her pursue her life. I think he hoped it would be a beautiful life. Unfortunately, the darkness didn’t completely disappear from the world. So Sofia has used her new title and privilege and resources to continue fighting against the darkness. This includes the rising tide of Nazism in Europe. Characters can really surprise you if you let them lead the way, and Sofia is the absolutely perfect example of that for us.

GVN: As you were considering your story, were there any elements that you felt you had to include? Whether because it was just something new you wanted to explore or because it tied into Baltimore?

CG: There are so many things that demanded our attention when we were creating this story. By the time we get to issue #1, Sofia has her own team of fighters who are willing to put their lives on the line to combat evil in the world. One of them is Imogen of the Wyrding Way. The moment Imogen sprang into my head, I knew she and Sofia were perfect for one another. The perfect team, and maybe the perfect romantic pairing as well.

I’ve been writing LGBTQ+ protagonists in my work since my first novel, Of Saints and Shadows, which I started in 1988 or ’89, and which came out in 1994. In creating Imogen, and seeing the potential there, I realized that Sofia had been growing toward this story from the beginning. If you look at her relationships with Baltimore and with Harish, it was there all along, and that made me really happy. 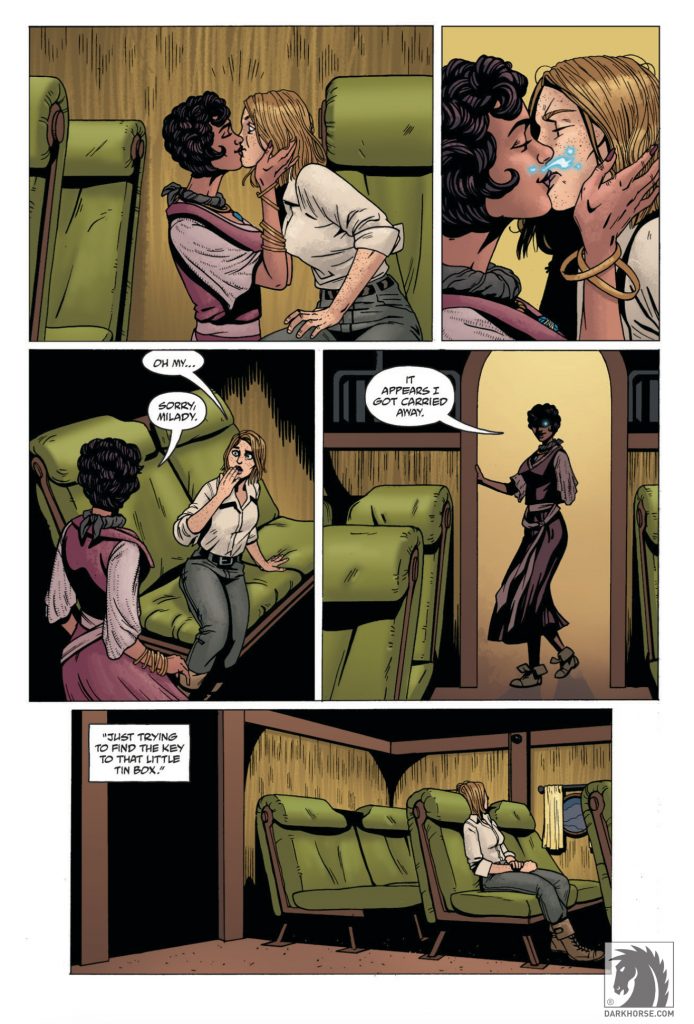 The Great Ladies of Lady Baltimore

GVN: Lady Baltimore joins the great pantheon of strong female characters. As you developed her, did you base her on anyone specifically and did you have a concept of the character in mind?

CG: I love her so much and understand her so much better now. She’s inspired by Baltimore, but this is her fight as much as it ever was his. The difference is that he became a supernatural character in his own life, a champion chosen by the powers that be in the cosmos, and Sofia chose this herself. She’s an ordinary woman, no special blessing. She’s short and petite and underestimated, but she is fierce and fearsome and strong and will use her enemies’ assumptions against them.

Imogen is a witch, but Sofia is just Sofia. A fragile human being who will go into battle against any asshole without flinching.  Because what’s the point of living if you see the evil in the world and turn your back? With Baltimore, she became the glue that held that team together, and now she’s carrying on. She adored and understood him and she carries his sword and sometimes wears his coat. This is her legacy now, her title. When it started, she was joining his fight, but for her it really began with an abusive husband who came back from the dead to torment her further, and so this fight has always been hers, too.

GVN: Man, you explain these things so eloquently, you should be a writer.😏 You worked with talented artist Bridgit Connell on this project. What was that collaboration like and did Mike have any input as far as the comics look or did you just let Bridgit do her stuff?

CG: Bridgit is perfect for this book. Choosing her was the product of a long process—of course she had no idea we were talking about her at the time. Katii O’Brien and Mike and I had a list that we narrowed down to Bridgit, who was exactly the sort of artist we wanted. She has so many tools she brings to bear, such a broad skill set. In an earlier era, I didn’t have a lot of direct contact with the artists I worked with, but that’s changed a lot and I love it.

Bridgit and I were in touch immediately after Katii hired her, and the process has been really constructive and smooth. Mike and I see her designs and her pages. She’s gotten great feedback on monster designs from Mike, and other input of course, and she and I talk or video chat fairly frequently. I’ll get sketches in texts or Messenger with great questions like “What if we did XXX?” “Suppose this character had this weapon?” “What are you doing with this guy later on…can he have some kind of sinister secret?” The whole team gives Bridgit feedback on her pages as they come in, but 99% of the reactions are just cheering her on. Her enthusiasm for the book makes it ten times more fun to work on. 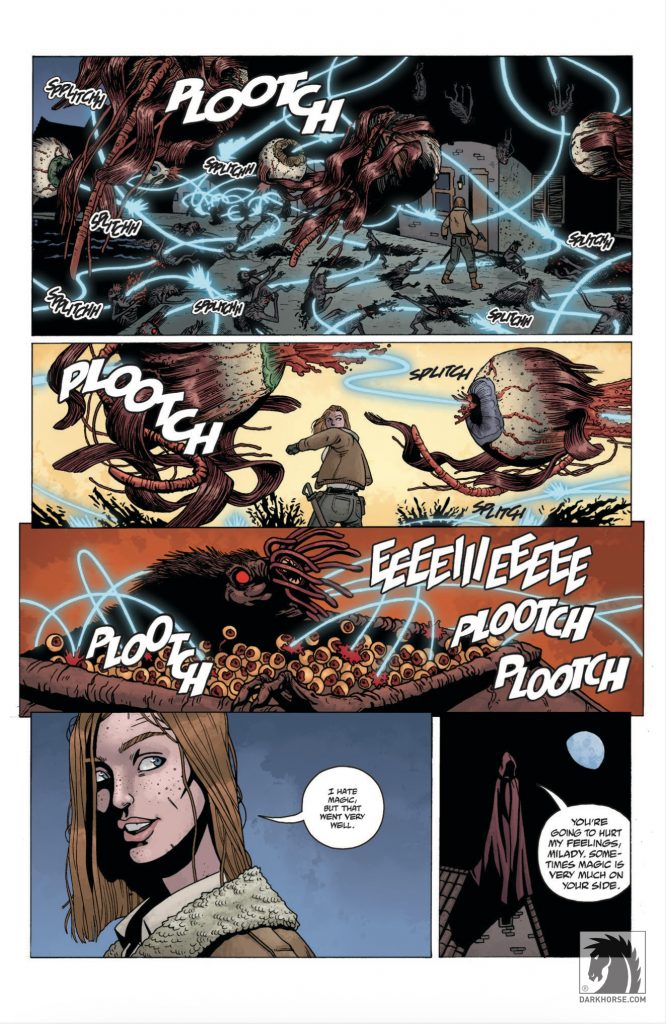 Learning Patience During the Pandemic

GVN: It has been a year since Lady Baltimore’s original release was planned. Did you wonder during the pandemic if this day would ever get here and have you learned anything about yourself during this time?

CG: I’ve learned I’m super impatient. No, actually, I’ve always known that. My wife will roll her eyes if you ask her. The pandemic has been so hard on so many, but I think everyone has weathered it differently. Creative people seemed to deal with initial lockdown better than most because so many of us are accustomed to being at home. But of course it’s gone on so long now and so many have lost so much that I just want to be free. There are so many things coming up that we’ll be able to celebrate. Spring is here, many of my friends are scheduling their vaccinations, it won’t be long before we can be together again…and after an additional year’s waiting, Lady Baltimore #1 is finally hitting comics shops!

GVN: Amen to all of that. Thank you so much for spending some time with us, Christopher. In closing, do you have any new projects you would like to share with our followers, if possible?

CG: My most recent novel, Red Hands, came out a couple of months ago from St. Martin’s Press. I certainly encourage everyone to read it. Beyond that, there are tons of announcements from Mike and me coming in the not-too-distant future, and I can’t wait. For now, though…pick up your copy of Lady Baltimore #1 and tell your friends to do the same!

GVN: Thanks again and we will be following the release of Lady Baltimore with great interest.

CG: Thank you so much!

You can find Issue#1 of Dark Horse Comics Lady Baltimore: The Witch Queens where all great comics are sold.