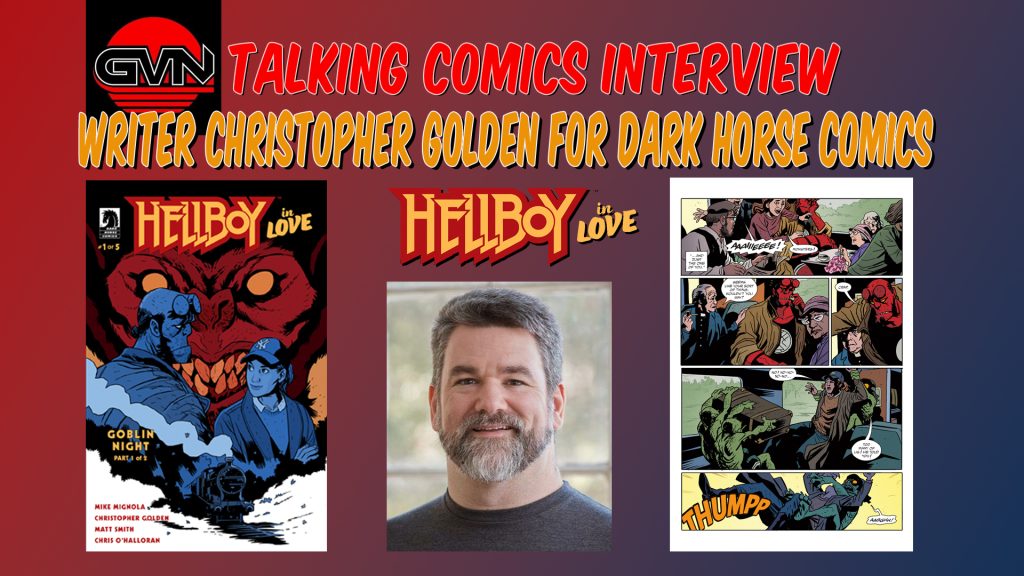 We have had the good fortune on two other occasions of speaking to talented writer Christopher Golden. It comes as no surprise that both times were about projects in the Mignolaverse. The first being his collaboration with artist Bridgit Connell on Lady Baltimore and the second for his work with Mike Mignola and artist Matt Smith on Hellboy: The Bones of Giants. I sense a pattern here.

With that in mind, it is appropriate that we once again sat down with Christopher for a project that he and Mike had percolated about for some time. A revisit with whom Mignola himself considered the “first love” of Hellboy’s life: Dr. Anastasia Bransfield. Last seen in Christopher’s book Hellboy: The Lost Army, his new book Hellboy in Love gives Anastasia an opportunity to share a whirlwind adventure with Mignola’s stoic hero. This new Dark Horse series, which dropped its first issue on October 12th, teams Golden once again with artist Matt Smith.

So, it is our pleasure once again to welcome talented writer Christopher Golden to GVN’s Talking Comics.

GVN: It’s always nice to have an opportunity to sit down with you Christopher. We last spoke for about your work with Matt Smith and Mike on the adaptation of Hellboy: The Bones of Giants. So, it’s not surprising that we are talking about the Mignolaverse once again.

CG: Well, once we had Matt Smith on our team, we wanted to keep him busy and entertained so he’d stick around.

GVN: Well, it obviously worked. Good for you, and even better for the fans. But before we hit Hellboy in Love, I wanted to mention Jim Demonakos and Kevin Konrad Hanna’s Mike Mignola Drawing Monsters documentary, which you appeared in. How did you get involved in that project? As a follow up, was there more you wanted or could have said about Mike that wasn’t included and have you seen the finished product? I have and I enjoyed it a lot. I kind of cheated there…three questions in one.

CG: I haven’t seen it yet, I’m afraid, and honestly, I barely remember talking to Jim and Kevin. I’m fairly sure it was at a convention, and we stole a few minutes in the midst of that. I could spend hours talking about my long history with Mike, my admiration for him, and my gratitude for the opportunities that I’ve had because of our friendship and our working relationship. Some of that would make him uncomfortable—because that kind of open sentiment often makes him uncomfortable—but I’d also talk about his innate grumpiness, and that would irritate him, which is always fun. (Kids, don’t try this at home.)

There is simply no comparable creation to what people have come to call the Mignolaverse. Many creators have contributed to it over the years, but it all springs from the mythic imagination of one person. It all exists inside his head. Nearly every time you talk to Mike, some of the untold stories spill out, like letting off steam that’s built up under the pressure of his imagination. So much of it is wild and unique and when he tells me the weirdest stuff, I just say “yeah, of course,” because these stories wouldn’t come out of anyone else. But from Mike, “yeah, of course” is the only reasonable reply.

GVN: So, once again you worked with the dynamic duo of Mike Mignola and Matt Smith for a follow-up to your novel Hellboy: The Lost Army. To be more specific, you brought Hellboy’s ex-girlfriend Dr. Anastasia Bransfield back to explore that relationship. Was this always something that you and Mike wanted to revisit and when did you finally decide to pull the trigger?

CG: We’ve talked about it many times over the years. It was always Mike’s intention that I write these stories someday. There were a few times we almost did it, and then it didn’t happen. But Mike came to Boston for FanExpo in 2019 and that gave us (me, Mike, and Thomas Sniegoski) lots of time to talk about future publishing plans, both for the Mignolaverse and for what would come to be known as the Outerverse. Both “Young Hellboy” and “Hellboy in Love” came from that conversation.

One of the things Tom and I felt strongly about was giving readers the opportunity to have fun with Hellboy again. Which isn’t to say that the stories from the ’50s and ’60s aren’t fun, only that they can often be kind of grim, and certainly the end of the world in B.P.R.D. was as dark as it gets. We wanted to inject a bit of lightness into the stories. Craig Rousseau and Matt Smith were at FanExpo as well. Matt had already asked Mike about “Hellboy: The Bones of Giants,” so by the time we wrapped up on Sunday, we had plans for several things that continue to unfold in the stories we’re telling now. “Frankenstein: New World” came later but wouldn’t have happened if this flurry of new work hadn’t been in the planning.

GVN: The idea brainstorming during that time must have been something to see. Oh, to be a fly on the wall during THOSE conversations. But I digress…as usual. As far as that relationship (Anastasia and Hellboy) went, did Mike have any constraints he put forth for you when it came to Anastasia and Hellboy or did he leave you to your creative devices?

CG: We used to say Anastasia was Hellboy’s first girlfriend, and that’s mostly true, if you don’t count the demonic wife he married one drunken night in Mexico. Anastasia is more or less my territory, but Mike is always there to make sure Hellboy is still being Hellboy. That’s what I love most about it, actually––taking this character who is very much her own person, who is brilliant and fearless and who loves to keep Hellboy off-balance with her frankness.

GVN: A strong woman will do that…just ask my wife. So, you described Hellboy in Love as a Romancing the Stone style chemistry mixed with the same “occult weirdness” that is a natural element in Hellboy. Being a big fan of Romancing the Stone (and knowing Hellboy’s taciturn personality), that had to have been a lot of fun to write. Were there any parts of your story that “hit the cutting room floor” so to speak? Just because you had too many great ideas for the couple’s interactions?

CG: Not yet! They were together for nearly two years, so we have a lot of adventures to explore. As for the chemistry…it’s really the first time he’s truly out from under the shadow of Professor Bruttenholm. He’s free to just be. But weird shit always happens. Anastasia’s research brings her into some very strange circumstances. They just bounce off each other in a really fun way. They truly fall in love, but for both of them, there are outside, real-world pressures working against the kind of honest happiness they find together.

Matt Smith to the Rescue

GVN: It really is going to be a fun series. As I mentioned, you worked once again with the talented Matt Smith on Hellboy in Love. Has your relationship with Matt made these collaborations kind of stress free as opposed to working with someone new to you?

CG: I’ll tell you, in the second story—issues three and four of the series—I wrote a thing that I’d never have written if I didn’t have faith in Matt to save my ass. A lesser artist would never have pulled it off, but I had such confidence in him because Matt is not only supremely talented, he’s also the kind of artist who will sit and figure out how to translate something onto the page to make the story work. I’ve promised not to saddle him with something like that again.

Not only is he talented as hell, but he’s a truly good human. Half the joy of working on the various comics I do with Dark Horse and Mike Mignola is the quality of the people involved, from Matt to Peter Bergting and Bridgit Connell, to our editorial team of Katii O’Brien, Jenny Blenk, and Misha Gehr. I had a conversation last month with colorist Chris O’Halloran for the first time, and I’m proud to have him on these books. I love making comics with these people.

GVN: Big fan of Chris’s work. Thanks again, Christopher for sharing a little of your time. As always, before I let you go. Do you have any other new projects underway that you can speak of?

CG: In comics, there’s an unannounced creator-owned project coming from me and my frequent prose collaborator Tim Lebbon, also from Dark Horse. More on that soon. Dark Horse just released Festival, a prose novella I wrote with Tim, with illustrations from Peter Bergting. My novel Road of Bones is out in paperback in December, and my new novel, All Hallows, will be out in hardcover in January. I’m currently working on a number of secret projects, including an audio drama series, a feature film screenplay, and several other audio projects that will be of particular interest to your readers. But more on those when I’m allowed!

GVN: So, in other words…”You got nothin!” (Laughs) The plus side of all that productivity is that we will get to talk to Christopher again in the future. The first issue of Dark Horse Comics Hellboy in Love by Mike Mignola, Christopher Golden and Matt Smith is available now.