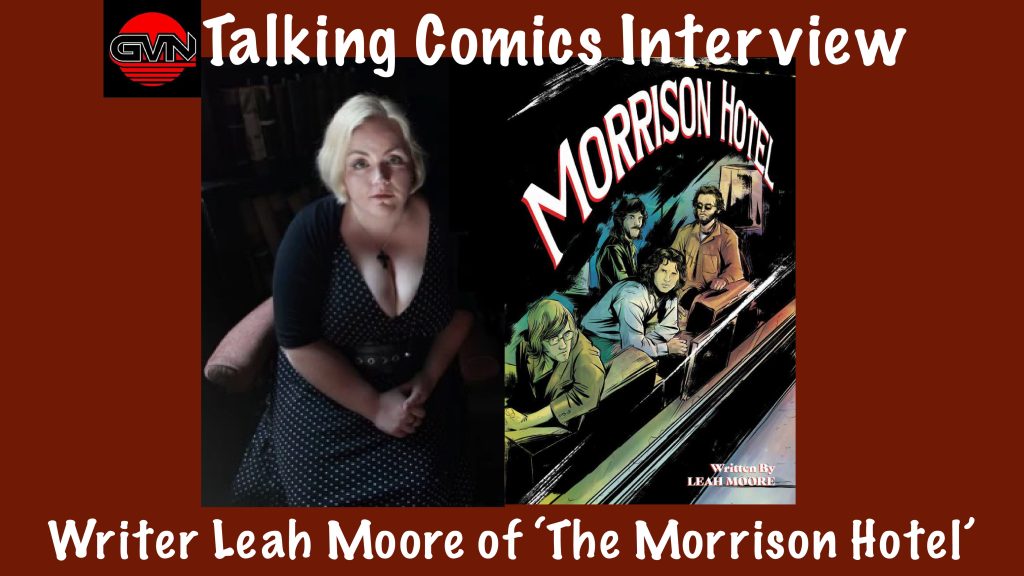 Leah Moore is no stranger to the comics world. In fact, she was practically born into it. Her father is acclaimed comics writer Alan Moore who has written some of the most iconic titles including Watchmen, V for Vendetta, and Batman: The Killing Joke. But not to be left behind, Leah has become an accomplished writer on her own and in conjunction with husband and fellow writer John Reppion. Her most recent work The Morrison Hotel  for Z2 Comics is an incredible collection of stories exploring the iconic rock group: The Doors. So it is with great excitement that we welcome Leah Moore to GVN’s Talking Comics Interview. 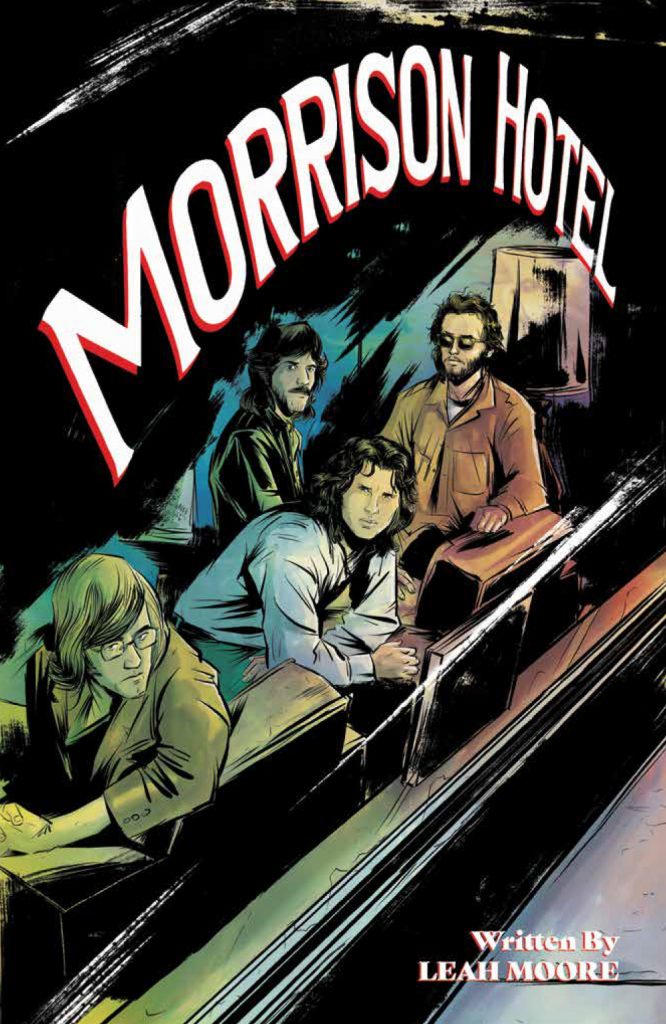 GVN: Thank you for giving us some of your time, Leah. First off, I have read through The Morrison Hotel and it is one of the most unique books I have ever read and the art is amazing in its diversity. How did this project come to fruition and were you a Doors fan going in?

LM: Back in 2008 editor Rantz Hoseley got me to adapt ‘Hey Jupiter’ for Comic Book Tattoo, with Pia Guerra drawing it. It was only eight pages, but it was a great challenge, and the book that came out of it was incredible. A phonebook-sized anthology with the best talents in the business, it was a thrill to be a part of. When he dropped me a Facebook message asking if I’d be interested in writing a Doors book, I nearly threw my phone across the room.

I’ve been a Doors fan since I was about 13, like a lot of people. I watched Lost Boys, and totally bought into the woozy-sexy Californian goth vibe, the soundtrack, the whole thing. Me and my friend Kerry from school used to obsess about The Doors. So much so we dragged our whole Paris field trip off to see Jim’s grave at Pere Lachaise cemetery in the rain. The question from Rantz was absolutely a no-brainer. I think I just sent FUCK YES.

GVN: You have a partnered with the remaining members of the Doors on this project. How much input did they have and did they suggest topics that you hadn’t thought of going in?

LM:  We had a lot of help from them going into it. They gave us access to a huge photographic archive, and suggested that the book not just be an autobiography, but encompass the times the album was released in. We got a list of events from 1969 that might be useful, and wow…it was a hell of a year.

We basically cherry picked the ones we thought might fit with some of the songs. We also dug into the research to make sure those stories were as true as we could get them to what happened. There are also stories that aren’t based on stuff from the news. However, they do tell a little of what was happening to the band. And, of course, there are some that are just adaptations of the lyrics, like Comic Book Tattoo. It’s a graphic novel that is basically a really high-end indie anthology…and I got to write the whole thing!

GVN: You have an impressive list of artists involved in The Morrison Hotel and their different visions of the narrative really makes the book shine. How did you select who you would work with on the various chapters? Was there any must haves on your list of artists?

LM: Rantz rustled up most of the incredible artists on it, and then I suggested some options after that. We basically pitched ideas for the stories, and when they got approved, we matched the stories to the art. When I found out John K. Snyder III was drawing one of the Vietnam stories, I was so happy! I grew up reading my dad’s big EC collections of Frontline Combat, and Two-Fisted Tales, so his style was just perfect.

Marguerite Sauvage was another moment I had to pinch myself. I’ve loved her art for so long, she just makes comics look so clean, and fresh, and stylish.  So the idea she would draw “You Make Me Real” just blew my mind. I’m going to say this now: having a giant pile of incredible dream wish-list artists drawing your teenage crush over and over and then sending you the results is about the best and weirdest bit of wish fulfillment you could ever have. I want to go back and tell me and Kerry to hang in there!

What’s in it for Doors Fans?

GVN: What do you think a hard core Doors fan might learn from your book and what could a new reader gain?

LM: Well, I hope a hardcore fan will enjoy having the dots joined up between things like Jim’s dad’s naval career and the Vietnam war. Or perhaps, the sequences of events that caused the ‘Miami Incident,’ which was a really dramatic turning point in the careers and lives of the whole band. Jim was vilified for lewd behaviour, and the whole band was punished for it with their tour cancelled. The effect that must have had on Jim and the guys, and their relationships must have been huge. But it wasn’t as cut and dried as it was reported. I guess, for new readers, I think there is something for everyone in there! I just hope people get what I was trying to make—that’s always the aim, right?

GVN: This is really an impressive book. If it is as well received as I would think, would you consider doing something similar with another iconic musical group or performer? And if you could, who might it be?

LM: Oh god, don’t tempt me, I have a shopping list a mile long. I guess the top of it would be like Jimi Hendrix, or Patti Smith? Iggy Pop or The Velvet Underground? Can you imagine? There are tons of women’s stories I would kill to tell. A big ‘90s Riot Grrrl anthology would be amazing, or do an ‘80s punk one, with Poly Styrene and Siouxsie Sioux, The Slits, Joan Jett. I did a story about Beth Ditto from Gossip for Shelly Bond’s Femme Magnifique, so I would love to do a whole GN on Beth Ditto! I don’t think there can be too many of these books. Comics and Rock music are just a perfect match!

GVN: You are no doubt right about that. And that is an amazing list you bring up. Perhaps, in the future, if things go well, some of these will become a reality. Thank you again for sharing your time and your book, Leah. Finally, do you have any new projects coming up you’d like to share with our followers?

LM: I am currently writing a GN for Liminal11 called The Tarot Circle about a group of women who read tarot cards together. It’s partly about the history of Tarot, but mainly how reading your cards is like having a wise older friend who loves you but sees through your bullshit. That’s a lot of fun. I’m also working on a game project I can’t say about, and I have a half-finished novel my agent would really like me to finish!

GVN: So it looks like we have a lot to look forward from you in the future. We really appreciate it Leah and we will be following in the release of The Morrison Hotel with great interest. The Morrison Hotel is scheduled for release March 23rd from Z2 Comics.