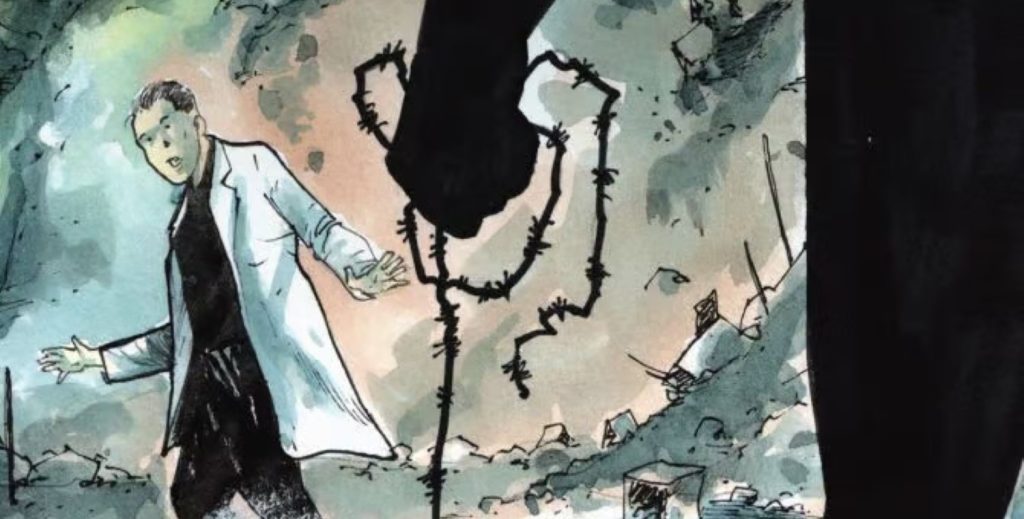 When we last left the goings on of a Legacy of Violence, another victim had been put on display. Skinned alive with the skin left on the hood of a car while the victim stumbled into the bar where the doctors were drinking. As before, the poor victim was beyond saving by the team. Although it was now apparent that someone was playing an elaborate game that seemed to be focused on the medical team…or more than likely, Nick himself. Regardless, the sheriff has another macabre murder to investigate, and the doctors of Hospital Roajan are the only witnesses.

“Get Your Shit Together”

With this being the second victim that has turned up with the medical team, the Sheriff has become suspicious and confrontational. This doesn’t set well with Nick who has already been entrenched in this since he left Atlanta. Not to mention the still mysterious Unit 731 that is somehow connected to it all. So much so that Nick is hearing references to Unit 731 even when nothing is being said. Much to the alarm of his colleagues. Because of this, his supervisor tells Nick to take the day off. Get away from everything and “get his shit together.”

Searching for the Killer

However, leaving the clinic does not make Nick forget about all that is going on. On the contrary, he is still obsessed with what is happening and why. Because of this, he wanders through the local villages, asking if they have seen anything or anyone unusual…besides himself. Unfortunately, if your goal is to find something, more than likely you will. In this case, Nick stumbles across another body. Laying on the ground with barbed wire wrapped around him. After scrambling down an embankment to examine the victim, he is called to from above. The man he was searching for was there.

Above the embankment, the skull masked individual called down to him by name. Still carrying a rope of barbed wire. Naturally, Nick asked him who the hell he was and why he was doing this. Without answering, the masked man jumped down to where Nick was. When under confrontation, there are usually two choices to make: Fight or Flight. Channeling his best Dr. McCoy thoughts: “I’m a doctor, not a pugilist,” Nick’s first impulse was to run. But before he could, the skull masked man swung his barbed wire rope and lacerated Nick’s arm. Telling him that he needed Nick for Unit 731.

Despite his wound, Nick attempted to climb away. All the while the mysterious masked man kept asking him why he was running. He came all this way to remember. Surely, he wants to find out the truth. The next strike of the barbed wire wrapped around Nick’s ankle. As he closed in, he wrapped the wire around Nick’s throat from behind. But in desperation, Nick thrust his head back, hitting his assailant in the face, temporarily stunning him and allowing him a brief respite. However, the man was relentless. He grabbed Nick, this time from the front, squeezing his face between his hands. Time seemed to stand still as Nick looked him in the face (or the mask) and told him to let him go.

Much to be Done

Surprisingly enough, the man complied, releasing Nick’s head. He explained that they really didn’t have time to fight anyway. There was much to be done for the two of them. But first, he needed to find out if Nick was up to the task. Whatever THAT was.

Issue 3 has left us with more to think about than ever with no real questions answered. Who IS this masked man? How does he know who Nick is? What connection does he have with Nick’s grandfather and the still so mysterious Unit 731? What purpose does killing all of these people serve and why those particular victims? Writer Cullen Bunn and artist Andrea Mutti have done a masterful job of encasing the reader in a “rat’s maze” of questions and enough intrigue to require that we find out the answers. The beauty of it all is that I don’t have a clue what will happen. More victims don’t necessarily equate to more answers. Which is intriguing in itself.

Mad Cave Studios A Legacy of Violence Issue 3 by Cullen Bunn and Andrea Mutti is available now. Check it out from Mad Cave’s Subscription site here.