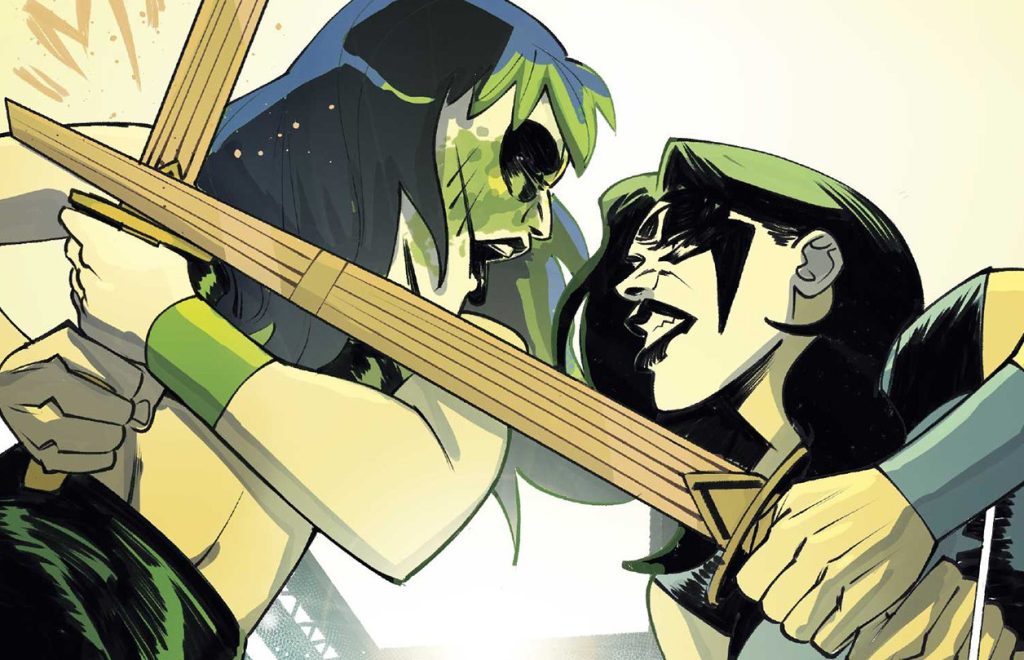 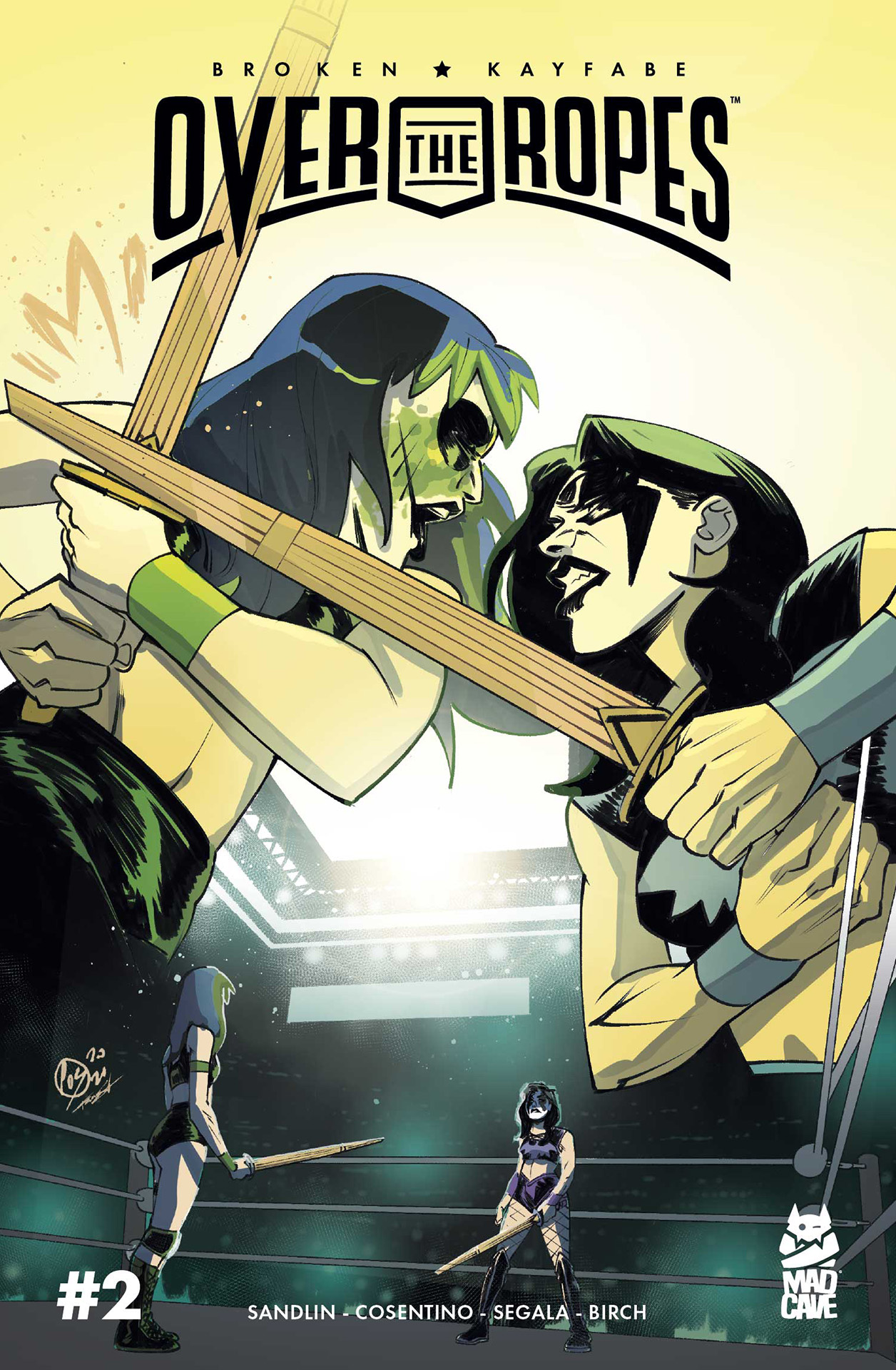 When we last left the new hit wrestling show, SFW Explode, it lived up to its name. AWF champion Buddy Peacock and his “Peacock Posse” did a Nuke LaLoosh and “announced their presence with AUTHORITY! Much to the chagrin of SFW Champion Phoenix and his girlfriend Scorch. Although the girlfriend title is in flux at the moment. Now, all concerned parties are meeting with SFW owner and booker Ricky Radison as he explains the angle, he and Peacock have agreed to.

Unfortunately, Phoenix can’t get over the resentment he feels for Peacock, his absentee Father. He will accept the match. Especially if it gives him the opportunity to take out some of his abandonment issues on “dear old Dad.” But before THAT can happen, there would be a Unified Women’s Title Match. Between the AWF Ladies Champion Yuri, who resembles a female version of the Great Kabuki, and to HER surprise, Scorch! It would be a kendo stick match with the winner being crowned the Unified Champ.

Courtney wasn’t sure who she was more upset with. Radison for setting up the match when she had no plans to make a career in wrestling, or Jason for not standing up for her. But he was too consumed by his need to get revenge against Peacock. As for Yuri, she wasn’t about to let this match go without a fight…so to speak. Trying to goad Scorch into accepting the book. First, by calling her a coward and then mentioning how the wrestling “Dirt Sheet” considered her a fraud who is getting by on looks and riding Phoenix’s tail feathers. (They didn’t say that last part exactly…I took artistic liberties).

So, Scorch had some decisions to make. Not only about the possible match with Yuri, but her life and an opportunity of a life with Jason. Sometimes, the best way to figure things out is in the ring. At least, where Barbwire Brody’s School of Hard Knocks is concerned. It is with Brody’s help that she decides what to do. At least as far as the MATCH is concerned. Because when Courtney decides to walk away from wrestling, it will be on HER terms. Not because some painted faced blowhard scared her away. So, the match is on.

But while the decision was made as far as the match was concerned, there were still some obstacles to be navigated as far as Phoenix and Scorch were concerned. Jason found that out when he tried to accompany Scorch down the ramp. Courtney forbids him from doing so. She would prove to the “Dirt Sheet,” to herself, that she could do this without Phoenix. Win or lose, it would be up to her.  Along with the added obstacle of the ring being set up in the middle of a large swimming pool. This WAS Tampa Florida after all.

The match was a hard hitting, no holds barred affair. Especially when Yuri went all “Great Kabuki” on Scorch, spitting a green mist into her face. (I told you… if you’re not familiar, look up “The Great Kabuki). While temporarily “blinded,” Yuri wore Scorch out with the Kendo Stick. Appearing to be holding nothing back with each thunderous crack of the bamboo.

Things were looking bad for Scorch. But like most fan favorites do, she rallied. First by catching Yuri coming in with an impressive “Super Kick” and then following it up with a modified hold that Brody had taught her. Modified by using the broken Kendo Stick across Yuri’s face. She eventually tapped out making Scorch the Unified Ladies Champion. Not too bad for “just a pretty face.”

The Secret is Out

But as any wrestling fan knows, a win doesn’t mean the battle is over. Especially when you feel you’ve just been embarrassed on Live TV. Yuri throws Scorch out of the ring and into the water. Following up by dropping on her and holding her under. Talk about sore losers. This brings Phoenix and Brody to ringside to break it up before Yuri drowns the new champ. Naturally Buddy Peacock also appears which sets off Phoenix. However, in his zeal to attack Peacock who he now blames for Yuri’s attack on Scorch, he confirms loudly their family connection. Just what the folks at the Dirt Sheet wanted to hear!

One of the great things about Over the Ropes is the wrestling homages that writer Jay Sandlin embraces with every issue. One such is the aforementioned resemblance and look he and artist Antonello Cosentino endow Yuri with. Especially using the green mist made famous by The Great Kabuki and later The Great Muta. Also of note is the mention of Gene Labell. Labell was known as the “Godfather of Grappling” and was the basis of Brad Pitts character in Once Upon a Time in Hollywood. Absolutely cool stuff. It looks like Booker Sandlin and Promoter Cosentino is setting the stage for a great show in the coming issues.