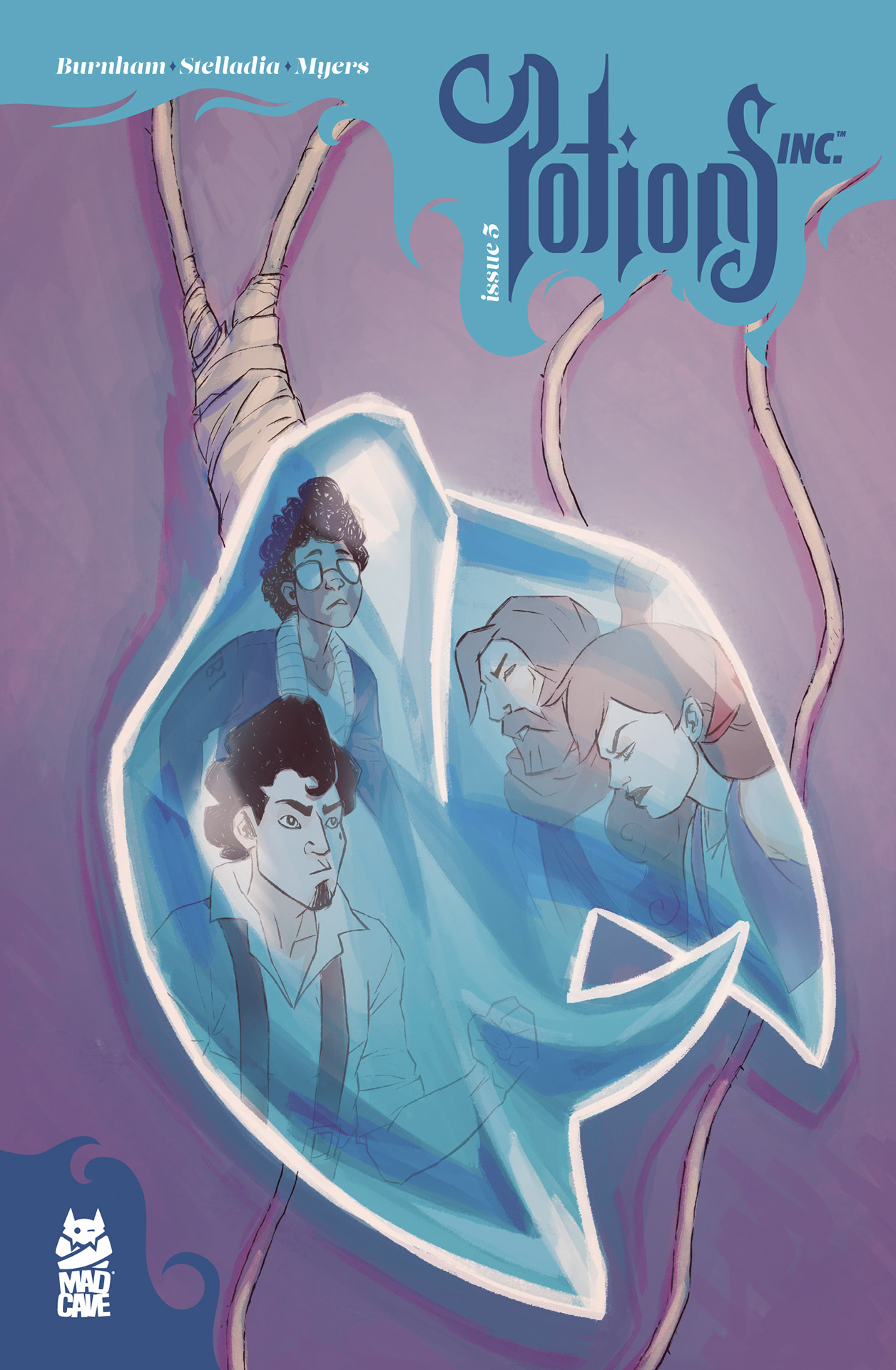 When we last left Potions, Inc. Goras had both parts to the Fordstone as well as Ran’s siblings Astreus and Asteria. He was now preparing to siphon the inert magic of the human realm to give to Primaterra. At least, that is what Goras CLAIMS to be doing. Now, it’s up to Ran and Geneva to find them and set things right. Fortunately for them, Geneva’s father used a spell to boost their focus and their magic. Although, the fact that Geneva could even USE magic was only a recent revelation. Regardless, they had a job to do and were the only people standing between Goras and his goal and stopping the curse that was affecting both Ran and Geneva’s parents.

Speaking of the curse, Astreus and Asteria are trying to compel the astral projected Poncelina to help them stop her grandfather from enacting his plan. She is unmoved to assist. The fact that her chances to come back to the living world are dependent on his success MIGHT have something to do with that. Despite Astreus attempts to charm her. However, they keep trying, hoping that the curse that was placed on the stone might emote some sympathy from her.

Lifting of the Curse

That is when Goras reappeared, eating like a teenager after a marijuana party. He assures them that the curse he put on the stone was NEVER intended to be a death sentence. Just a punishment. And since he now had the stone, he could afford to be generous and proceeded to lift the curse. Perhaps now, the twins could see fit to allow him to complete his task. Not that they had much choice since they were all tied up…so to speak.

After the renewed confidence that Geneva’s father had bestowed upon them, Ran and Geneva approached the place that Ran’s vision had revealed as the location of Goras. Whereas Ran wanted to wait until Goras had started his spell to extract the Earth’s magic to Primaterra, Geneva decided to go in like she was busting a drug house, gun at the ready. Goras was not impressed by her requests to drop his wand and put his hands behind his head. He instead attacked with his wand as Geneva used her powers to block…much to the surprise of Goras.

While that confrontation was going on, Ran used his powers to free Astreus and Asteria. Much to THEIR surprise as well since Ran seemed to be in complete control of his magic. Will miracles never cease? After freeing his siblings, he looked to assist Geneva against Goras, who for the moment, seemed to be holding her own. Much to the frustration of Goras, especially with Poncelina ragging him about having a hard time with a novice magician. However, Goras was not finished as he used some of the magic, he had tapped into on Earth to boost his attack. Ran and Geneva needed to come up with a different plan of attack.

Ran suggests that they combine their powers, while at the same time tapping into the same source that Goras was using. Eventually they overcame his attack and overwhelmed him with an almost tidal wave of power, knocking him to the ground. Poncelina once again teased her grandfather mercilessly for his apparent failure. But he knew he wasn’t finished. Not as long as he possessed the Fordstone. YES!! The Fordstone….but where did it go?

During the skirmish, Astreus had picked it up and the wand it was attached to when Goras had it dislodged from his hand. Goras pleaded with him to return it to him, so that he could finish what he started. He had done the boy a service when he saved his parents from the curse. He felt Astreus owed him for that. But when Astreus didn’t seem to agree, Goras attempted to take the wand. Only to be zapped by Ran into unconsciousness.

The question was now, what would become of Goras. Geneva had a thought. Especially since he was no longer a threat without his wand. The next day, it was revealed what had become of the once powerful Kanavin Goras. Geneva had the former wizard committed. She claimed that he was a danger to himself and to others. This was proven further when he regained consciousness and started talking about Primaterra and Magic. If that wasn’t bad enough for Goras, he still had Poncelina haunting him. Since he would not be able to return her to her former state, she would be nagging him for eternity.

As for the visitors from Primaterra, Astreus and Asteria readied to return home. Geneva’s father also planned to return to Primaterra as he had missed it. Ran however, decided to stay in Seattle and explore more of the human world. Asteria left Ran with their father’s potions book. She had memorized it anyway and she could always create a new one for their dad. However, the book gave Ran an idea. So, a few months later, Ran opened up a new magic shop: Potions, Inc. and Seattle would never be the same…

This was an enjoyable fairy tale like narrative that pushed all the right buttons for the genre. Good vs. Evil, parent- sibling conflicts, lessons learned with a warm and fuzzy ending to bring it to a close (at least for our heroes…for Goras? Not so much.). While at the same time, leaving room for a continuation if so desired. The characters were relatable with a sense of humor while sharing some of the same foibles we all do. Self-esteem issues in some, over-confidence in others. While at the same time, feeling that the “adults” just didn’t understand. All in all, another quality addition to the ever-growing Mad Cave Library by talented creators Erik Burnham and Stalladia.