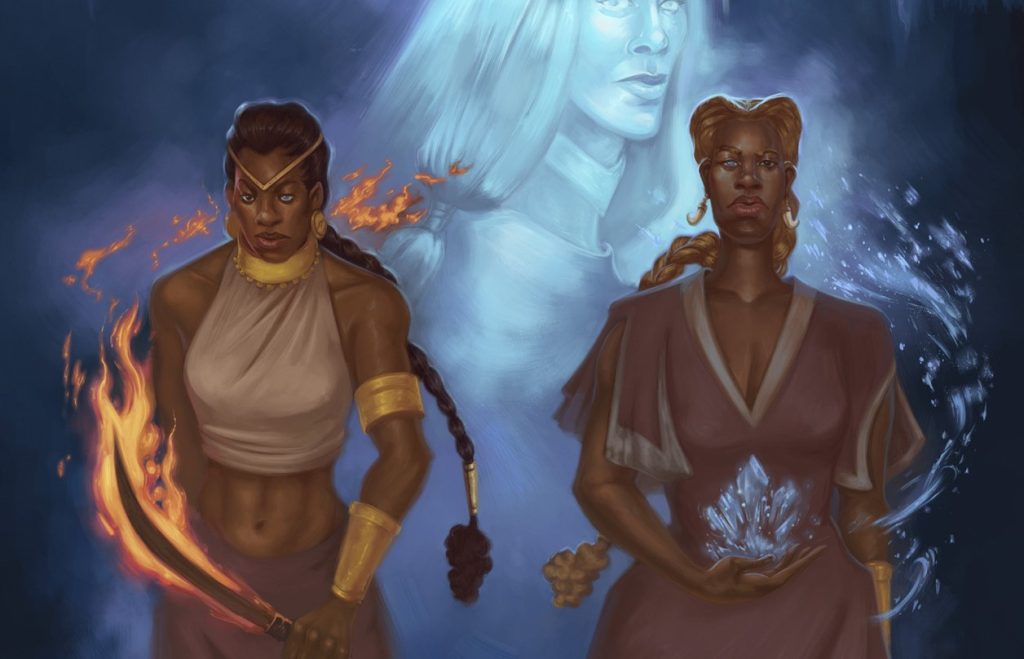 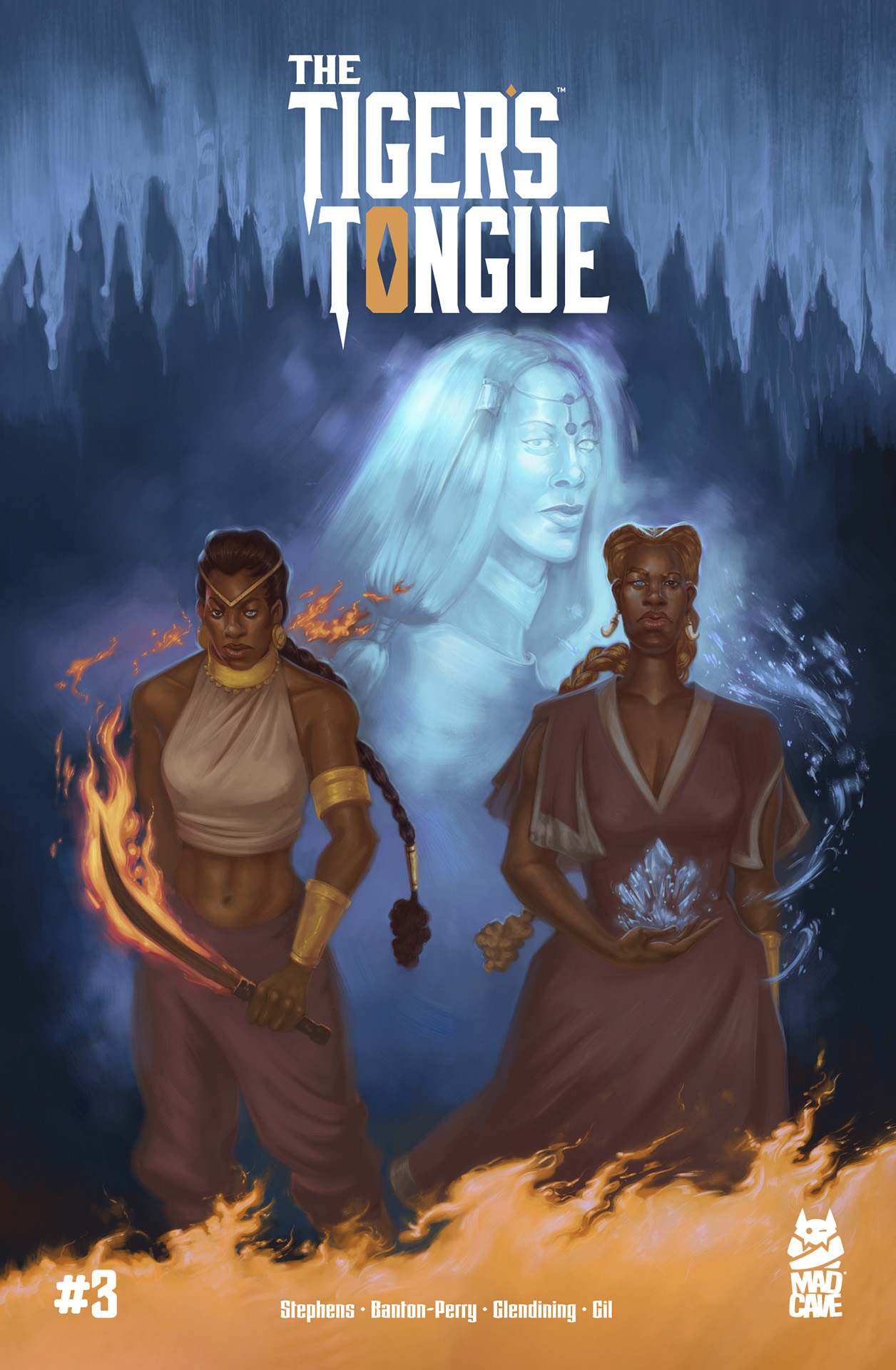 When we last left The Tiger’s Tongue, the first of the three trials to select a new queen for the Tiger’s Claw had been completed. Kelindi had won that first trial as might have been expected. She had been preparing almost since birth for the position. While her sister Dani took no interest. However, during the first trial, Dani had a vision of wandering into the Tiger’s Crypt and had a communion of sort with their mother. She let it be known to Dani that she would one day rule. Not exactly what Kelindi wanted to hear.

Later that night, Dani once again made the trip to the Tiger’s Crypt and once again, encountered her mother. She invited her daughter to accept the power that was her destiny. The same powers their ancestors used to “redeem the land.” She embraced Dani and a blue glow of power enveloped her. Not without some pain. But when it subsided, her once brown and blue eyes were now both blue.

While the six-day waiting period was underway, Kelindi snuck off to see her friend Skal. The river people were once again gathering to discuss their grievances with the King and the Tiger’s people. They had had enough of being oppressed. Of breaking their backs to pay tribute for the privilege of working a land and the river that is rightfully theirs. Soon they will know that they are NOT the Tiger’s people. They are the RIVER people, and they will be free.

As Kelindi listened, her face covered to disguise her identity, troops from the Tiger’s people came to disrupt their meeting. In the chaos, Kelindi attempted to intervene, hitting one of the guards. Skal quickly pulled her away before someone recognized her. As much as Kelindi wanted to help, it would do no good if Kelindi’s presence was revealed.

Later, on the day of the 2nd trial, Kelindi watched as Dani approached, surrounded by her entourage. They were supposed to have met for breakfast before the start of the trial. But Dani seemed to have forgotten this. Kelindi asked to speak with Dani privately. She worried about the changes she had seen in Dani since the first trial. She seemed so aloof. So, unlike herself. Not to mention the change in eye color.

Dani assured her that she was fine. But Kelindi wasn’t so sure. She also worried about the now persistent rioting by the River People. Dani shot back that perhaps if Kelindi had learned to harness her power, those riots would cease to be an issue. Upon that, Dani turned on her heels and left. Kelindi was right. Dani WAS different now. Whether that was a good thing was yet to be seen. After exiting their meeting, Dani told Karion the Tiger NOT to go with her for the next trial. Different indeed.

Trial of the Spirit

The Trial of the Spirit is the 2nd trial. They will both enter the aforementioned Tiger’s Crypt. In doing so, they will be blindfolded and have to rely on their connections to their ancestors to navigate the Crypt. Dani is confident as she proceeds. In no time, she once again hears her mother’s voice. Her mother is so proud of Dani. She is embracing her power and her destiny. But she also tells Dani to not fear anyone on the outside who might stand in her way. “For they are as good as dead.” That was ominous. But she follows the voices, and they lead her to the exit and victory.

As for Kelindi, her lack of ability to commune with her ancestors is proving to be a hinderance. Not only that, but once she does make contact, her ancestors are displeased. They call her a traitor. They know that she secretly stands in support of the River People. At least partially. They also question why they should help her when she had never reached out to them before. She never even learned the Tiger’s Tongue. Their hostility was unexpected by Kelindi.

Soon the vision changes to her father. They are sparring and Kelindi shouts at her father, explaining that the situation with the River People is all his fault. He did not disagree…to a point. But he also explained that it became very easy to sit back and watch things wither and crumble. After she and her sister killed their mother. Kelindi ran off in a rage. Still listening to her ancestors berate her. But it provided fuel to her strides and soon she found herself outside the Crypt. She had lost. They were now tied one to one.

Once SHE is Queen

With the final trial being held in six days, the crowd started to disassemble. Dani went to her friend Phin, whose family makes the finest weapons and armor for the court. While Phin was pleased for her friend, she reminded Dani that she probably shouldn’t be there. Her family works for the court, but she is still a member of the River People. Her presence would not be appreciated by those in attendance. Dani assures her that things will improve. Once SHE is Queen.

The next day, Dani sits with their father. He too has noticed the change in Dani since the trials had begun. She assured him as well that all was well. She was just growing up. Finally becoming who she was meant to be. Even if that meant hardly acknowledging her sister anymore. It is for the best. They will all see.

Later, Dani is walking through the marketplace with Karion by her side and her entourage behind her. It hardly takes any time at all before those in the crowd start to heckle her. Telling Dani, she is not welcome there. While normally this might have driven Dani to tears, now it angers her. She demands their respect. When one of the River People approach to force her to leave, Dani uses her newfound powers. Blasting the approaching woman and sealing her inside what looks like a structure of ice. The next blast appears to break apart the block, along with its occupant. She appears non-plussed by the whole event accept to say that “You WILL Learn Respect!”

With issue three, writer Olivia Stephens and artist Diansakhu Banton-Perry have pulled off a complete reversal of fortunes between the sisters. At the start, it was Kelindi who has the firm ambition to rule after their father. Now, due to the events in the Tiger’s Crypt, things have changed. The once meek and rather unmotivated Dani has now embraced leadership. During this transition however, she has grown distant to both her sister and her father. Not to mention the power she now wields. Although, after the events in this issue, it is questionable if she has maintained the wisdom to go with that power.

It is a brilliant transformative tale thus far and explores not only the sister’s relationship but the social structures of power and what it can do. Both with people (The River People and the Tiger’s People) as well as family. Stephens and Banton-Perry have laid the groundwork for an entertaining and perhaps heartstring pulling climax in the last two issues. I for one can’t wait to see how it comes out.