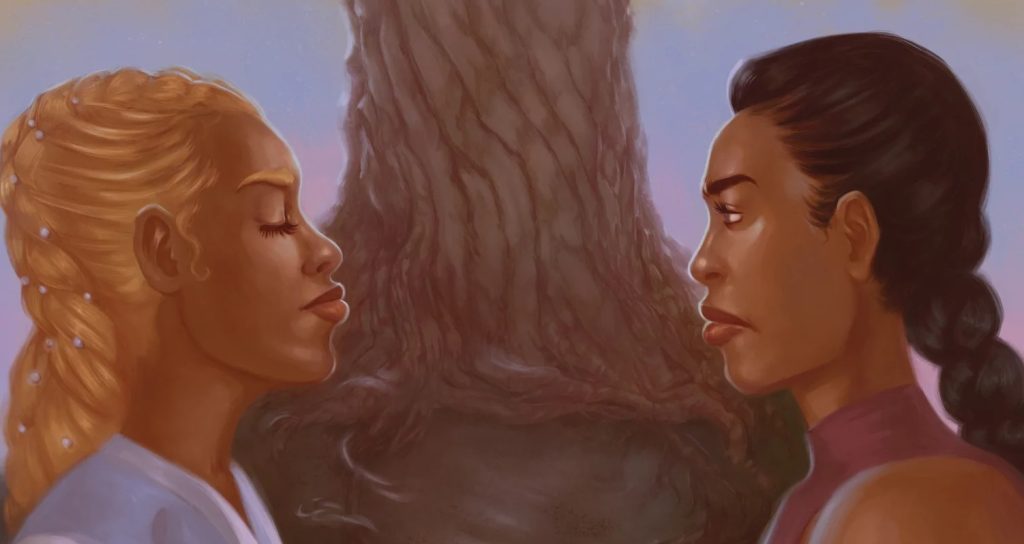 When we last left the Tiger’s Tongue, it was revealed to the princesses that instead of the assumption that Kelindi would assume the crown after their father, there would be a battle. The two sisters would undergo a series of challenges to prove who was worthy of ruling. This was a secret that was kept from them until this moment. Needless to say, neither was pleased.

Aridani because she never sought the crown. She always knew that Kelindi was the natural heir apparent. Kelindi was upset because she had worked hard to prepare herself for rule. Only now to be told she would have to prove herself…again! While their father understood, the prophecy was to be honored. Whether either sister wanted it or not. Such was the way of the Tiger’s People and the Tiger’s Tongue.

Aridani spoke that night to the Grand Tiger Karion about the morning’s first challenge. She was not prepared and a little miffed that Karion had never warned her about what was coming. He explained that he could not as both she and Kelindi were not to be told until the proper time. None of that alleviated her worries. But Karion told her that all she needed to do was follow him.

The first task was the Trial of Mind. The girls were given maps of the forest. The very forest where their predecessors fought the river people to establish their kingdom. The ghosts of those warriors still echo amongst the ancient woods. Their goal is to find the fang of the Grand Tiger, that was lost in the battle’s ruins. With that, the first challenge had begun.

The Race had Begun

Naturally, Kelindi raced off ahead. She had honed her body and her mind for such tasks. There was NO WAY Dani would beat her. Her reasoning was not unsound. In no time at all, Dani was questioning if she even had the right map, she was so lost. While Karion walked by her side, he refused to assist her in the challenge. To do so would be cheating. Dani then questioned what he had meant last night about following him, if he had no intention of helping her. Other than making sure she didn’t trip and die.

He had to say it. For no sooner had he mentioned it than Dani tripped and fell into a ravine. As she struggled to her feet, Karion was there, telling her to follow…through their link. In the vision, Karion led Dani to the Tiger’s Crypt. Inside, were the spirits of her ancestors. Including what appeared to be her mother. Daughter and Mother embraced as Dani was told by her mother that “Her reign would bring about a newer, better world.”

It was in the midst of Karion and Dani’s connection that Kelindi had come upon them. She wondered what was going on. Dani came out of the vision with tears streaming down her face. She told Kelindi about the vision, seeing their mother, and what she was told. Upon hearing it, Kelindi exploded. The entire situation was insane. She had planned her whole life to rule. While Dani did nothing. Nothing but talk to Cats and dreams of dead mothers. In fact, she was so pathetic, she needed rescuing in a forest she should have known like the back of her hand.

Dani shed more tears this time. But not tears of joy. Her sister’s invective was like a slap to the face. Listening to Dani’s sobs and realizing how harsh she had been, Kelindi apologized. But she also knew that she SHOULD be the one who rules. She knows that Dani realizes it too. Dani would make it easier on everyone if she just stepped aside and allowed Kelindi to assume her proper role. Dani agreed. But I doubt it would be that simple.

At the end of the first trial, Kelindi had found the fang. The first task was hers. But still the people were skeptical of what would become of Kelindi’s rule. She appeared to want to make peace with the River People. Instead of putting them in their place. At least, that is what was said behind the scenes. Finally, Dani arrived to the cheers of many of the gathered crowd. The King made it known that the second task, “The Trial of the Spirit,” would take place in 6 weeks.

Return to the Tiger’s Crypt

That night, Dani slept an uneasy sleep. She woke to find Karion looking at her as they once again entered a vision. Once again entering into the Tiger’s Crypt. This time her mother appeared and asked her to join with them. To bring the claw away from divisions of hatred. As her mother hugged her, a mist engulfed her, causing intense pain. By the time it had subsided, her eye colors, which had been both brown and blue, had changed to BOTH being blue. Something had happened…. but what?

Writer Olivia Stephens has wrapped the reader in an engaging tale that mixes fantasy and social unrest that unfortunately, many people can relate to these days. Throw in the family dynamic that in itself is complex and at times troubling. The results could cause a rift not only between sisters but between them and their father. Not to mention the unrest between the River People and the Tiger’s Claw. Stephens has wrapped all of this within a supernatural box that almost impels you to read the next chapter. It’s literary spellbinding at its best.

Artist Dianskhu Banton-Perry continues to push the narrative along while at the same time showing growth as she gets more familiar with the characters and the settings. Along the way using a nice mix of perspectives to emphasize not only the action, but the standing between Kelindi and Dani. Sometimes having Kelindi seem to tower over her more reserved sister. I look forward to seeing her talents continue to expand.

Mad Cave Studios, The Tiger’s Tongue Issue 2 is available August 10th where great comics are sold. Plus, there is Mad Cave’s Subscription options for those who enjoy the digital version. This can be found here.