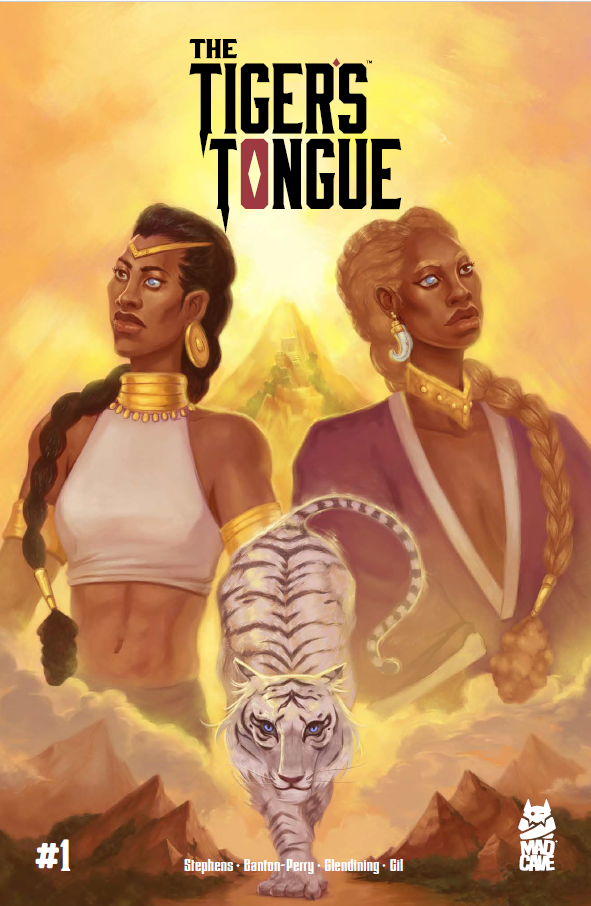 When you are kind to others, it not only changes you, it changes the world – Harold Kushner

As many classic stories tell us, you never know when a good deed will be a game changing moment. Such is the case in the magical new book brought to us by Mad Cave Studios in The Tiger’s Tongue. Creators Olivia Stephens and talented artist Diansakhu Banton-Perry have created a allegorical fairy tale that both enchants and teaches.

The good deed is explained in the opening segment as many centuries ago, a small village warrior had saved a tiger from death. In repayment for this kindness, the Grand Tiger pledged his fealty to the warrior and his village, claiming the people as his own. The tiger shared with the village his peoples wealth and powers. One of which was divine prophecy, sharing their visions with the people using the “tigers tongue.” 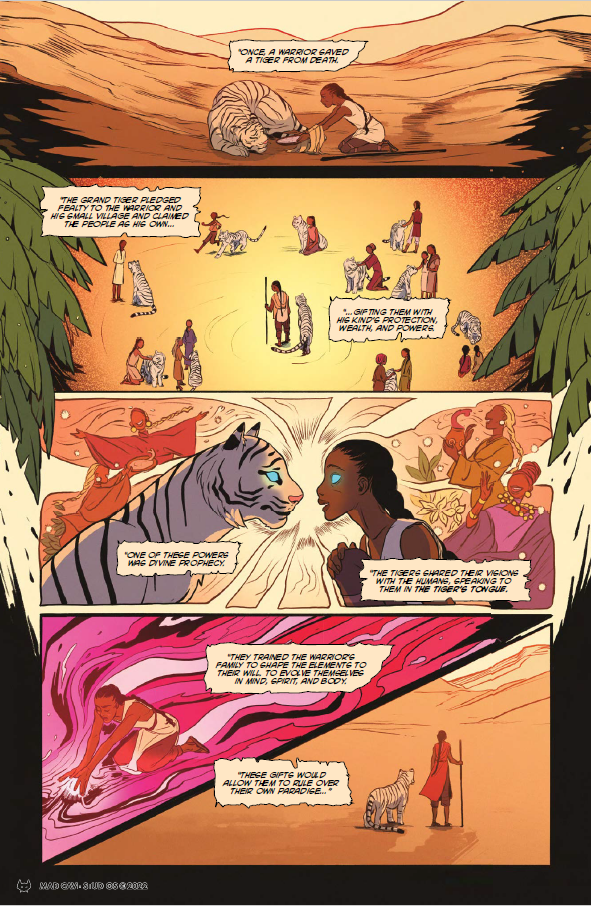 As the village grew more prosperous, the Tiger trained the warriors family to evolve themselves in mind, body and spirit. In time, making their land a paradise. They eventually happened upon the River people. The first Queen of the Tiger’s people decided to raise up a great mountain from the river, naming it the Tiger’s Claw. They then offered to share the Tiger’s Claw with the River People, IF they gave them their loyalty and tribute. Such generosity. The River People reluctantly agreed as the Tiger’s People claimed them for their own.

Resentment Among the River People

Two hundred years later, there is a growing discontentment in the River People. They want to return to their own ways. So much so thay they are gathering outside the Tiger’s Claw, voicing their displeasure. During this time, multiple births were taking place. The queen was giving birth at the same time as the current Grand Tiger was, unfortunately both passing away in the process. King Oleandra was saddened by the loss of his wife and his old friend.

Before her death, Queen Kembri had given birth to twin girls. Much to the pleasure and foreboding of the King. For there was a divine prophecy by the Grand Tiger for such an event. Upon coming of age, the sisters would do battle to decide which one most embodied the lessons of the Tiger and who would rule. The King ordered that no mention of this prophecy would be shared with his daughters until the proper time. But for now, he would deal with the River People. In his grief and anger, he sent his guards outside ordering no mercy to those who would oppose them.

The King’s daughters, the Princesses Kelindi and Aridani had grown to be intelligent, beautiful, and resourceful young women. Although it was always assumed, at least between the two of them, that Kelindi would rule after their father. Dani had no real ambition to rule. While they were much alike, they were very different as well.  Kelindi has harnessed the power of fire and had great fighting prowess, Dani, however, had no such skills. She had however, mastered the Tiger’s Tongue and speaks to their Grand Tiger Karion often. It was he who told Dani that Kelindi was destined for great things…but not without Dani’s help.

While 18 years had passed, the River People’s discontentment had not faded. In fact, beyond the group known as the River’s Alliance, the call for change had grown. This is reported to Kelindi as she snuck off to visit with her friend Skal. Of course, Skal also tells of a visit that Dani made into the Market place with Karion. Viewed in a much different lense than what really happened.

Kelindi assures her that once she is Queen, she will resolve the issues and bring peace between the River People and the Tiger’s Claw once more. Pretty much assuming that SHE will be Queen, and unaware of the prophecy. But that will soon change. As it, the inahabitants of the Tiger’s Claw have started to whisper about the King. How he has lost much since he lost his Tiger and his wife. He is a shadow of his former self. There is also fear that while Kalinda has power, she is too much a pacifist to put the grumbling River People “back into their place.” As their King had done before he had grown weak.

The Ceremony to pronounce a new Ruler was to be that night. But instead, the King revealed the long hid prophecy that entailed the battle between the two sisters. They would compete in three trials to decide who would rule. Kelindi was shocked and upset. It was ALWAYS known she would rule. She would not concede to her father’s wishes. But he made it clear it was the law of the Tiger’s Tongue. Neither he nor anyone else could change it. The trials would commence.

A great start to this series, laying the groundwork of its history and the atmosphere of what was at stake. Writer Olivia Stephens paints a picture of how responsibility and family sometimes can conflict. Not to mention how one’s position can color how they see things. This is made clear as Skal tells Kallinda the story of Dani and her visit to the market. While Dani showed kindness to a small child, allowing them to ride the seemingly docile Karion, Skal told it as if if the people and the children were in fear of the menacing tiger with its teeth bared. Not too surprising however, knowing the discontent of the River People.

Stephens has set the stage for a beautifully told story of conflict, inequality, and familiar duties. Through that narrative, she discusses how it can be assumed that through power, justifications can be made for anything. Including overthrowing an entire culture. While also exploring how much family ties can and will bind. A great start that should only get better as it progresses.

Bringing Stephens story to life, is the repsonisbility of talented artist Diansakhu Banton-Perry. This was no small task, especially since Olivia is an artist herself. Banton-Perry handles the job with aplomb with a style that both supports and punctuates the classic fabled style that Stephens has laid out. Especially effective was the aformentioned difference between the Market story that happened and Skal’s version of the event. Its a promising beginning to story that will take its place amongst the quality that Mad Cave has been known for. 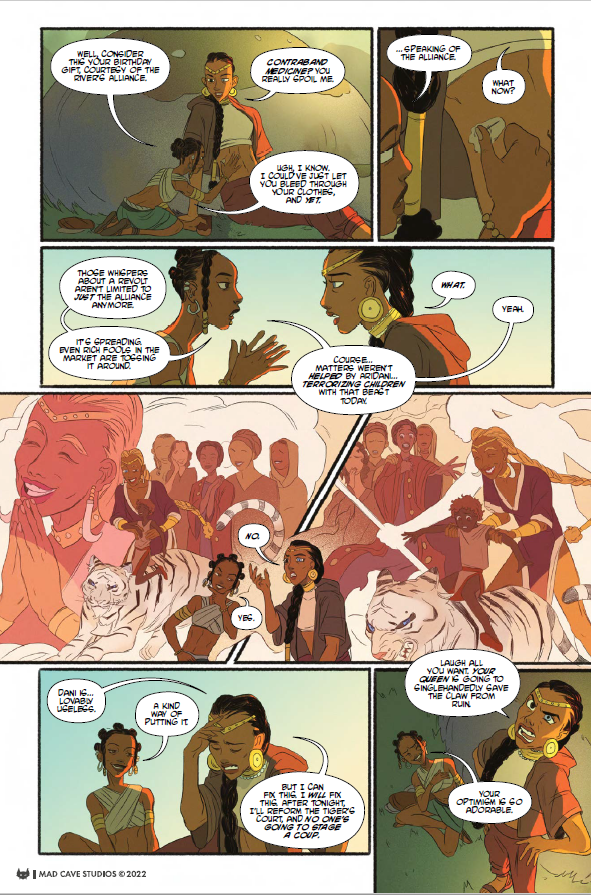