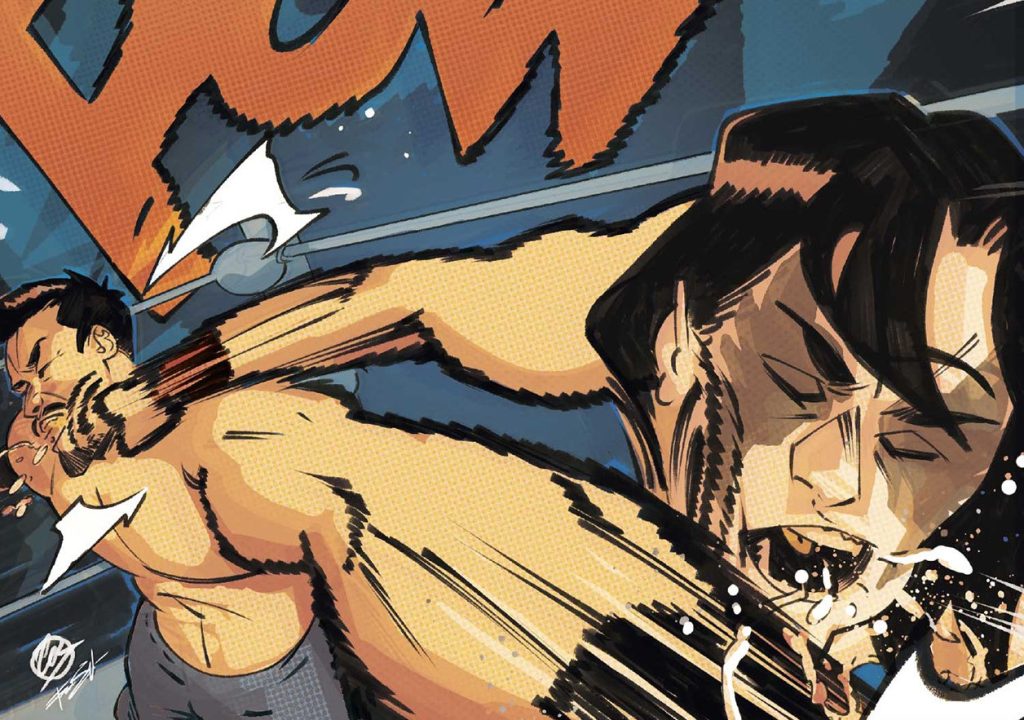 When we last watched SFW Heat, the war between father and son had heated up to a raging inferno. Not only would the unified heavyweight title be up for grabs in a ladder match between Buddy Peacock and Phoenix, but another stipulation had been added. In what would be a reflection of the famous match between Peacock and his rival Ramblin’ Ricky Radison (who is now the owner and booker of SFW) the loser would leave wrestling forever. As if this confrontation NEEDED any more heat!

Meanwhile, as the match approached, Phoenix was working hard in the gym to prepare for upcoming confrontation with dear old dad. Even though his mother wished he would let his hate of Peacock go. The fact that the practice dummy he was working with had Buddy Peacock’s face attached, I assume that would be a NO!

As he worked, the door to the gym opened and Billy Radison entered. The same “Roll Tide” Billy Radison who had helped him in the previous Battle Royal. Although not enough to keep Jason from losing the match to his father. Jason asked Billy why he was there. Just because he had helped him in THAT match, didn’t mean he trusted Billy. Which lead to an unplanned workout…or was that a beatdown with each wrestler taking turns putting the other through their paces.  In the end, it was just the kind of practice that Phoenix needed. But he had other issues he needed to put right as well.

The first was with his friend and former partner Blue Bomber. The one who had left him in the ring when he unmasked his brother Mexiko during last issue’s Battle Royal. But fortunately for Jason, his friendship with Blue was stronger than his mistake. Especially since Blue had proposed to his girlfriend and Jason would be his best man. Both Blue and his brother Mexiko reminded Jason that wrestling was their JOB, not their LIFE! Family and the people you love are the most important and they are the ones’ who will remain after all the fans and prestige are gone. Hopefully Jason would take that lesson to heart.

So, with that in mind, it was time for Jason to reconcile things with Courtney. If it was possible. He caught up to her just as she was being released from the hospital from her injuries in her match with Yuri (Issue 2). Although, she didn’t seem that pleased to see him. He, on the other hand, had a gift for her: a college sweater. She had worked hard to put herself in a position to further her degree. He told her that he would support her in that goal. No matter if it meant a long-distance relationship, they would work it out. Courtney was surprised but pleased. His support meant a lot.

While they were reconciling, Billy Radison called. He told Jason that he had overheard his father and Buddy plotting together about the upcoming match. There was no way they would let Phoenix win that night. Regardless of that information, Jason had one thing in mind. Phoenix would rise and he would have Scorch at his side when it happened. Courtney assured him that she was with him at the start, she would be there at the end. Whatever that would turn out to be.

The time had come. Buddy Peacock vs Phoenix. Winner wins the belt, loser leaves wrestling forever. But first…a word from your sponsor: Madcave Studios Over the Ropes: Broken Kayfabe, Issue 5 by Jay Sandlin and Antonello Cosentino!  Coming to you October 2022.

A “loser leaves town” or “loser retires from wrestling” scenario is a common wrestling staple. In fact, when researching this type of match, I found where the USWA in August of 1989 had four such matches in one month. They apparently had some really flexible contracts. Why?

Because usually, it is reserved for circumstances where one of the wrestler’s contracts have expired and they are moving to another organization. Sometimes, it is an opportunity to showcase a long-time wrestler who is indeed retiring from the sport. One last time to showcase their talents and give fans a special night to appreciate their careers. And of course, sometimes, it is just a gimmick and complete BS. The losing wrestler returns in short order like it never happened. The one thing we know from Jay Sandlin’s work on Over the Ropes, is he is well aware of wrestling’s history and embraces it.

Thus, as we move closer to the Main Event, we do not know which scenario this is. It is possible to be any or all. The only hitch in the program was that Phoenix ADDED the loser retires from wrestling stipulation. It was not originally in the SFW or the AWF’s plans. However, Buddy Peacock and Ricky Radison are veteran wrestlers and bookers. They know how to roll with the punches…so to speak.

The Past Reflects the Present

Speaking of Peacock and Radison, it was a really nice touch to include the montage of their own loser leave wrestling match. Especially during Jason and Billy’s sparring session. Like Father like Son. Great idea by Sandlin and well executed (as per usual) by artist Cosentino. However, I still can’t help myself but still wonder if there is something in the works with Billy and his father. Blame it on an old-time wrestling fan who is naturally suspicious when heels turn face so quickly. Am I wrong? Maybe. But it would be a great plotline for Volume 3. Just saying.

Mad Cave Comics Over the Ropes: Broken Kayfabe, Issue 4 is available now on Madcave’s subscription site. Be sure to check it out so you’ll be ready for Main Event time in October!