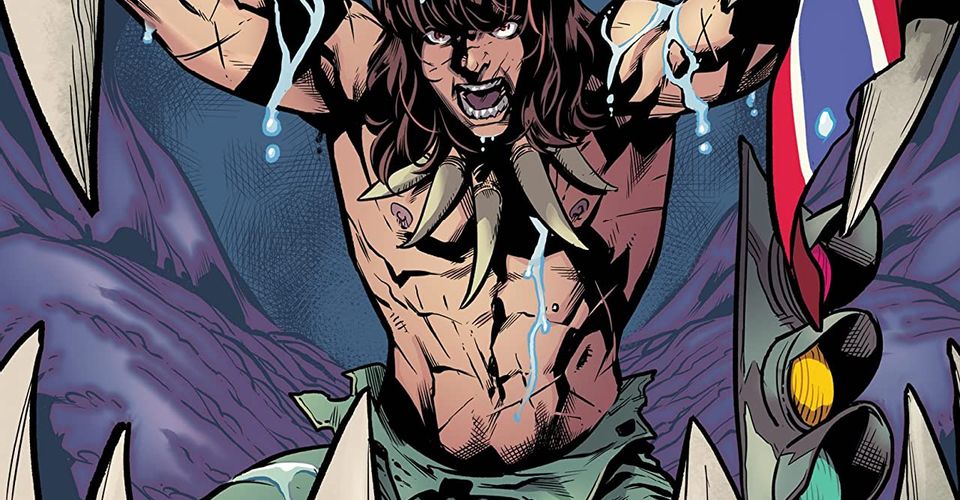 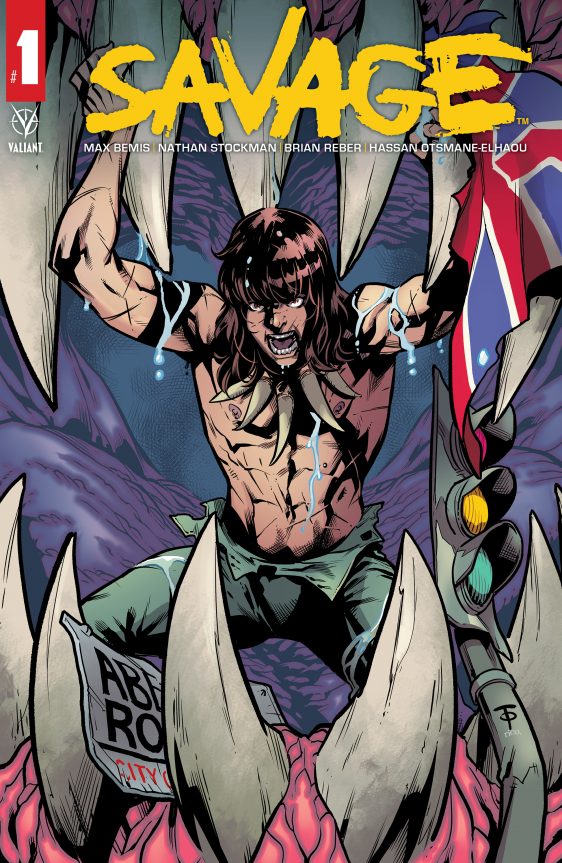 Comics have had a history of telling the story of the Savage in a civilized land. From as far back as Edgar Rice Burroughs iconic Tarzan. The concept of introducing civilization to one who had been raised in the wild has been a common theme. Such is the story Valiant Comics along with writer Max Bemis and artist Nathan Stockman tells in Savage#1. The difference here is the civilization here is the social media crazed, promotional heavy world of today.

The story began when the family Sauvage, Kevin, Ronnie, and Kevin, Jr. (KJ) got stranded on a deserted island that was inhabited by dinosaurs. KJ would eventually become the dinosaur hunter known as Savage.  Which was the name his father was known by when he played Soccer. In truth, it also described how Kevin Jr. needed to be to survive on that island. The creatures there cared not about the family’s situation, they only saw a possible meal. His parents were victims to their hunger. But Savage would not go down as easy. He visited his vengeance upon them. But now what?

As time went on, Savage came to like his life. Even after the death of his parents, hunting the creatures made him feel alive. No time to ponder, to regret, it was survival. Life or death in its purest form. So you could imagine the culture shock when he found himself back in civilization. 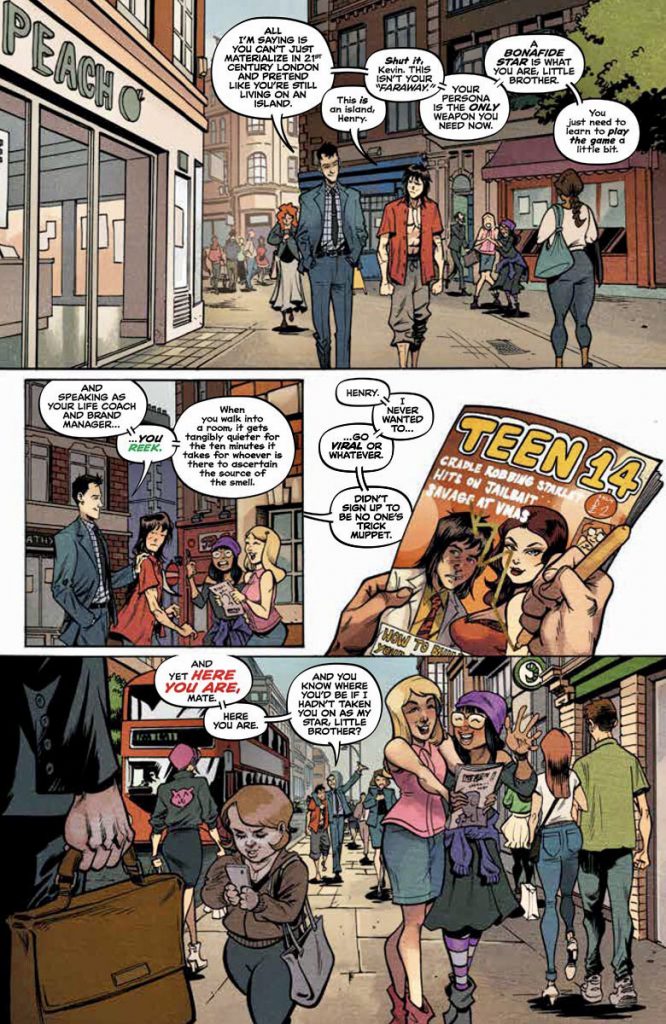 Valiant’s Savage is a nice homage to the classic fish out of water scenario. In truth, it is basically a version of stories like Tarzan, or more recently, Crocodile Dundee. Colorful, flamboyant characters who must adjust when being subjected to a new and to them, strange environment. I have no doubt that both Tarzan or Dundee would have been equally embraced in the new social media crazed society we live in now. And like Kevin, I would imagine they would both prefer to go back to their previous lifestyles. Away from the craziness and the monopolization of their time.

Writer Max Bemis does a great job of capturing how Kevin is forced to cope when subjected to the deluge of attention that social media demands. In fact, considering everything, Kevin is managing very well. Perhaps not to the satisfaction of his brother Henry. He would prefer it if Kevin embraced the game a little more. At least take a shower every now and then. 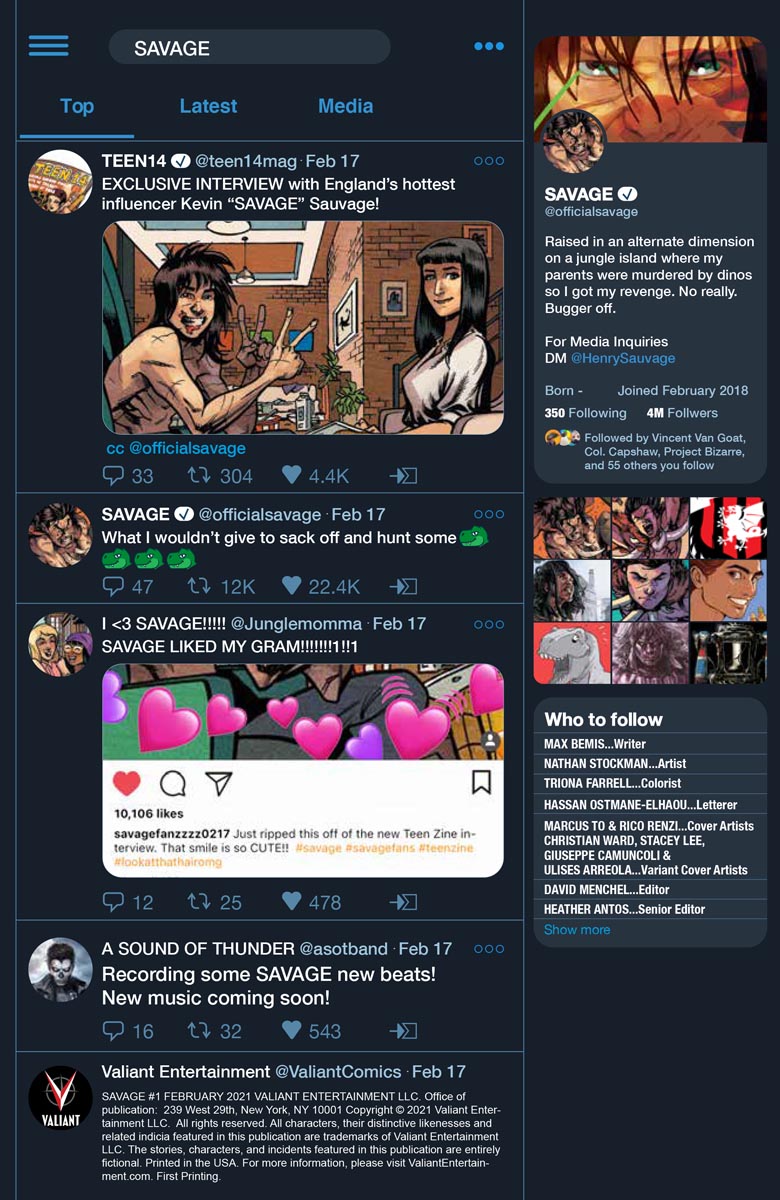 The scattered Social Media Blurbs that Bemis scatters throughout are quite effective to push the story, and to explain the forces that now pull Kevin…or at least his alter-ego Savage! Makes for a unique examination of the social media norms and how dependent people are of them. Well done.

When it comes down to Savage, when you get by all the societal norms, it comes down to the violent interplay between Savage and his Dinosaur adversaries. It is what got Savage his gig, so to speak. When it comes to depicting the conflicts between the creatures and Savage, artist Nathan Stockwell is up to that challenge. Gritty, down and dirty fighting was what was needed and Stockwell delivers that in spades. His creatures are equally well represented with the right dose of ferocity and realism where they LOOK alike they could be a problem. And when you look at the battles Savage and the creatures engage in, is it no wonder the man might smell? At least a little bit? Dino guts probably cling to your hair some. 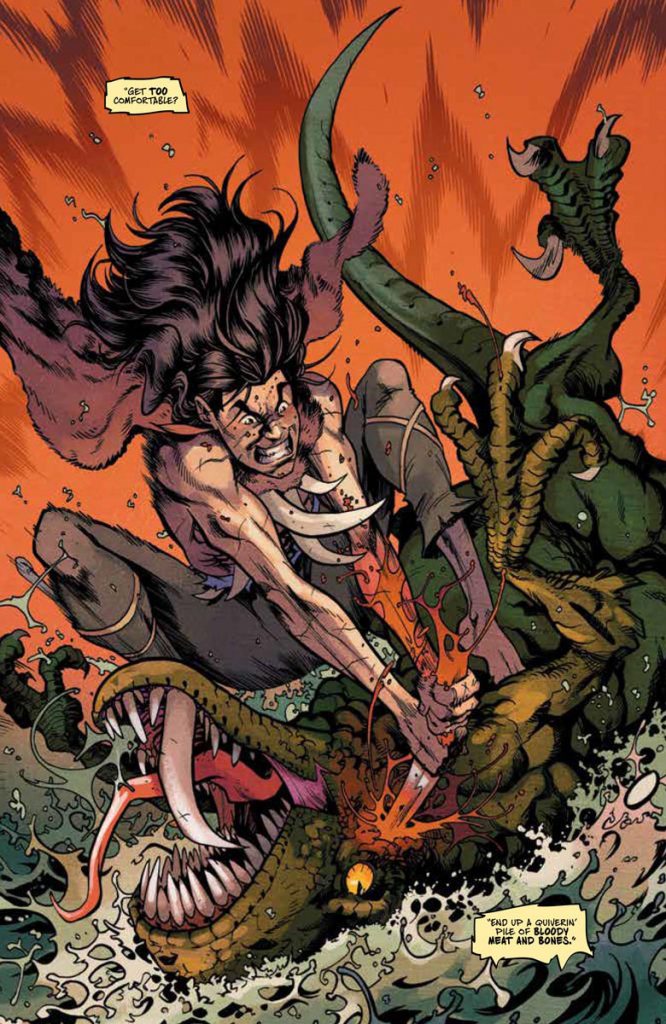 Overall, Savage #1 gets off to a great start. A familiar story told in a unique perspective. Looking forward to what transpires next. Look for Savage#1 by Valiant on February 17th.