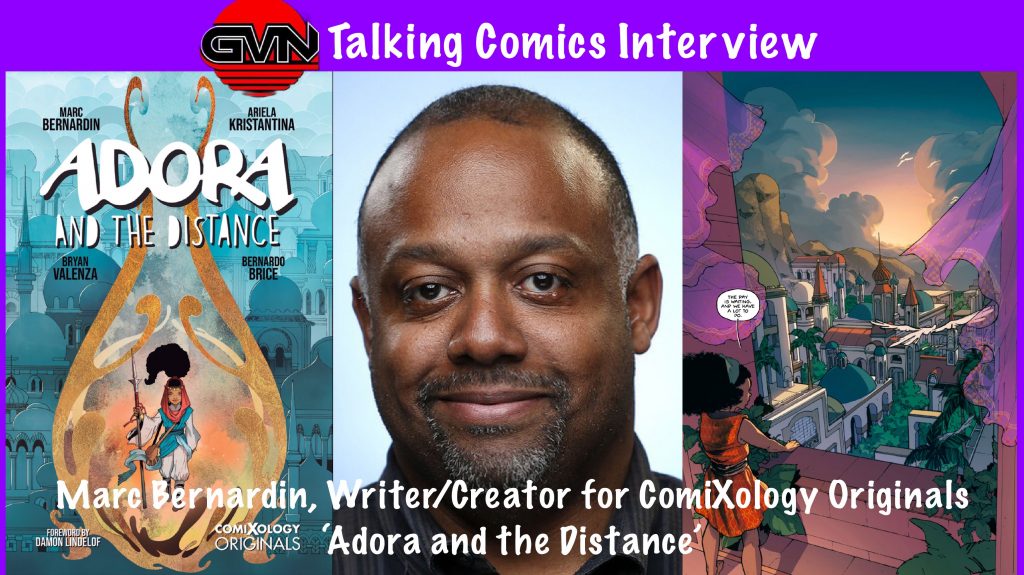 No subject is nearer and dearer to my heart than autism. That is because since my son turned three, the autism spectrum has been a daily part of our lives. To say it has been an easy transition learning everything we needed to know would be a total fabrication. Even now that he is 18 years old, every day is a learning experience, as we continue to grow along with him. So, when I learned that renowned television, comic book, and entertainment writer Marc Bernardin was working on a graphic novel inspired by a Father’s love for his autistic daughter, I was all in. The resulting book, Adora and the Distance, which is coming in June exclusively to comiXology Originals, is a beautiful story about a young girl’s adventure across land and sea. Assisted by her loyal friends, their goal is to protect her from the entity known as “The Distance.” Beautifully drawn by Ariela Kristantina and colored by Bryan Velenza, it explores one possibility of a wonderous journey that could be found in the mind of an autistic child. So it is with great pleasure we welcome writer Marc Bernardin to GVN’s Talking Comic’s Interview.

GVN: Thanks for giving some of your time Marc. Considering all you have going on; I am almost surprised you have any. So, let us start with a little background. What started you on your writing adventure and which authors writing initially inspired you in that endeavor?

MB: Well, the truth is, I write because I can’t draw. The first stories I wanted to tell were comic book stories, as some of the first literature I fell in love with was comic book literature. But I couldn’t make my hands do what I needed them to do for my art to look like I saw in comics, so I stuck to writing. As for which authors, Frank Herbert (Dune), Alexandre Dumas (The Count of Monte Cristo), Robert E. Howard (Conan), and J.R.R. Tolkien (The Hobbit) had permanent spots on my childhood shelves.

GVN: You have written in just about every medium there is, from straight up journalism to television and film to comics. So, in other words, you are my hero. Of course, you had that accomplished by writing for Star Trek Picard. As you have went from each style of writing, what have you been able to earn from each discipline that might have helped you with another?

MB: Journalism gives you speed. When working for a weekly magazine, a daily newspaper, or a minute-by-minute website, you learn to work fast and that you can’t dither with words to your heart’s content. Because at some point, it’s gotta get to the reader, and fast. TV gives you mindfulness. There are a lot of restrictions in TV, most of them budgetary. “Can we produce this?” is a steady question, so learning to paint within those lines are important. And comics gives you strength, because comics writing is maybe the hardest writing you can do. Because you’re also doing math — how many panels on the page, how many balloons in each panel, how many words in each balloon — while also choosing the shots and describing them to the artist, along with the nuts and bolts of “what’s happening and what are the characters saying.” 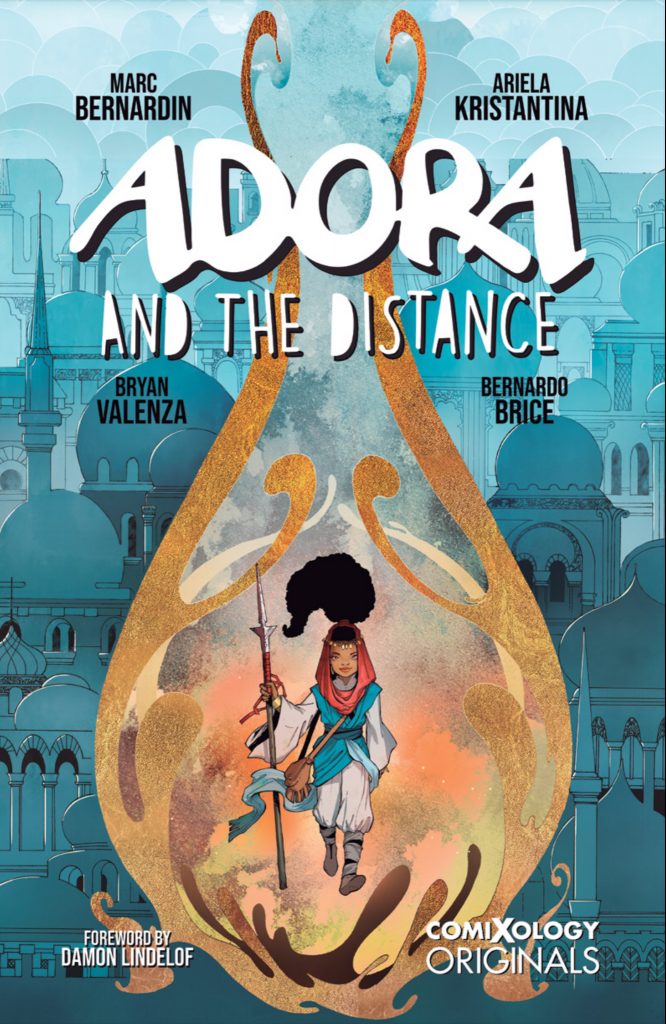 A Quest is Cool

GVN: Great answer and break down. Probably explains why I don’t work for those mediums that require speed. I’m too long winded…even in type. So now that I have geeked out a little, let us talk about Adora and the Distance. As a father of an autistic son, this story has a great significance to me. It was beautiful. My son is 18 years old now. He is non-conversational but is generally always happy. I have always wondered what is going on inside my son’s head. This gives me one possible vision into that space. Once you decided to do this book, how did you decide how to use an adventure to frame this story?

MB: Well, if you look back on that childhood bookshelf I described earlier, I think it’s clear what went into the formation of my writerly DNA. So once I made the decision to not write a story about a parent’s journey raising a child on the spectrum, it was pretty clear it was going to be some kind of adventure narrative. Specifically, a quest. Because quests are cool.

GVN: Well the quest you put Adora on is certainly cool. You describe the phenomena that Adora is being pursued by as “The distance.” Where did this concept come from?

MB: I wanted the quote-unquote antagonist of the book to be scary, but mostly because it’s the unknown. The original title of the book was “Adora and the Big Nothing,” but that wasn’t quite right, because where Adora’s going and what she’s confronting is very much something. “The Distance” sounds big, and for kids, sometimes big is scary.

GVN: So during Adora’s Quest, she is joined by a number of different “protectors.” The characters that go along with Adora are all very intriguing. Each seems to symbolize a different aspect. Mur Rey and the Magic of Music, Antonio and his Stories. Gregoire and his dreams. Esperanza, her closest advisor, etc. How much time did you spend in their development?

MB: It’s not a deep-deep secret, because I mention them in the book’s afterward, but those characters are based on figures from the TV shows my daughter watched as a very little girl. But it was a matter of advancing the archetypes at the center of those characters. Adding some heft and weight, an edge that would make them appropriate guardians on a journey, rather than comic relief. 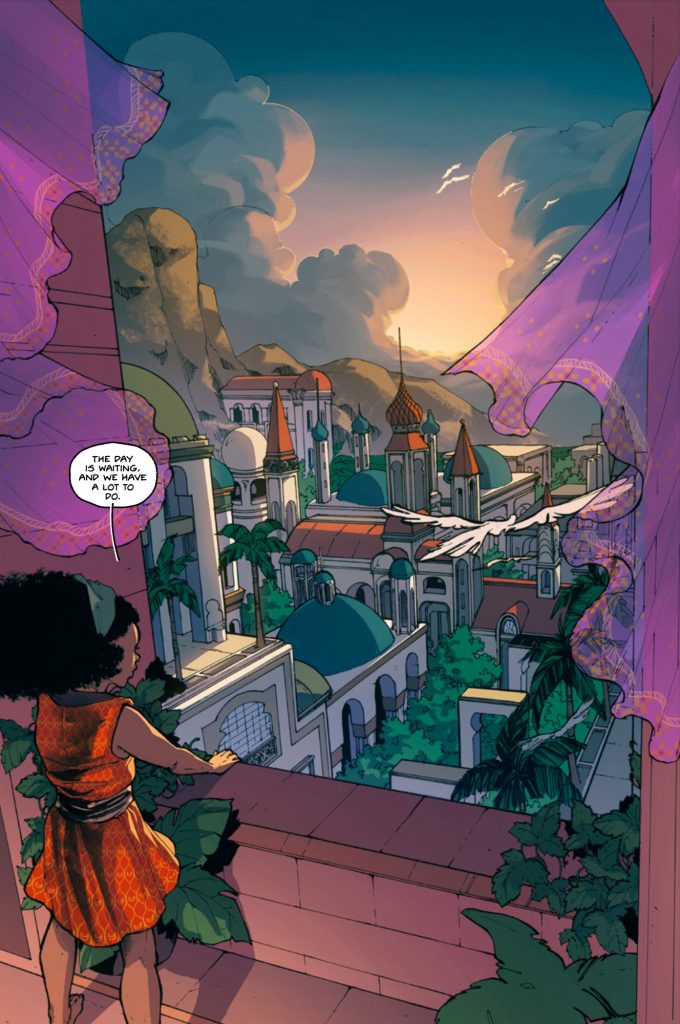 GVN: Artist Ariela Kristantina’s work here is beautiful, as is the color work of Bryan Valenza. How did you get hooked up with these talented artists and as the book progressed, did their work surprise you in anyway?

MB: I’d come across Ariela’s portfolio years back, when I was looking for someone to illustrate an arc of Genius, another comic I write — with Adam Freeman — for Top Cow/Image. The timing didn’t work out then, but when the chance to do Adora at Comixology, her name was at the top of the list. She has a precise style, but it still leaves room for a ton of emotion, which was crucial for a book like this. It needed to be accessible to audiences that might be coming to comics for the first time. Once she signed on, Ariela recommended Bryan, who she’s worked with a lot in the past, and he just brought the pages to life.

GVN: Their collaboration most certainly bring the journey to life.  As a parent who is obviously well versed in your child’s life. What do you hope those unfamiliar with the Autistic spectrum can take from your book? I see it as a device to intellectualize things from the child’s perspective. At least, to realize there is more going on than what we see from the outside.

MB: Mostly, I’m hoping that it offers people with loved ones on the spectrum a slightly different perspective on what might be going on inside those gardens we can’t peek into. And I’m praying that people who have no experience with autism at all will have a bit more empathy for us spectrumites.

GVN: Amen to that. Of course, being a busy creator, you have more on your plate. You are in the middle of a Kickstarter on a short film project, Splinter. Please tell our fans about this project and where they can find it to help support the campaign.

MB: I’ve long held this dream of being a director — it seemed like the moving picture was another way to compensate for the fact that I can’t draw. And so I’m trying to make that dream come true. Splinter’s a short film, a thriller modeled a bit on the classic Twilight Zone, about a kid with power and the people trying to keep that power bottled up so it doesn’t destroy the world. So, yeah, a tiny little thing! If that sounds cool and like something you’d want to see, the easiest way is to hit https://www.kickstarter.com/projects/splintershort/splinter-a-short-thriller — as little as $25 will get you access to the film once it’s finished.

GVN: Thank you so much for your time, Marc. Truth be known I could probably talk about our kids for a while and the film does sound pretty cool. Best of luck on your book and your Kickstarter and we will be following both with great interest.

MB: Thanks! This was a fun chat!