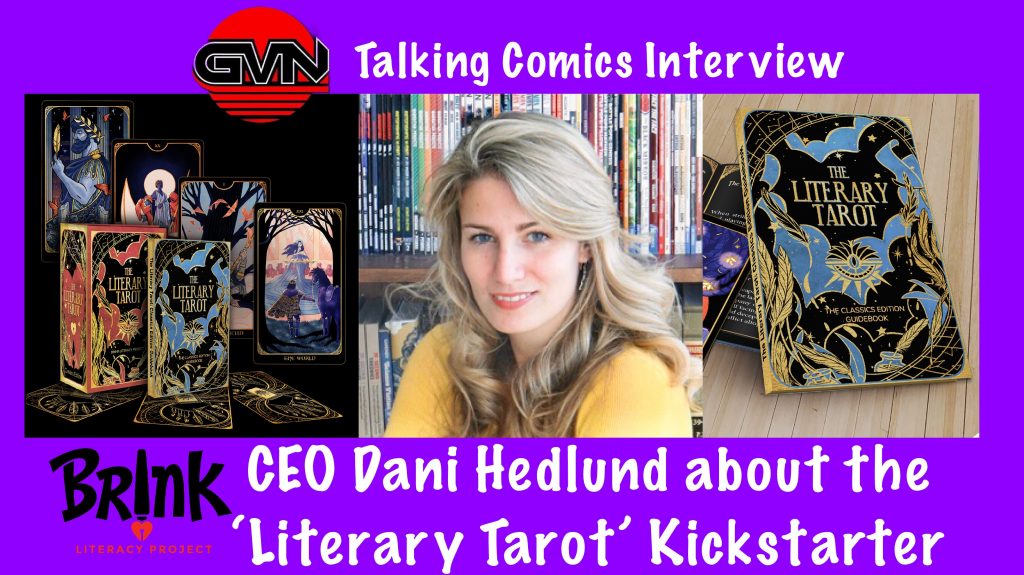 Part of the responsibility of running a non-profit organization requires that you create projects to help fund it. Some are more exciting than others. In this particular case, The Brink Literacy Project has outdone themselves by combining the world of Tarot Cards with some of the great literary works. To accomplish this, CEO Dani Hedlund has reached out to some of the most renown writer and cartoonists in this business. Together, they have created the Literary Tarot Set. This project launches a Kickstarter Campaign on June 1st that will run throughout the month. So, it is with great pleasure that we welcome Brink Literacy Project CEO Dani Hedlund to GVN’s Talking Comics Interview.

GVN: Thank you so much for giving us some of your time Dani. I know that time is at a premium as busy as you no doubt are. So let’s delve right into this exciting project. First off, tell us a bit about Brink Literacy Project. What are its goals and how did the Literary Tarot’s campaign get its start?

DH: Brink is this mad little storytelling nonprofit that I started as a doe-eyed nineteen-year-old (crazy, I know!). We are united around the idea that stories have the power to change the world. Because of that,  we do everything we can to amplify and nurture diverse, emerging voices. In addition to taking those stories to the populations who need them most (from low-income students to maximum-security prisons). Unfortunately for us, COVID really tossed a spanner into the works. With in-person events suddenly impossible and funding being diverted to fight the pandemic, things were looking a little dire for our nonprofit work.

But as any great tarot reader will tell you, we always have the power to reshape our futures. And that’s just what this deck aims to do. Teaming up with some of the greatest storytellers alive (Margaret Atwood, Mark Millar, Roxane Gay, Kelly Sue DeConnick, and Jonathan Hickman, just to list a few) we are creating a tarot deck that recreates each card through the lens of a literary classic. All proceeds from the sale of this beauty will go to support our nonprofit work, fighting to increase literacy rates and foster a love of stories worldwide! 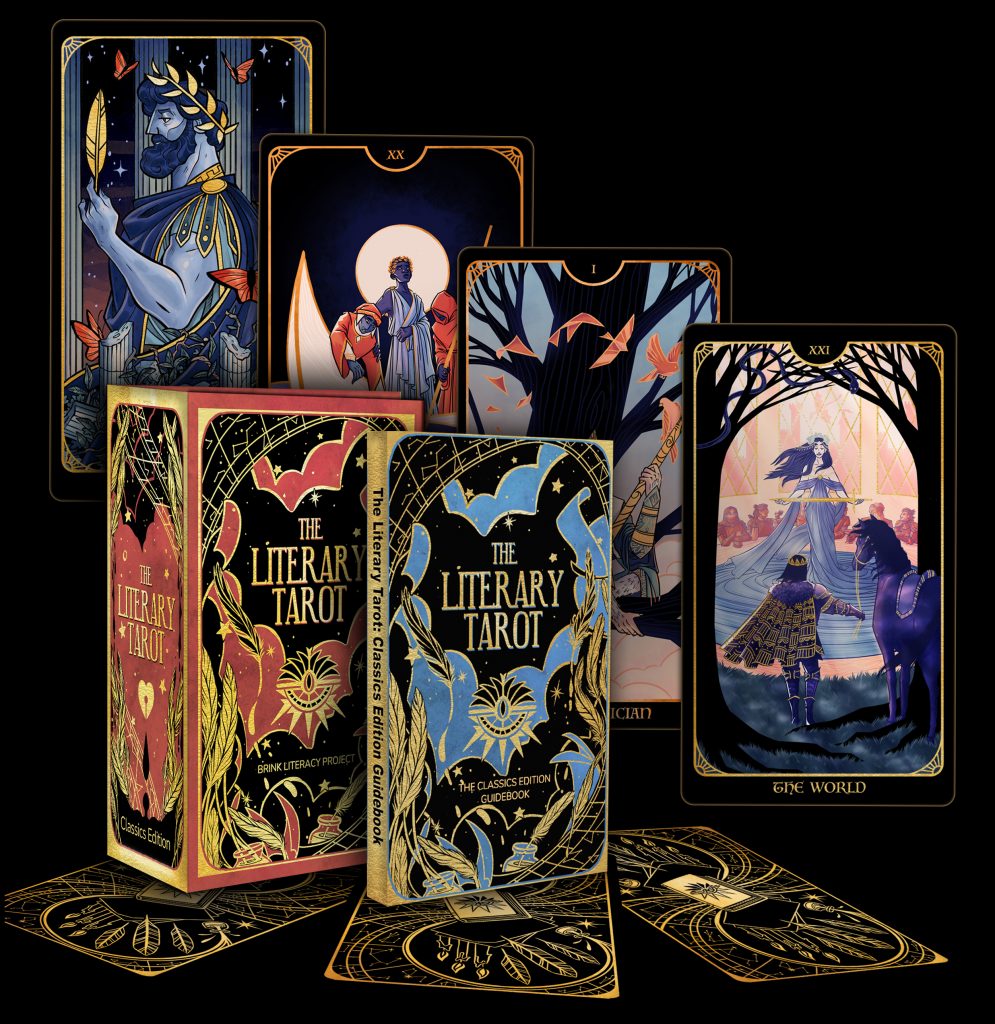 GVN: It is a really great idea. But that being said, I am not embarrassed to admit that I really have no knowledge of tarot cards or their reading. Why did you decide to use Tarot Cards and what will those (like me) who are unfamiliar, get from this creative use of them? (Just the literary backdrops of each would invite my attention.)

DH: Six months ago, I was right there with you, Martin! I loved the idea of recreating classic literature in such a visual way, but I was really skeptical of the actual “tarot bit.” But I’ve got to say, through the hundreds (oh god, thousands?) of hours manning this project. And added with the hours meeting with our authors and brainstorming with our tarot experts.  Not to mention art directing each and every card—my skepticism started to crack. You see, tarot combines all the things we love about books. When we sit down with a moving story, we identify with a character, think critically about how they might teach us something about our own lives. That’s exactly what tarot does.

So for everyone out there who, like me, is new to the world of tarot and very attached to their skeptical tendencies, I hope you will, at worst, find joy in seeing how our favorite authors reframe beloved classics. At best, maybe you feel a connection when they read the cards. Feeling that spark of magic that a good book creates. Almost like getting to peer into another world, one that teaches us as much about ourselves as the characters we come to love.

GVN: Well you have me convinced. Speaking of the Tarot Cards, you have recruited a virtual who’s who of talent for this project. How in the world were you able to recruit such an impressive and expansive collection of creators? Starting out, did you have an initial list of who you wanted to be involved? Or, because of the apparent enthusiasm the project has created, did you have to turn anyone down? Basically because you filled all your spaces?

DH: I ask myself this question every time I look at our roster. Like, how did we pull this off?! But really, the answer is simple: we had a lot of help. Our nonprofit, despite being almost entirely volunteer-run and by no means brimming with financial resources, does have something in spades: a community of authors that care about our mission. They also have big old hearts (and really talented voices!) Thus, when we concocted this mad idea, I called up some of our favorite writers (Lev Grossman, Kelly Sue DeConnick, Charlie Jane Anders, Benjamin Percy, and Rebecca Roanhorse) and said “Hey, we have a crazy idea. Any chance you’re down?” What I didn’t anticipate was just how down they’d be.

These amazing authors didn’t just come on to pair cards, they got excited. And that excitement was contagious. The celebrity phone tree was activated. “Hey, this nonprofit I love is doing a big literary tarot deck as a fundraiser. I know you love [INSERT CLASSIC]. Wanna pair it?” And you know what, Martin, nearly everyone did. Marjorie Liu, Mark Millar, Leigh Bardugo, Tini Howard, G. Willow Wilson, Jonathan Hickman, Kieron Gillen…the list goes on and on. And the great thing was: people weren’t just excited about doing something great for charity, they were excited about the process. They were so keen to dig into stories they love, to chat about the cool themes, to watch the art come to life. If our readers have half as much fun as we did making this deck, I think we’ll make something really special. 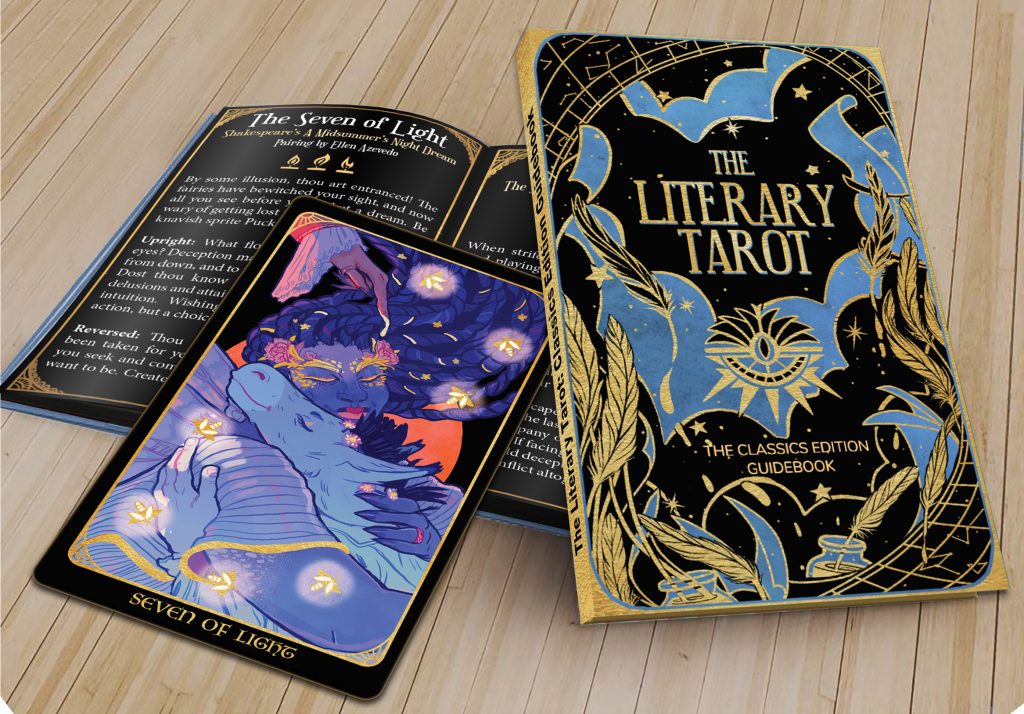 GVN: Just by looking at initial sneak peek of the set, I think you will be proven correct. So to get this party started, you are launching a Kickstarter campaign for this project June 1st. Experience has proven this is a great way to not only fund a project but to generate public excitement for the campaign and the item in question. Is this your first Kickstarter? And if not, what have you planned for as far as the Campaign goes Tier wise, stretch goals, etc.? (I only ask that because many times, campaigns have proven so popular that the stretch goals are passed up in very little time. At that point, you have a campaign with weeks to go and creators scrambling for other things to keep momentum going) Actually, that’s not such a bad thing.

DH: This is not our first rodeo! We’ve run several Kickstarters in the past for our triannual literary anthology, F(r)iction (which is how we know a lot of the stellar celebs attached), but this will be by far the largest thing we’ve ever embarked on. And we’re ready to go big with our campaign. The tiers are swanky (because what is a literary themed deck without a cool book box to store it in?) and include a lot of literary goodies (a whole issue of F(r)iction about Arcana with content from some of the best fantasy authors around!), and everything about the deck is gonna be gold foiled within an inch of its life.

For stretch goals, we’ll be swanking out the deck, adding in swag, and even doing something so cool I’m not even allowed to talk about it (but it’s going to be big, both metaphorically and literally!). We also have some fun ways to incorporate our backers into the creation process. Again, I’m sworn to secrecy…but it’s to do with the Lovers card…and just how much lovin’ is going to be going on…

GVN: Well that sounds very exciting. And just mysterious enough to intrigue. Well played, Miss Hedlund. Well Played. So when all is said and done, and this campaign is successful as I imagine it will be, do you have any plans for another such a project in the future? Perhaps in another creative format? What that would be I have no idea. That’s why we have idea folks like you.😏

DH: That question has been bouncing around my head for months now. Authors are already calling dibs on cards for other hypothetical literary themes, my art team is tossing me wild designs they dig, hell, I’m starting to stare at my old Greek and Norse mythology books rather hungrily… But for now, I’m not sure what our future might hold. But I can tell you I just drew The Magician Card from the literary tarot deck…and that probably means something…

GVN: Now you have piqued MY interest. I am a big fan of Norse mythology (probably because of Jack Kirby and Thor).  Thank you so much for your time, Dani and we will be following this Kickstarter campaign and Brink Literacy Project with great interest.

DH: Thanks Martin! It was a pleasure!

The Literary Tarot Campaign launched on June 1st. You can check it out here.