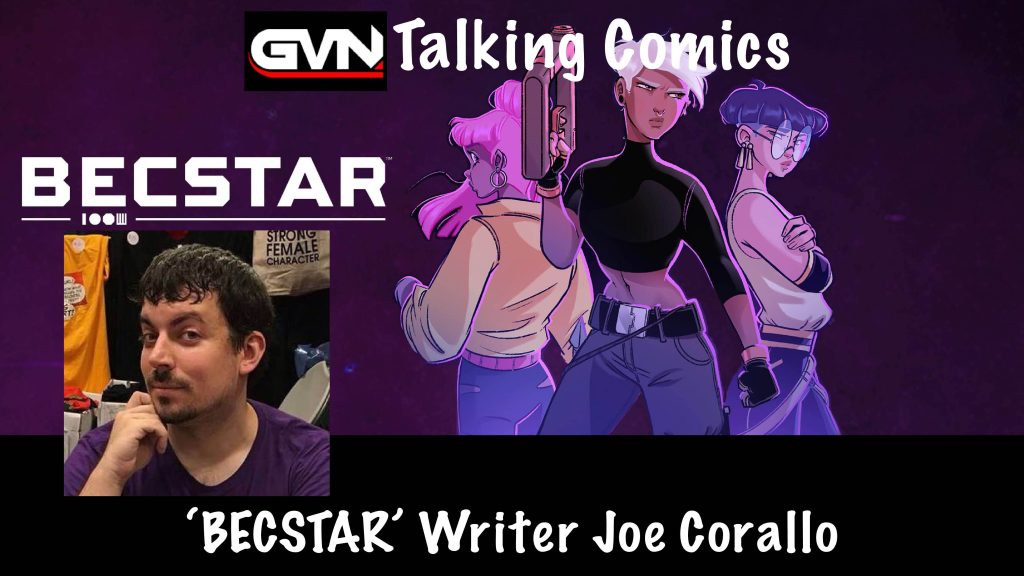 We recently reviewed Mad Cave’s upcoming new book Becstar. During our look inside the 1st issue, we acknowledged the wonderful work done by the team of writer Joe Corallo and artist Lorenzo Colangeli.   After seeing Joe’s work and his kick ass female characters, we knew we needed to find out what how he got started and how Becstar came to be. So let’s welcome Joe Corallo to GVN’s Talking Comics. Thanks for giving us a bit of your time, Joe.

GVN: Well because I am a creature of habit, and because our readers are always interested in how creators got their start, let’s start at the beginning. When did you take an interest in writing and were comics always front and center of that ambition?

JC: I had started really getting into creating my own stories back in 3rd grade when a friend of mine, Brian, and I started coming up with Megaman and Sonic the Hedgehog fanfiction. Next, I briefly used to attempt to draw my own character designs for it, but quickly learned I was not artistically inclined.

At the time, I was reading the Sonic the Hedgehog comics and expanded into Marvel and DC by high school, so comics were always a focus. I took creative writing courses in high school and college. So for a while, it was more writing short prose stories than anything else. I tried working on some tv pilot screenplay ideas briefly in and around college as well, but by 2010 the main focus was on comics.

GVN: So during your career, you have been both an editor and writer.  Working on both the journalism side (ComicMix.com) and the comic book side. That includes titles like She Said Destroy and the upcoming BECSTAR. What have you learned from each job that has been instructive for the other?

JC: Comics journalism certainly helped me develop as an editor. I think the biggest thing you learn by being both a writer and an editor is that while there is some overlap in those skill sets, overall they are very different. And just because you have editing skills doesn’t mean you can or should edit your own work as a writer. If you’re a writer and want to self publish your work or work with a publisher that doesn’t assign an editor to you, you need to hire an editor to work with you. Don’t take a shortcut there; it’ll show in your work. 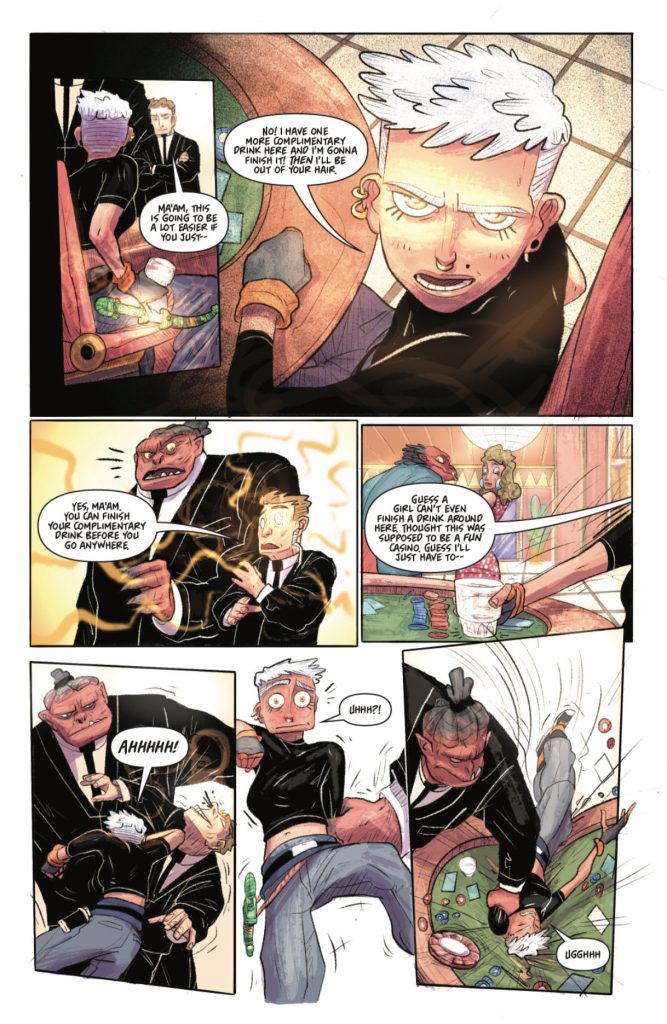 GVN: When it comes to your new title, where did the story for BECSTAR come from and did you have any preconceived ideas for the premise?

JC: The initial story idea came from Mark London and Mad Cave Studios. They had an outline for the idea that was sent my way. And then I got to make changes and have fun with it. Honestly, I was given a lot of freedom to craft the story and fit it more into my personal sensibilities and inspirations. It was always meant to have a bit of a 90’s anime flare with some elements of properties like Cowboy Bebop thrown in. This is what originally attracted me to the project. However, I think you’ll see as the story goes along that it goes in some wildly different directions. There are absolutely elements of other properties I’ve worked on like She Said Destroy and Kim & Kim in the works here too.

GVN: I even saw a nod to Tolkien (with the character’s reaction to the Clairvoyance Rod) and perhaps even Lucas. (See Becstar manipulate the Casino security…for a minute…”Yes Ma’am, You can finish your complimentary drink before you go anywhere.” The Luck Dagger has a powerful effect on the weak minded.) But I digress… You are working with artist Lorenzo Colangeli. How has that collaboration been and did his efforts reshape how you perceived your story?

JC: Getting to work with Lorenzo has been such a joy! We were so lucky to find him through one of the Platform Comics contests, so if you’re ever wondering if people look at those kinds of things to find talent for projects, we absolutely do. He’s far too humble and an excellent communicator. I wasn’t entirely sure what the characters would look like, or much of the world exactly for that matter, and just based off my notes he created a whole world that I’ve been excited to pen every issue for. I can honestly say there weren’t any real changes in any of the designs; he nailed it every time. 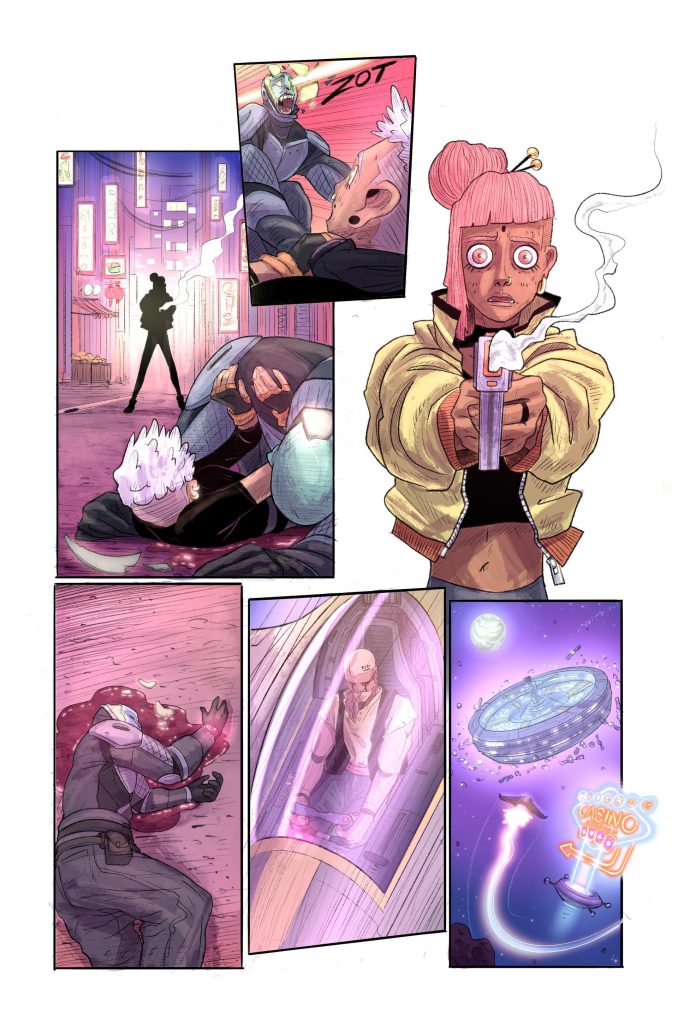 GVN: Your main characters BECSTAR, Sally and Paprika are all strong willed, kick ass female characters. Was this your intention from the start and did you base any of these characters on people you know?

JC: From the start I knew Becstar and Sally were going to be like that. Paprika took a little more time to develop. I was rewatching the Sailor Moon movies around this time so there’s some influence from there as well as my work on Kim & Kim. The Kim D. and9 Kim Q. dynamic being something I was thinking about as I was crafting this story. And while I wouldn’t say any of these characters are based exactly on people I know, Becstar’s experiences are based on my own. And I imagine many other people’s in so far as she’s dealing with unexpected changes in her life.

I think for many of us, the people who are important to us in our lives today aren’t the people we may have thought would be important to us 5, 10, 20 years ago. In the same vein, part of us may think of what could have been or what if things were different. That’s a lot of what’s going on in Becstar’s life; lost friendships from years ago and learning to come to terms with the life we have now.

GVN: Great point and I can see that perspective in action in BECSTAR’s story. Thank you so much for your time, Joe. For my final question, I am bound to frame it in the hypothetical realm. So here goes. BECSTAR is well received. So much so that you are given an opportunity to adapt it to either an animated feature or a live action film. Which would you prefer and who could you see playing BECSTAR or doing the voice for your spitfire character?

JC: Of course! Happy to chat about Becstar. While I haven’t even considered it prior to this question, I gave it a little thought and I’d definitely prefer an animated feature since Lorenzo did such a good job creating this eccentric, colorful world. And I’d be interested ain someone like Jameela Jamil playing Becstar. I loved her in The Good Place and I think seeing her stretch her range in a role like this could be really fun. Maybe Mara Wilson as Sally and Pom Klementieff as Paprika now that you got me thinking about it.

GVN: That’s some great casting. Thanks again, Joe. We are looking forward to the release of BECSTAR and seeing where your story goes.

JC: No problem! Thank you for taking the time to interview me.