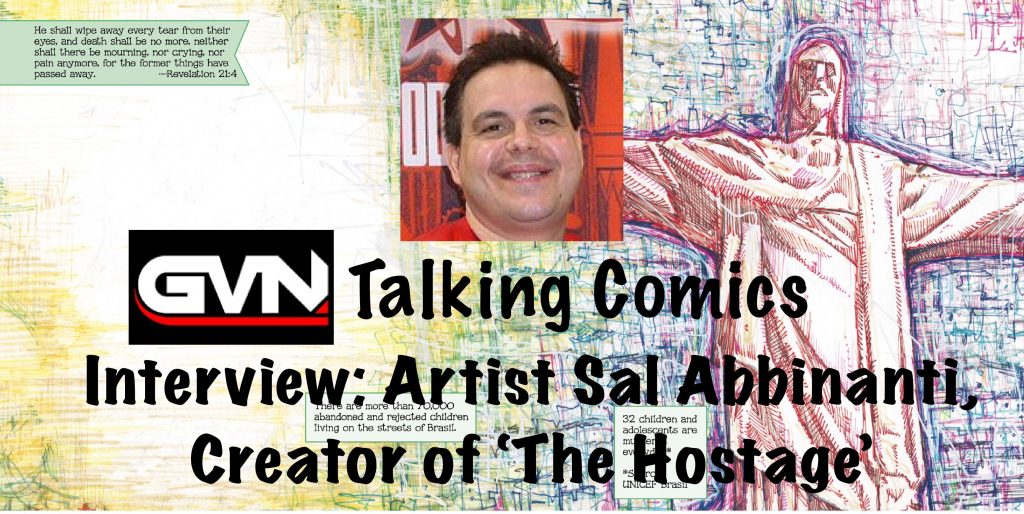 Sal Abbinanti has had a great career thus far. As art representative for such artists as Alex Ross and Bill Sienkiewicz, he has been in the forefront of the comic art world. But Sal is an artist in his own right. And for the past number of years, he has been working on his first graphic novel called The Hostage.

Based in no small part on a trip the artist made to Brazil, The Hostage tells the tale of a group of street kids who are abandoned by society. Dying every day from poverty and gang violence, the kids join together and summon a mystical spirit—THE HOSTAGE—who will protect them and avenge the deaths of their friends.

The Kickstarter for Sal’s book has recently opened. So it is our distinct pleasure to welcome Sal Abbinanti to GVN’s Talking Comics. Thanks for giving us a few moments, Sal.

GVN: You have been around great artists in your career. Thus it should be no surprise that you yourself are so talented artistically. When did you realize that art was your passion and whose work inspired you in your own work?

SA: Growing up I was a huge Marvel fan, Jack Kirby, John Buscema, Gene Colan, & Gil Kane were my heroes. Jack Kirby, in my opinion, was one of the greatest artists of the 20th century. He taught us that comics should be a product of your imagination. His work had a profound affect on me and my approach as an artist. I knew the moment I saw Thor #206 on the ‘spin rack’ at Stoyas drug store in Chicago that I wanted to draw comics. It was an instant escape, I got into a lot of trouble as a kid so needless to say drawing saved my life. Having a place to channel your creativity is everything. 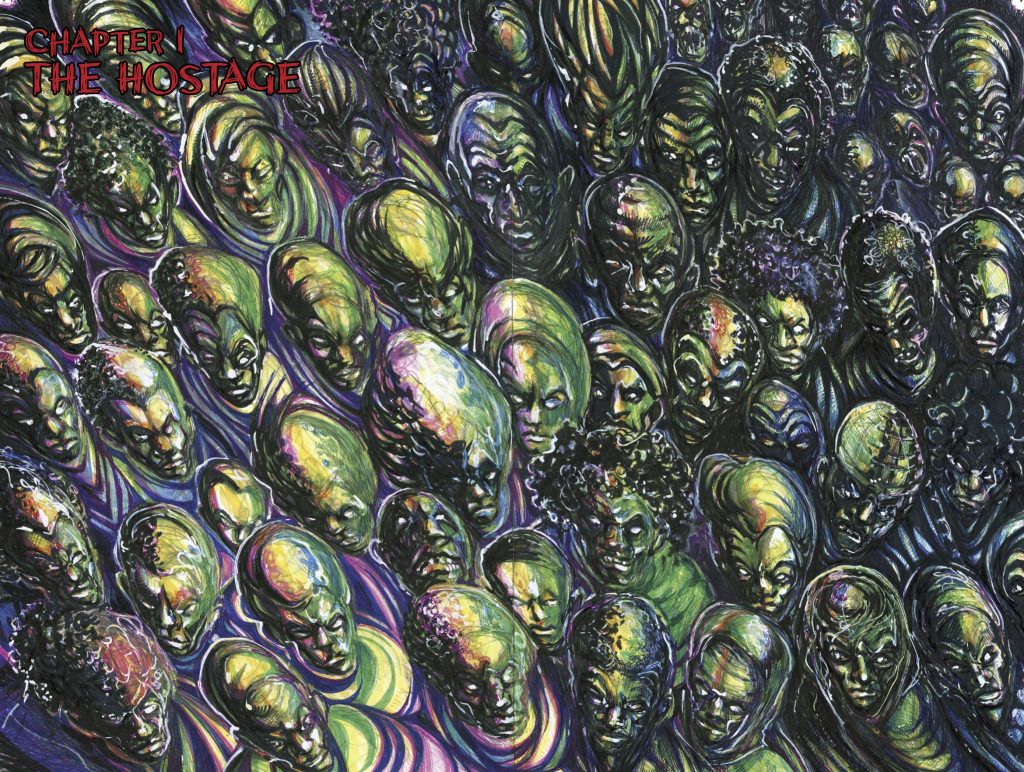 GVN: You and I share a brain on your artist choices. Each and everyone a personal favorite. You have been working on The Hostage for some time, based on a trip you made to Brazil (as I understand it). Can you tell us how your visit helped to shape your story?

SA: Some things in life you can’t unsee and very few experiences are life changing. The beauty of the country and people of Brasil I found tremendously alluring. The smell of the soil and setting of Rio De Janeiro was like something out of a dream, yet as I explored Rio further, what I found spoke to me forever. The homeless children living in the streets were everywhere. Young children under the age of 10 sleeping on the sidewalks living in filth. The look in their eyes pierced my soul. When I returned to the U.S. I was never the same. So I knew as an artist I needed to produce something that was personal and not just another comic with guys in capes. 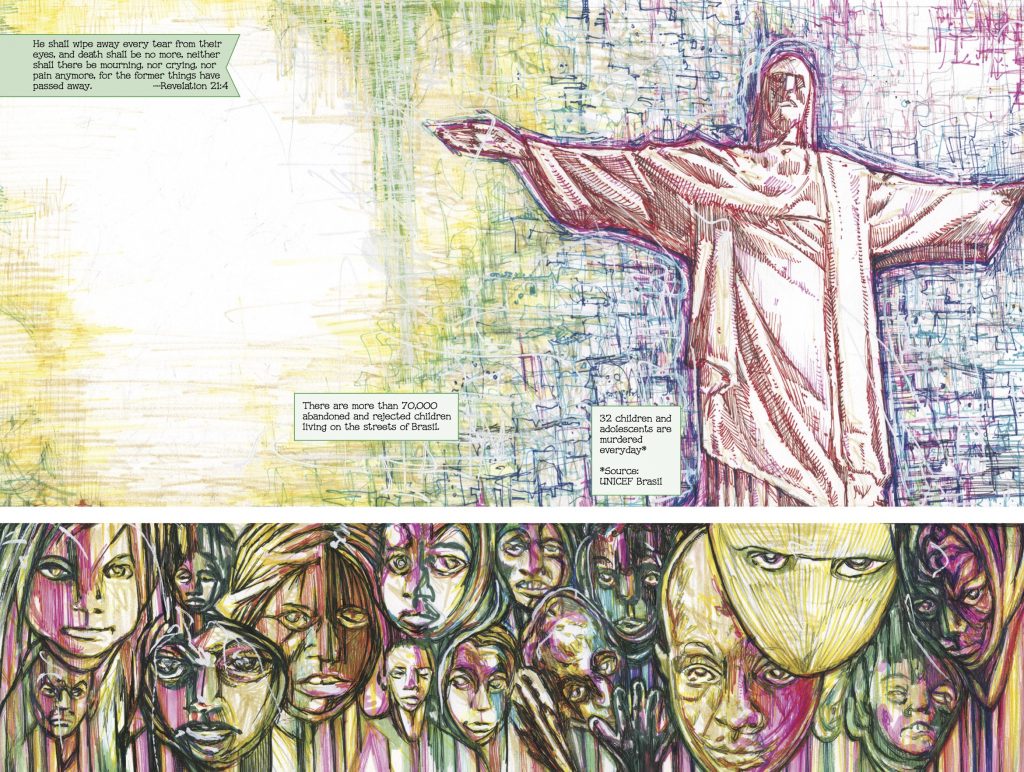 GVN: I could certainly see how such an experience could shape your world views as well as your art. Speaking of which, your artwork on the Hostage is EXTREMELY powerful. As an artist myself, I find myself asking, What medium are you using? At times it looks like watercolor, others like color pencil. It makes quite a statement.

SA: Thank you very much for the kind words. I believe in using whatever gets you there. I use Bic Pens, Sharpies, Watercolor paints, white out pens, inks, colored pencils. Bic Pens and sharpies remind me of when we drew in our notebooks as kids in school and our work was just for the fun of it. Markers and pens help boost the energy in my line work. 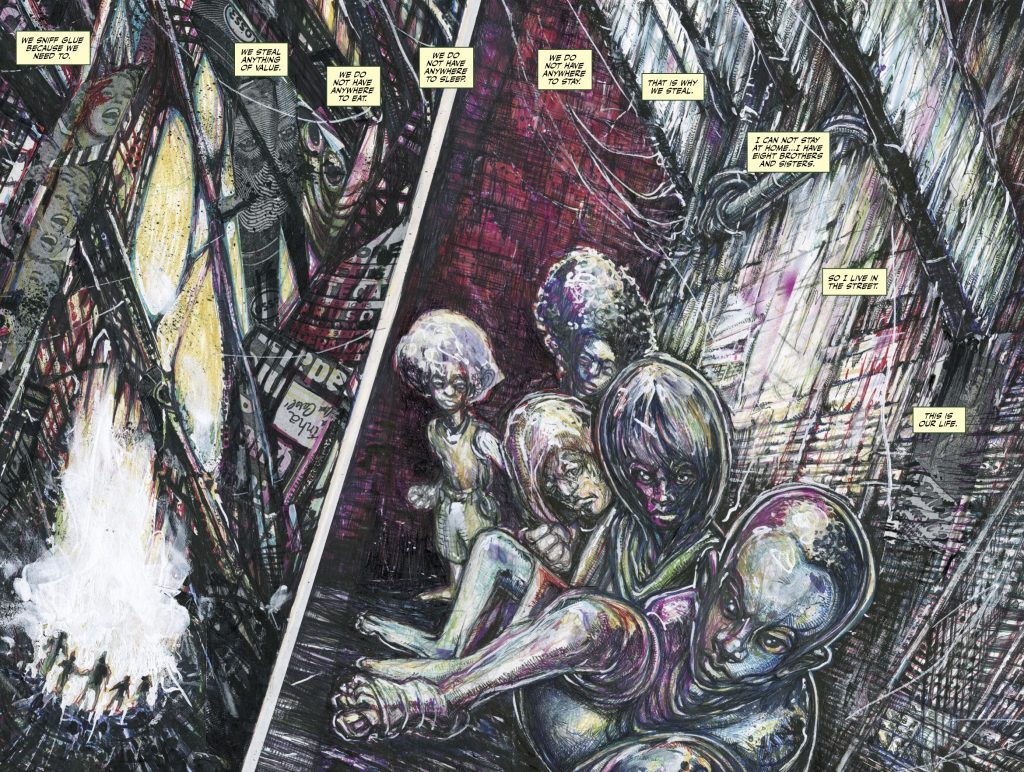 GVN: It really comes through. I also like that you are not tied down to a certain media. Art should be expressive. The art in the Hostage is both vibrant, somber, and at times leaning toward the Macabre. That is quite a dichotomy of emotions to evoke and your work does it quite well. How did you develop your particular artistic style?

SA: I wanted to draw like an artist that Marvel or DC would hire and I spent a lot of time and effort trying to get a break from any publisher. I was rejected by everybody, they found my work ”too disturbing”. So I finally knew that I was either going to do something else as an artist or self publish.

My style came from just drawing a lot as a kid as an escape. Growing up on lots of black and white monster and James Cagney movies also inspired me a lot as well as John Buscema’s run on Conan. When I saw Jack Kirby’s run on New Gods, I knew I was home.

GVN: Absolutely! I was amazed to learn that John Buscema really didn’t even LIKE drawing books that involved a lot of superheroes (although you couldn’t tell it by the results). He preferred doing Thor (because of Asgard) and especially Conan. But I digress. Let’s get back to The Hostage.

You are starting a new Kickstarter for your book. How different is it to be helping to promote your own work as opposed to the great artists your work with? Have Alex Ross or Bill Sienkiewicz been supportive of your project or have they offered any advice?

SA: It’s a lot of fun to be out here promoting my own work.  No one is going to care or go to bat for your work as much as you will yourself. Alex and Bill have always been tremendously supportive. Alex has been a huge source of advice and feedback on ‘The Hostage’.  Bill has been with me every step of the way and never preached, just always told me to surprise myself with my approach and choice of compositions. I’m happier than a puppy with two Peters to be out here finally getting the word out for a project that’s extremely personal and important to me. 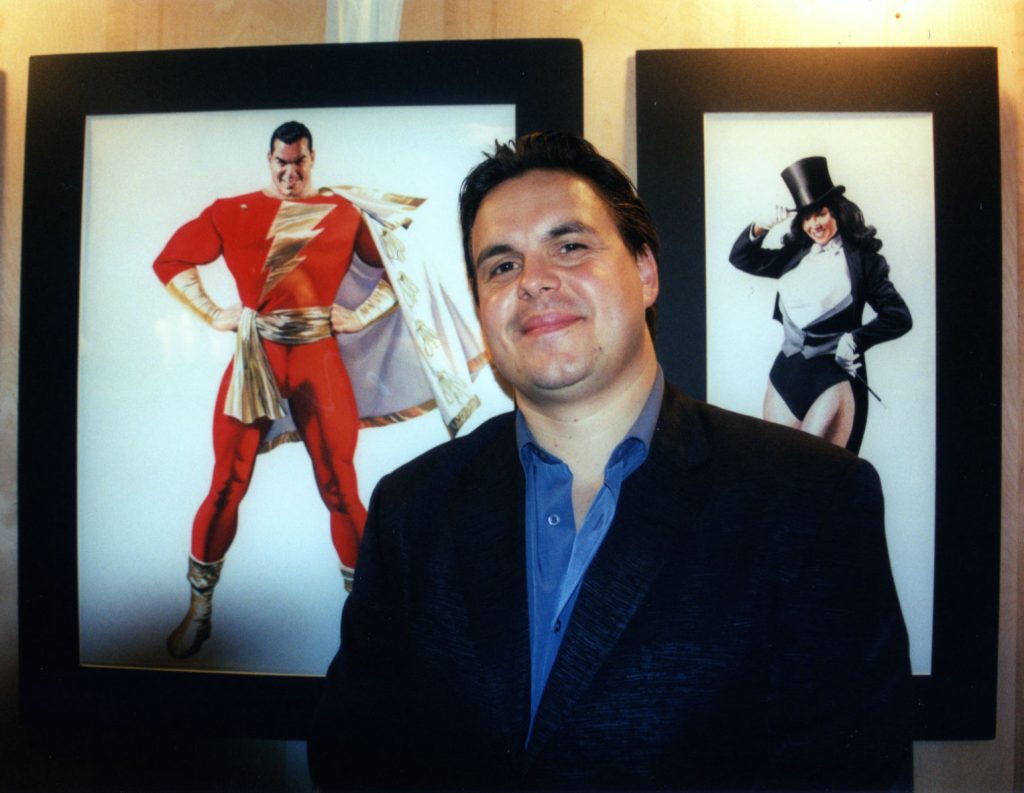 GVN: Speaking of Alex and Bill, I can’t imagine a more intimidating thing than representing such high profile talent while also working on your own projects. You are obviously very secure in your own talent (as you should be). I confess myself that might have been a hard row to hoe. Have you had any hesitations or doubts during the time you have been working on The Hostage?

SA: No one in the business is ever really gonna wrap their arms around you and give you a big kiss.  You better be firm in your resolve and do it because you want to do it.  Or in my case because you have to do it.  Wanting to be an artist is like running off and joining the circus.  The circus doesn’t need you, you need the circus.  I feel I have something to offer or I wouldn’t waste everyone’s time.

GVN: Thank you so much for agreeing to talk to us, Sal. A final question: If your book is accepted as positively as I would suspect, do you have any ideas for a follow up? Would that be a possibility or have you thought that far ahead?

SA: I hope so, right now I just want readers to give my book a shot.  I’m confident in one thing, love it or hate it, it isn’t like anything comic fans have seen before.

The Hostage is now on Kickstarter. Visit the project and see if you don’t agree with Sal that his book is unlike anything you’ve ever seen. 🖖🏻