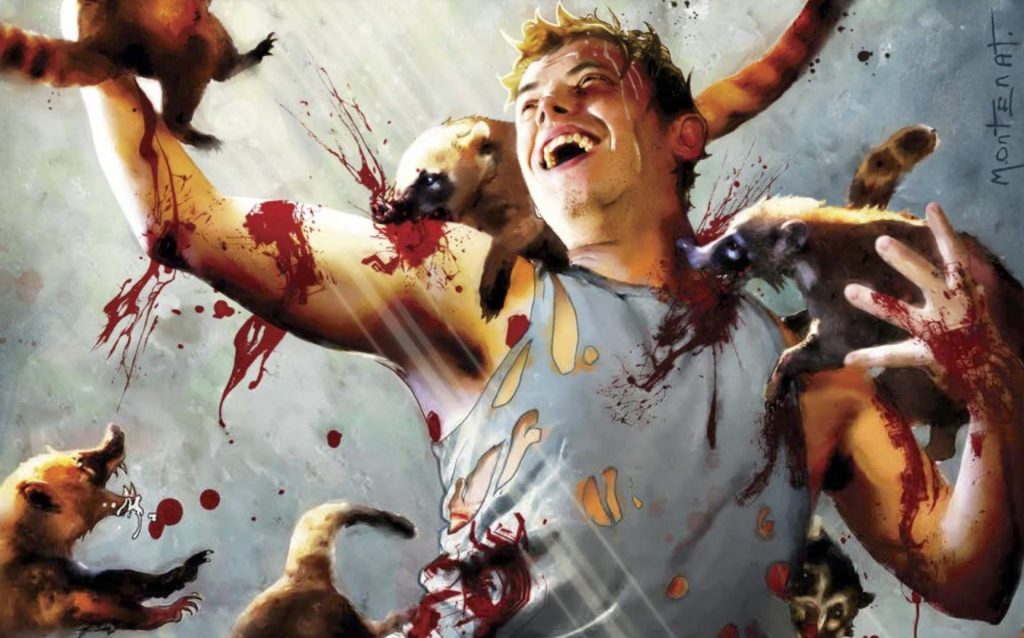 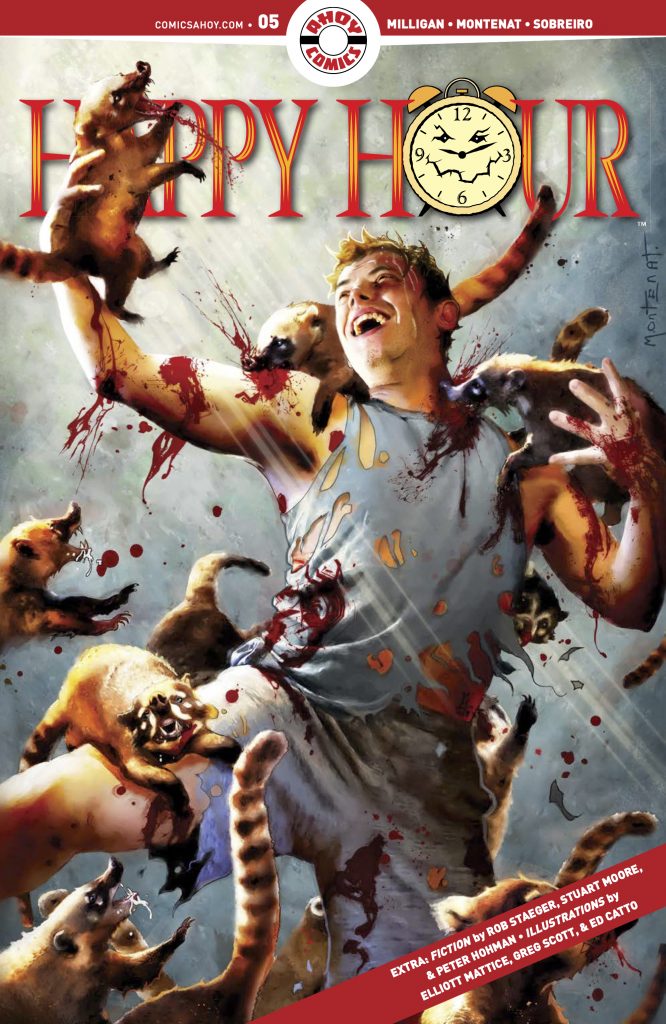 When we last left our emotionally confused couple, Kim and Jerry had finally arrived at their intended destination. Cohen’s Misery Readjustment Center. What they realized was Cohen’s was just the other side of the same coin. Happiness Readjustment, Misery Readjustment it was just another way of being unsure, confused, and in the end still unhappy. Hooray.

And speaking of the Happiness Readjustment, a former charter member of that club had been brought back for a booster. Sullivan, who used to be a member of the Security team, had the audacity to be upset when his wife passed away. None of that now, None of  THAT! So once again, he was brought in to have his frown turned upside down. However, Sullivan wasn’t having that either. He had been on that train and it lead nowhere. So do your worst, or your best…it didn’t matter. So in other words, he was just the kind of miserable SOB the Cohen people coveted. 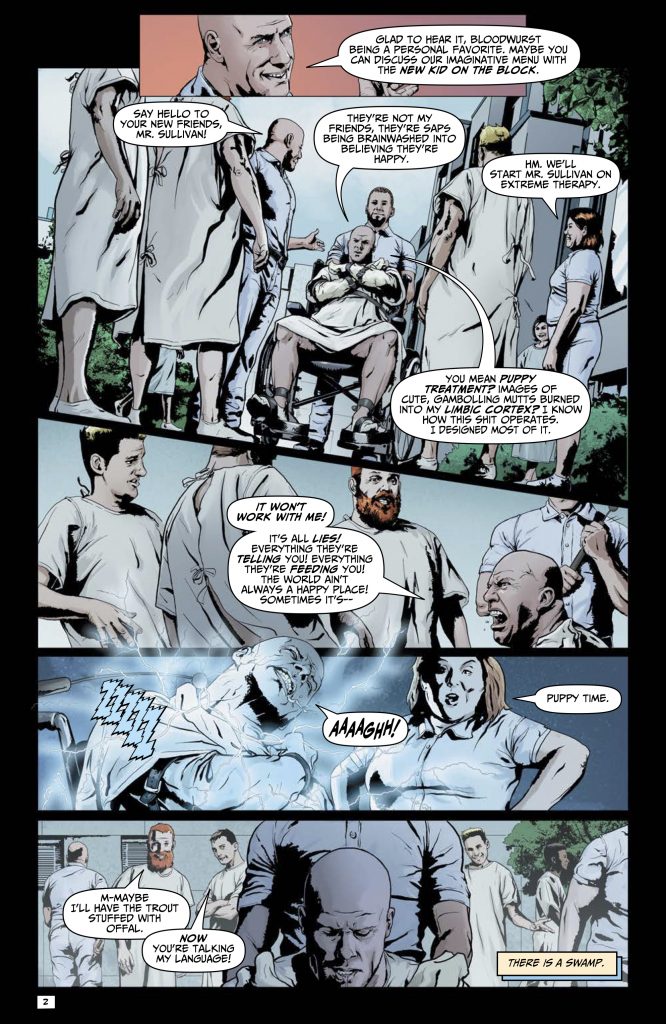 Back at Cohen’s, Kim and Jerry were undergoing misery therapy and then subjected to the JoySuckers.   They were actually Mexican Coatis that were bred to feed upon any human joy. Kim and Jerry thought for sure that any happiness had been driven from them. But the JoySuckers felt otherwise. What the Hell! Apparently, they still make each other have a vestige of happiness. Because of that, their cycle of treatment would continue. 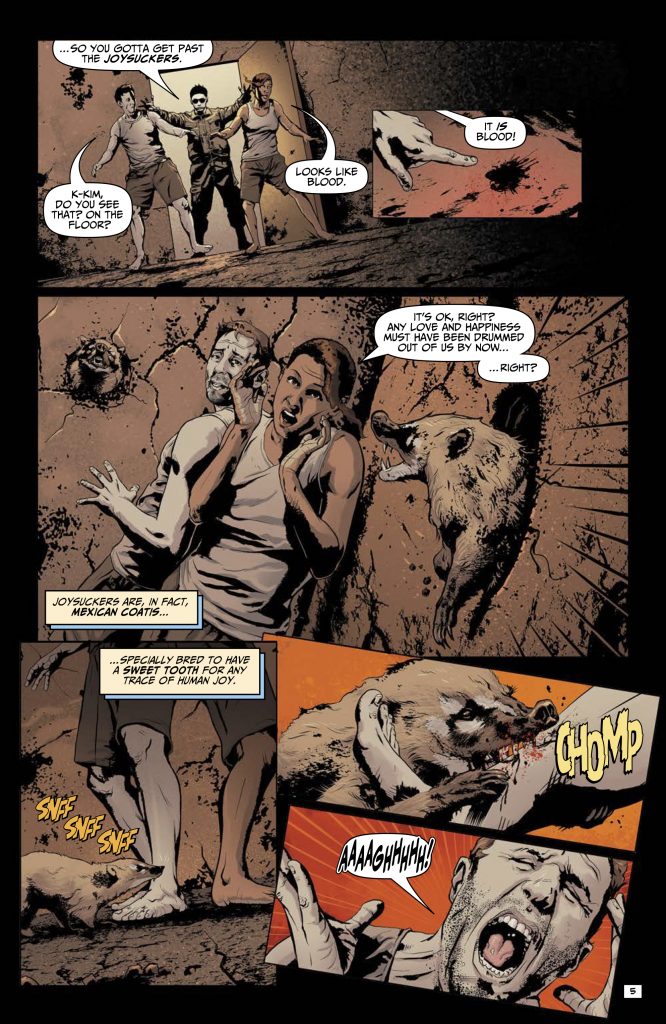 Meanwhile, Cohen had sent a group to retrieve Sullivan. They would introduce these happy campers to a bit of misery, Cohen style. Nothing says unhappiness like a plethora of grenades. The assault had the desired effect. A huge number of most likely unhappy dead people and Sullivan had been liberated. Although it also required an example to be made. A young nurse who had been looking at Sullivan was caught in the shrapnel of the explosion. She could still be saved, but his “rescuers” showed him that their cause of misery allowed no sentimentality, as they shot her dead. 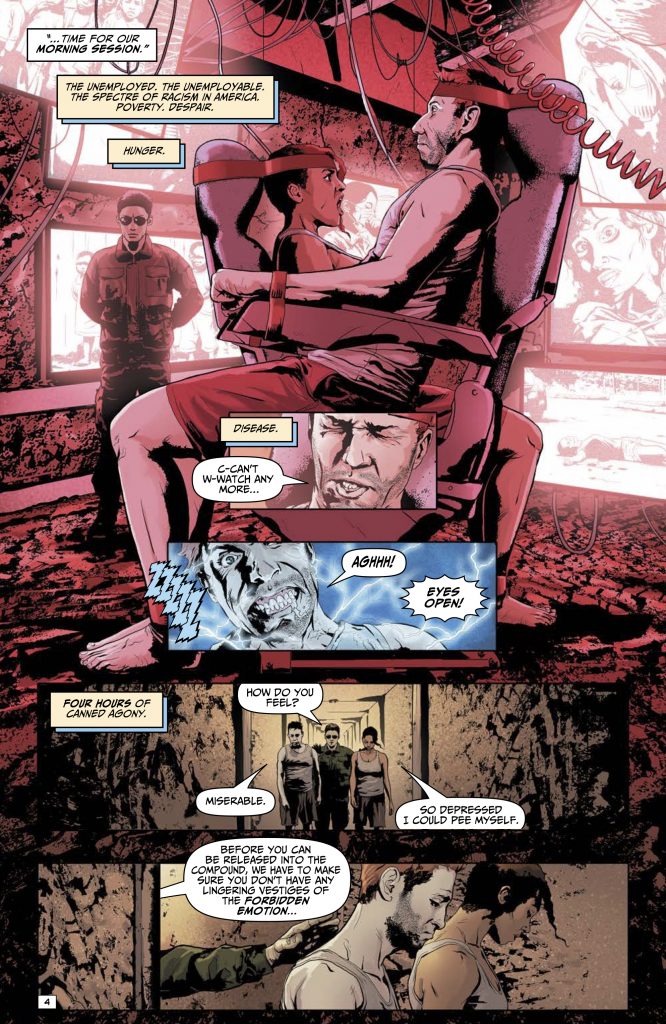 Speaking of misery, Jerry and Kim continued their treatments with no end in sight. They tried to decipher what was keeping them from being miserable enough to be let out of the treatment center. Kim hesitated but then she told Jerry something she had been hiding. Earlier in the series, he had questioned her about her whereabouts, she now told him that he had been right to question her. She had been a plant. Her job was to get close to Jerry and Hamm to find out the location of Cohen’s compound. She had a tracking implant in her arm.

If nothing else had done it, this revelation had the desired effect. Jerry was devastated. Did that mean their relationship was a fraud? Kim assured him that it wasn’t. It hadn’t been part of the plan. It just happened. But Jerry couldn’t find it in his heart to believe her. And that broke Kim’s heart. So much so, when they were put in with the JoySuckers, they did nothing. Jerry and Kim were now free from therapy…and any happiness they had together.

Around that time Sullivan was brought to the Cohen Compound. Naturally, most of the inhabitants had known him when he worked for the Happiness Crew. That made him not very popular…in the extreme. But Cohen himself saw Sullivan as an asset. Who hadn’t made mistakes a some point in their lives? As the crowd calmed down, Sullivan spied Kim. He recognized her and knew what she was sent to do. With that knowledge, Kim was destined for the Swamp of Despond. However, at this point, it was only Sullivan’s word they were going by. But if Jerry could verify his story, her fate would be sealed. Had she told him about the plot? If he didn’t confirm, he too could be found guilty by association. It was his choice. And that choice was…to be found by reading Issue 5.

Issue 5 takes a different approach than the previous four issues. There has always been a touch of humor in the situations Kim and Jerry found themselves in during the first four issues. But not so in Issue 5. Peter Milligan’s story takes a much darker tone in this narrative. Not any “Ha-Ha” moments to be had here. The battle between happy and sad apparently causes nothing but drama and tragedy. The sad story of Kim and Jerry amplify this. Will Jerry allow Kim to face the repercussions of her decisions? Has their love story actually reached the point of no return. I look forward to see how Milligan resolves this story arc. It’s become drama amped up and perhaps, in the end, it was always meant to be.

Michael Montenat has set a high standard for this series since the beginning and nothing has changed with Issue 5. In fact, with the more serious tone of this segment, he has upped his game even more. And that my friends, isn’t easy. Another creator who excelled was colorist Felipe Sobriero. As I aforementioned, there were no bright and happy moments in this chapter and Felipe’s color told that tale as much as Montenat’s art did. Somber browns and muted colors were the norm as misery was the pallet most used. Sobriero definitely brought his A-Game in that endeavor.

Happy Hour has covered the gambit of drama, humor, whimsy, and now back to drama. If you haven’t checked out this series, you would be well served to do so. Ahoy Comic’s Happy Hour Issue 5 comes out March 16th where great comics are sold.