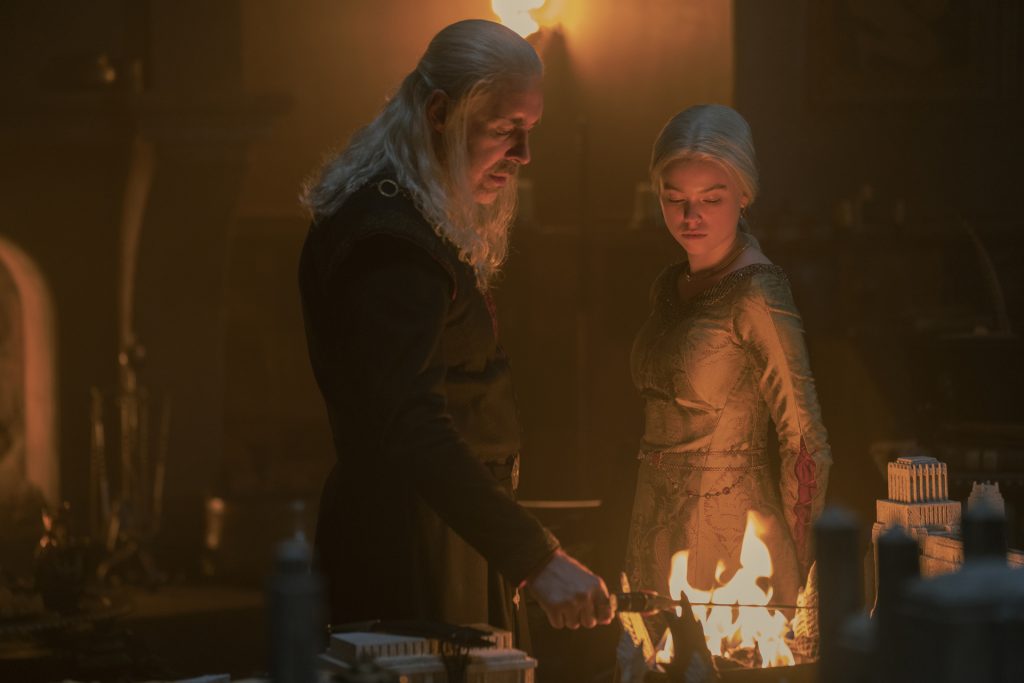 Welcome back to another recap for our beloved House of The Dragon series where we get to witness firsthand the schemes and machinations of those who desire power more than anything in their world. The more I watch this show, and its predecessor Game of Thrones, the more the symbolism of the iron throne sinks in and makes things more clear than ever. In this episode, we see all of that unfold and continue to maintain the tone while Viserys struggles to keep his power as King and maintain his sanity.

Episode four opens up with us witnessing the ritual of Princess Rhaenyra choosing her next suitor – a marriage to strengthen the political influence and power of House Targaryen. There are men of all ages, which is perplexing since one of them is older than her father, and another that could be a younger brother, most likely somewhere around eight years old.  If you know Rhaenyra by now (and you should!), you know this entire “arrangement” is a failure from the very beginning. Upon her arrival back to King’s Landing, she sees her Uncle Daemon and his trusty dragon Caraxes soaring through the skies.

Daemon’s mission (I’ll touch on this later) is to pledge his allegiance to King Viserys yet again, and offer the crown he was awarded by the Triarchy for his victory at the Stepstones. Viserys welcomes him back into the fold with open arms as a loving brother and a fool. As they celebrate in the garden, Rhaenyra’s once again feeling isolated and alone. Here we see Queen Alicent speak with her to mend their broken friendship and tells Rhaenyra it’s not easy being Queen and how she can also relate to those very same feelings Rhaenyra has. That feeling of Isolation for anyone with the type of power they have is never a good thing.

Daemon knows this and speaks with Rhaenyra about how she feels, and plays into it. We see this in action when Rhaenyra goes back to her room that evening and finds a bag with raggedy clothes in it, and within those clothes, a blueprint of her chambers – blueprints that show Rhaenyra there’s a secret passage in her room that leads outside. You might ask yourself “where does this passage lead and where is Rhaenyra going?”. Well, my friend, that passage leads to misfortune and shame. Not only does Daemon encourages Rhaenyra to sneak out from the castle grounds, but he brings her into a world she knows nothing about – the nightlife of the kingdom and all its vices.

Rhaenyra witnesses firsthand how the citizens feel about her being the next in line to rule, much of it steeped in misogyny and ignorance but also the beauty and wonders the people enjoy regularly. Everything from fire-breathing dragon statues, puppet shows, magic tricks, fist fights, and even people getting down and dirty wherever they can. Speaking of, Daemon, in all of his chaotic and sheisty wisdom decides it’s a good idea to take Rhaenyra to a brothel, most likely one that he goes to frequently. He stokes the fires of curiosity within Rhaenyra by describing what goes on in there and why and painting a picture of freedom – something Rhaenyra has been longing for that she has never really experienced. Pure, unhinged freedom – no shackles of duty and kingdom to hold her back, and with the help of some wine or whatever Daemon gave her in her cup, she falls for it every step of the way.

I’ll spare you the details of what transpires next, but it’s not looking too good for Rhaenyra right now. Being abandoned by her Uncle at the brothel, she heads back to the castle and back to her room. Someone sees her leave the brothel and heads on his way to report it, but to who? This sneaky little spy goes directly to Otto, the man who is supposed to be the hand of the King, but also has his own ambitions; we saw this for ourselves in the very beginning. In true Otto fashion, he reports this to the King, and here is where things go downhill for Rhaenyra. The only good thing that has come out of this is what seems to be love blossoming between Rhaenyra and her most trusted knight Ser Criston Cole.

Confronting Daemon in his drunken stupor, Viserys is vexed with anger and frustration from learning what Daemon has done to his daughter. With the thought of Daemon sleeping with Rhaenyra bouncing around in his mind, he asks Daemon about it – which he neither confirms nor denies. With this information and damage to reputation looming over Rhaenyra and House Targaryen, Daemon proposes another solution to “save” the house and bring them back to their former glory – marriage. That’s right! Daemon is proposing the King let him marry Rhaenyra, obviously only for political reasons which the King is strongly against. Rhaenyra is now confronted with this truth from Queen Alicent after overhearing Otto break the news to Viserys, which she vehemently denies, even going as far as to swear on her late mother Queen Aemma it’s the truth.

She’s again confronted with this by King Viserys which actually becomes a productive conversation, with the King realizing Otto has been playing him the entire time. We’ve seen this from the very beginning with the questionable advice Otto has given the King, and now Viserys sees it for himself. Everything from pushing the King to remarry to make the crown and kingdom appear stronger, to strongly advising him to announce baby Aegon, his grandson, as the next heir to the throne. As a result, King Viserys relieves Otto of his duty as the hand to the king.

Remember earlier I said I’ll touch on Daemon’s plans? Let’s try to connect a few dots; Daemon brought Rhaenyra to the brothel and engaged in sexual acts with Rhaenyra, and then left her there. The spy that saw Rhaenyra leave is the same spy that informed Otto, and paid a visit Mysaria (Daemon’s wife) and gave her some coins, which is probably what Otto paid him for the information. Did Daemon play into Otto’s obsession with power to his own benefit to dismantle the small council one by one? Was this part of his ultimate plan to dethrone his brother from the iron throne and claim the crown for himself? Only time can tell and so will I, on the recap of the next episode!