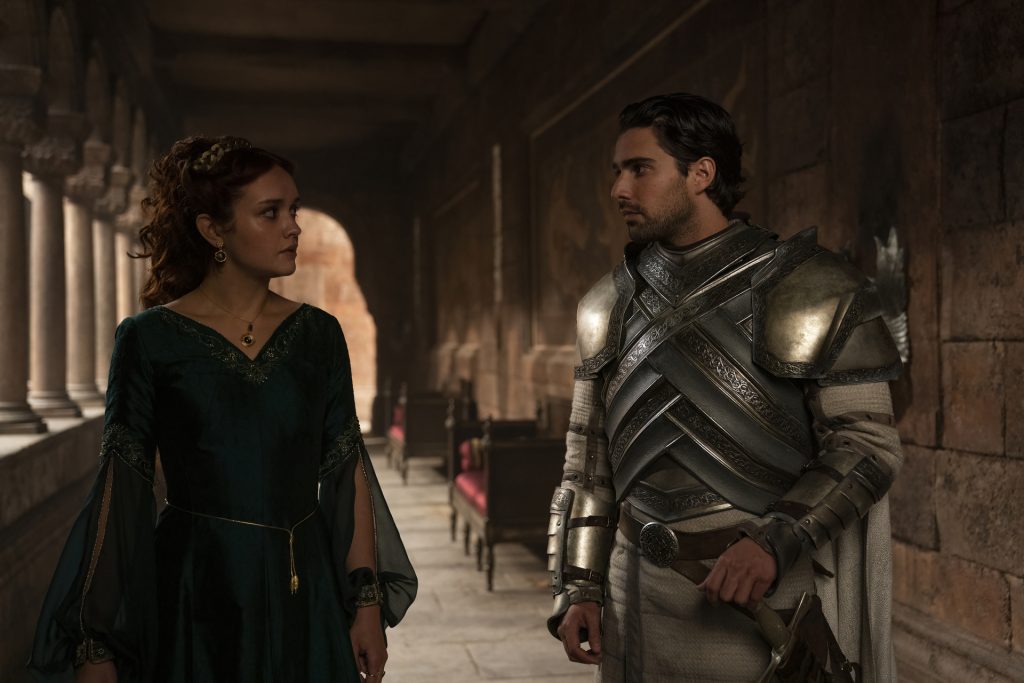 Hello friends, we are back with another recap for House Of The Dragon, and this was another jam-packed episode with so many things to unpack! This episode will include the last major time skip for the series with a fully grown ensemble of our favorite characters, with Emma D’Arcy making her debut entrance at the very beginning of the episode as Princess Rhaenyra – and right from the beginning the old gods, or the new, don’t hold her in their favor. The opening scene shows us Rhaenyra giving birth to her newborn son. Immediately after the wretched Queen Alicent summons the newborn to her quarters. This is a sign of her ongoing grudge match with her ex-bestie Rhaenyra and she has absolutely no problem holding it.

King Viserys has somehow managed to live long enough to be an old man, er…an older man; decrepit looking and now missing an arm. Queen Alicent (now played by Olivia Cooke) shares in the joy of a new addition to Rhaenyra’s family, but also throws shade at them by whispering to Ser Laenor (played by John MacMillan), “Do keep trying Ser Laenor, soon or late, you may get one who looks like you.” She clearly knows of Rhaenyra and Laenor’s agreement and lets him know she’s in on their dirty little secret. We all know Game of Thrones is riddled with foreshadowing themes and House of The Dragon is following suit perfectly. How so? The closing scene has Ser Laenor and Princess Rhaenyra leaving the King and Queen’s quarters leaving a trail of blood behind them. We can take this as the beginning of the end for Rhaenyra specifically since it’s her blood, and eventually the end of House Targaryen.

The following scene introduces us to a young group of boys, who don’t possess any Targaryen traits, and a new Commander of the City’s Watch, Ser Harwin Strong – son of Lyonel Strong, The Hand of The King. Ser Harwin asks to hold the newborn child which Ser Laenor took the liberty of naming Joffrey. You can tell by everyone’s body language and somewhat subtle glances that Ser Harwin is the father of the boy and Rhaenyra’s new secret lover. Meanwhile, in the dragon’s keep, a young Jacaerys is learning to train his young dragon Vermax. After his training, we see a teenage Aegon poke fun and tease his younger brother Aemond with a pig that has straw wings taped to it. Targaryen family tradition dictates every Targaryen child is to be bonded with a dragon and in this case, Aemond has yet to get his dragon yet.

After this horrible joke, Aemond’s curiosity gets the best of him by allowing him to walk into the dragon’s den – it’s literally a dark and cold underground cave with bloodthirsty dragons looming around every corner. As a result, we both receive a fiery introduction to another dragon that could possibly belong to Aegon, named Sunfyre. While all of this is happening, Queen Alicent decides she wants to talk to Viserys about Rhaenyra’s blatant negligence of her duties to produce a legitimate heir with Ser Laenor, a Velaryon – a race that also has very distinct features. What follows shortly after is sure to set the tone for the rest of the season and for all intents and purposes the future of House Targaryen (that we sort of already know about – especially if you read the books).

Queen Alicent, in all of her wisdom, bestows some knowledge on young Aegon, the very same possible outcome of their family that her father, Lord Otto Hightower, told her as a young girl as he was being banished; once the King dies Rhaenyra will be Queen with her son Jacaerys being the next in line as the rightful heir to the throne. Once that happens, Aegon’s head, and now possibly Aemond’s, will be on the chopping block in order to cease any contestants to the throne. At first, Aegon doesn’t quite get it – he’s still a young boy that doesn’t necessarily understand politics nor the workings of the world for those in power. This could very well drive a hateful wedge between two cousins that grew up together, which could ultimately be the cause of their demise.

Elsewhere, our beloved Daemon is now married to Laena Velaryon and is with his new family having dinner with a new player, Prince Reggios, in Lys. Daemon and Laena start to discuss Prince Reggio’s offer of having a permanent residence in Lys with more than enough coin and privilege to satisfy anyone’s hunger in exchange for their help against the Triarchy, as his ancestor Aegon The Conquerer once did during his reign as King. Sticking true to his nature, Daemon shuts down any sound reasoning from his wife purely out of self-interest. It seems he has lost interest in ruling and is now seeing himself as a mercenary for hire. To do away with the political troubles and turmoil in exchange for an abundance of gold, coin, and absolute freedom to do whatever you please sounds like one hell of a deal to me, where do I sign?

Back at the castle, the sons of both Targaryen houses (Viserys’ line and Rhaenyra’s line) are being trained in combat by none other than Ser Criston – and here’s where the juicy drama starts to unfold. In his training with the boys, Ser Criston demonstrates his resentment towards Rhaenyra by not giving Jacaerys adequate training but does so for Aegon and Aemond. After a sparring session with Aegon and Jacaerys, Ser Harwin calls out Ser Criston on his training methods and his discrimination, to which Ser Criston poses a very spot-on question, baiting Ser Harwin to expose himself as Rhaenyra’s secret lover and father to Jacaerys; falling into a trap for everyone around to see. The relentless assault by Ser Harwin puts himself in harm’s way and potentially ruining his father, Lord Lyonel’s political career as The Hand of The King.

Rhaenyra is made aware of what has transpired and now has to once again strategize how to not only maintain her secret affair, and her standing but possibly her life and those she loves. Back in Lys, Laena once again discusses going back home but as always, Daemon pays her no mind, and while doing so makes sly remarks about her nagging him – he knows she’s right but doesn’t want to admit it. You can see Daemon is troubled for some reason and Laena is at her wit’s end with figuring a way to help him. All she wants is to go back home so their child that she’s about to give birth to can be born in her homeland the same way she was. While Daemon and Laena are going through their own marital problems, the small council has gathered to discuss the usual political strategies for the Kingdom.

Feeling as though she’s backed into a corner, Rhaenyra makes a move for peace with Queen Alicent by formally apologizing, and suggesting a marriage between her eldest son Jacaerys and Alicent’s daughter Heleana. To make this deal even sweeter, Rhaenyra offers a dragon’s egg for Aemond should Syrax produce another litter, which King Viserys thinks is a damn good deal. In theory, this would unite both families and strengthen House Targaryen but of course, Alicent is against it. To make things worse, Lyonel tries to resign his position as The Hand and begrudgingly divulges exactly why. The King doesn’t let him but instead grants him the time to escort Ser Harwin back to their family castle to take over while Lyonel remains at the King’s side. While meeting with another member of House Strong, Alicent informs Lord Larys of what has transpired.

Here is where we see more of Larys’ treachery, as he goes down to a dungeon and gains recruits for his grand scheme, which has yet to be revealed. One thing I can say about Lord Lys is even though he’s not the most glorified or appealing character in this story, he’s very cunning and clever and is someone that absolutely no one should underestimate. Back in Lys, Laena is having complications with giving birth, and things are looking rather dire. Daemon now faces the same scenario Viserys was in with his deceased wife Aemma – save the mother or possibly save the unborn child. Laena, weary and exhausted, takes that choice away from Daemon by walking down to the beach where her dragon (the infamous Vhagar from stories from Game of Thrones) is resting and commands it to give her a fiery death, one that she’s content with. Daemon doesn’t make it in time and witnesses Vhagar incinerate his wife, leaving him devastated.

As Rhaenyra and Laenor prepare for their departure to Dragonstone, Lyonel and Harwin are on their way back to Harran’s Castle, all while being pursued unknowingly by Larys’ “shadows”. Both father and son succumb to a death undeserving of their stature and reputation, leaving no one in her way to stop her from getting what she truly wants. Alicent had asked Larys during their meeting if there were no one that was on her side, of course, this question was figurative and rhetorical in nature but Larys took it quite seriously and saw that as an opportunity to have the Queen in his pocket. Now she knows that everything has a price and the piper must be paid – whether it be in coin or in blood, and no one, not even the Queen, is above owing a debt that has to be repaid.