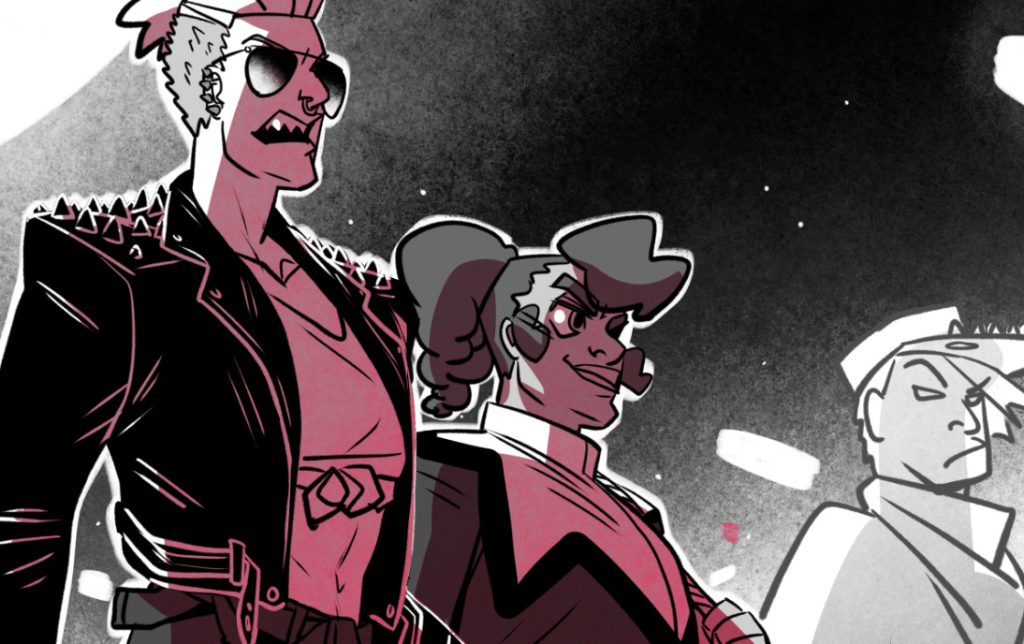 The Indie Comics Spotlight is a series that aims to bring attention to independent comic books, publishers, and creators deserving of wider recognition. In this installment, we speak with Jess Herron, creator of the webcomic, Midnight Furies.

Tristian: Hello Jess! Thank you for taking time to speak with Geek Vibes Nation about your comic, Midnight Furies. Could you tell our audience a bit about yourself and your comic book?

Jess: Of course! I’m Jess Herron, a comic writer and artist based out of the US. I grew up reading a pretty wide variety of western sci-fi and fantasy, early webcomics, as well as American superhero comics and Japanese manga. I pull from all those influences to create the kind of feminist stories that I wish I had had available to me as a young adult.

Midnight  Furies is a queer supernatural sports comic about a 17-year-old high school dropout, Zoe Maxwell, desperate for any way to keep playing basketball. Her friend Chase has the answer: an interdimensional basketball tournament called The Midnight Games, where you can play for time added onto your life! But Zoe has to be careful. There’s something fishy going on in the Midnight Games, and Chase is playing for more than just points…

Tristian: What made you want to create your own comics? What were some of your inspirations?

Jess: I actually grew up writing prose and drawing illustrations separately from each other, on top of reading pretty much everything I could get my hands on. Right before college, I read The Long Halloween and thought “damn, what would this look like if it was moving?” and decided to go into animation. But after studying film and hand-drawn animation in college, I realized that it was an INSANE amount of work! So I pivoted and took another career direction for a while, until my late 20s when I realized that I was desperate to tell stories again, and this time with comics. Luckily, comic paneling and film/animation have a lot of skill crossover, so it felt pretty natural to slide into making comics.

Tristian: What are some of the highs of producing your own comic? How do you deal with the lows?

Jess: The highs are definitely the creative control I have, and the genuine positive reactions I get from fans online. When I started it, Midnight Furies was kind of a risk, genre-wise, so I wasn’t sure if people would be into it. But then there was such an immediate positive response! It was really wonderful. And that feeling definitely helps get me through the lows. I had a bad repetitive stress injury going into the project, and the frustrations of dealing with that on top of the comic and the day job really taught me about the importance of working sustainably. If my health and mental well-being aren’t taken care of, then nothing’s getting done!

Tristian: What’s it like collaborating with an artist? Are there any difficulties? If so, how do you deal with them?

Jess: I do both the writing and art on Midnight Furies, actually! Sometimes I’m glad to be a one-woman pony show, because I get to have that full creative control, but someday I’d love to collaborate with an artist on a project. I’ve got a lot of stories to tell, and not enough time to draw them!

Jess: Nike had it right- Just do it. Wherever you’re at, whatever you can do, just do it. When I started Midnight Furies, I hadn’t picked up a pencil in 5 years and could barely move my hand for 20 minutes at a time. Work on a project that you’re passionate about, because that passion will get you through the rough parts and help you cultivate the dedication you need to see something through.

But that said… don’t feel the need to monetize your work. I know everyone’s about ‘the hustle’, and the economy’s in the crapper, but that’s a load of capitalist BS. If you want to make a living at it, cool. Practice your anatomy, color theory, composition, work discipline, etc. But if you have an idea and just want to have fun with it? Give yourself the freedom for it to be exactly that. Fun. We need more of that in the world.

Tristian: Where can our audience connect with you online and find your work?