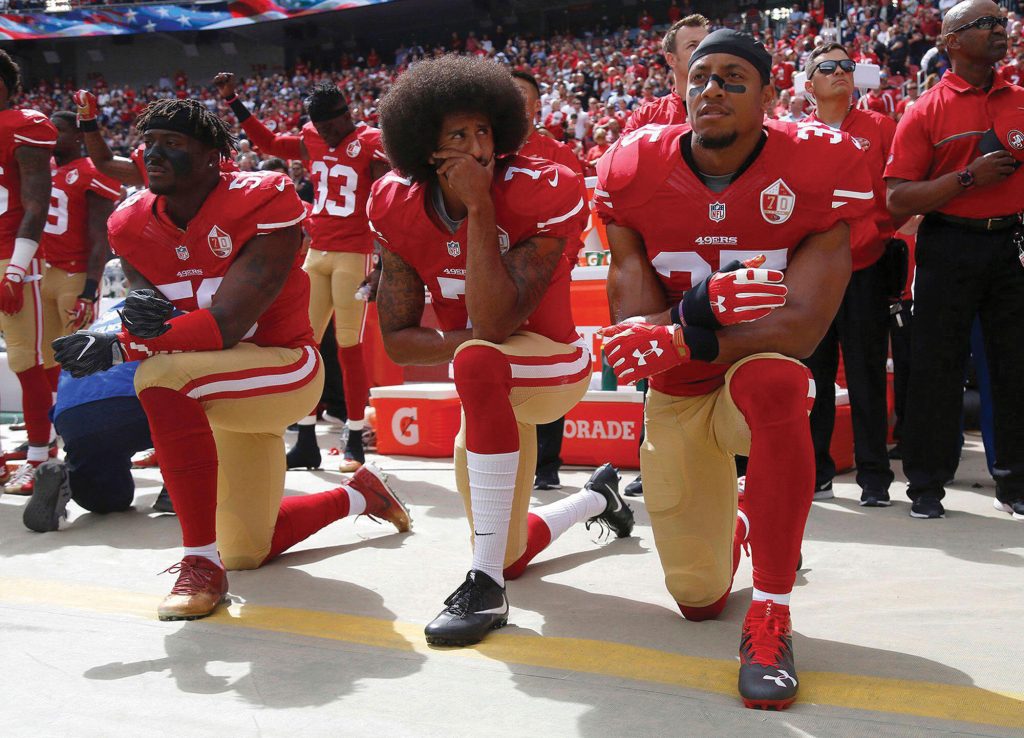 Kaepernick & America opens with a white man taking a Colin Kaepernick jersey, throwing it in a barbeque grill, dousing it in gasoline, and setting it ablaze.

It’s a searing, uncomfortable image and precisely the documentary’s point. Kaepernick & America recounts the sports controversy that ignited the country: football quarterback Colin Kaepernick’s kneeling during the national anthem in protest of the violence and injustice against Black people. Filmmakers Ross Hockrow and Tommy Walker walk the audience through the essential details of Kaepernick’s protests, from his personal and sociopolitical motivations to the myriad responses, most of them negative. It seeks to provide a baseline of Kaepernick’s cultural stature and how it was violently upended.

Kaepernick & America is most effective as a mirror reflecting the intense reactions to his kneeling. As someone who regrettably didn’t follow Kaepernick’s protests closely, seeing fans stomp on and burn his jerseys was shocking. (One scene shows a group of men in a field shooting up and then immolating his jersey, an act steeped in disgusting irony.) Nearly every reaction was a variation of the now-classic “shut up and dribble” refrain. A waitress at a restaurant that once served Kaepernick-themed hot dogs said she hoped he would “find redemption” but cautioned it would take a lot. Many people described his actions as disrespectful, vile, and stupid, demanding he leaves the country if he didn’t stand.

Of course, the hypocrisy of these vitriolic, violent reactions is the reality that the documentary lays out. Kaepernick’s protests were born of the devastating murders of Black people by police officers, which Hockrow and Walker unflinchingly display. Kaepernick repeatedly explains his reasons in archival footage and never directly mentions the flag. The protest itself was silent and peaceful. He sat for two games and then knelt after a conversation with former Green Beret Nate Boyer (one of the few people who sought understanding). And yet, clips show fans at a Buffalo Bills game wearing T-shirts with Kaepernick caught in a sniper rifle’s crosshairs.

Kaepernick & America contextualizes the moment in broader discussions of anti-Black racism, the political climate, particularly in 2016, and past political protests in sports. Activist Deray Mckesson explains the essential functions of white supremacy. CNN anchor Don Lemon outlines the two opposing media forces: Kaepernick and Donald Trump. NFL reporter Steve Wyche drew parallels to NBA player Mahmoud Abdul-Rauf, who staged his silent protest of the American flag during the ’90s to the detriment of his career. Nothing presented here is revelatory to anyone who can relate to the American Black experience. (As a Black man myself, the only new context was Abdul-Rauf’s story; my learning about him in this documentary is part of the point.) To people who can’t, however, I imagine, or hope, that they realize that Kaepernick’s protests didn’t happen in a vacuum. There are levels to this.

Don Lemon explains in the documentary that there is power in symbols. Kaepernick & America takes that statement to heart. Hockrow and Walker are intentional in how they deploy symbolic imagery, whether it be community murals of Kaepernick or brutal acts of desecration. The film incorporates the global response to George Floyd’s murder and shows images of protestors holding signs demanding apologies on Kaepernick’s behalf. It feels like he is a folk hero lost to time and immortalized by depictions of awe and anger. (Lemon alludes to as much, discussing him in concert with sports legend activists like Jesse Owens or Muhammad Ali.)

But Kaepernick is very much alive, and his participation in this documentary is sorely missed. We don’t know why he didn’t take part or if the documentarians made overtures to him. They offer a justification, with the featured guests playing him up as a mysterious, largely silent figure. (It does align well with the film’s theme of symbolism.) They also offer up several compelling conjectures and inferences that would have benefitted from Kaepernick’s first-hand account. The film often cites Kaepernick’s transracial adoption as a significant influence on his professional career and later activism. However, the only available insight comes from adoption expert April Dinwoodie, a transracial adoptee. The documentary can only guess at the role Kaepernick’s adoption and upbringing played in his life, which feels unfair.

Kaepernick’s not-so-ghostly shadow blankets several key narrative threads. His friendship with coach Jim Harbaugh, increasing interest in Black issues, and the infamous 2019 NFL workout all miss Kaepernick’s perspective. The documentary makes due, but I asked myself several times what he thought as the interviewees tried to add some much-needed color. Try as Hockrow and Walker might, Kaepernick’s absence is glaring.

Kaepernick & America is an acceptable account of the protest that changed the sports world. At a brisk 88 minutes, it offers enough depth, nuance, and frankness to convey the ramifications of Kaepernick’s brave choice. However, without his active presence, the documentary feels incomplete. It suggests that Kaepernick deserves hero worship, but his kneeling was profound because of the very human risk. Hagiography doesn’t serve Kaepernick’s story well, especially as his replacement for his own words.

Kaepernick & America is an official selection of the 2022 Tribeca Film Festival. 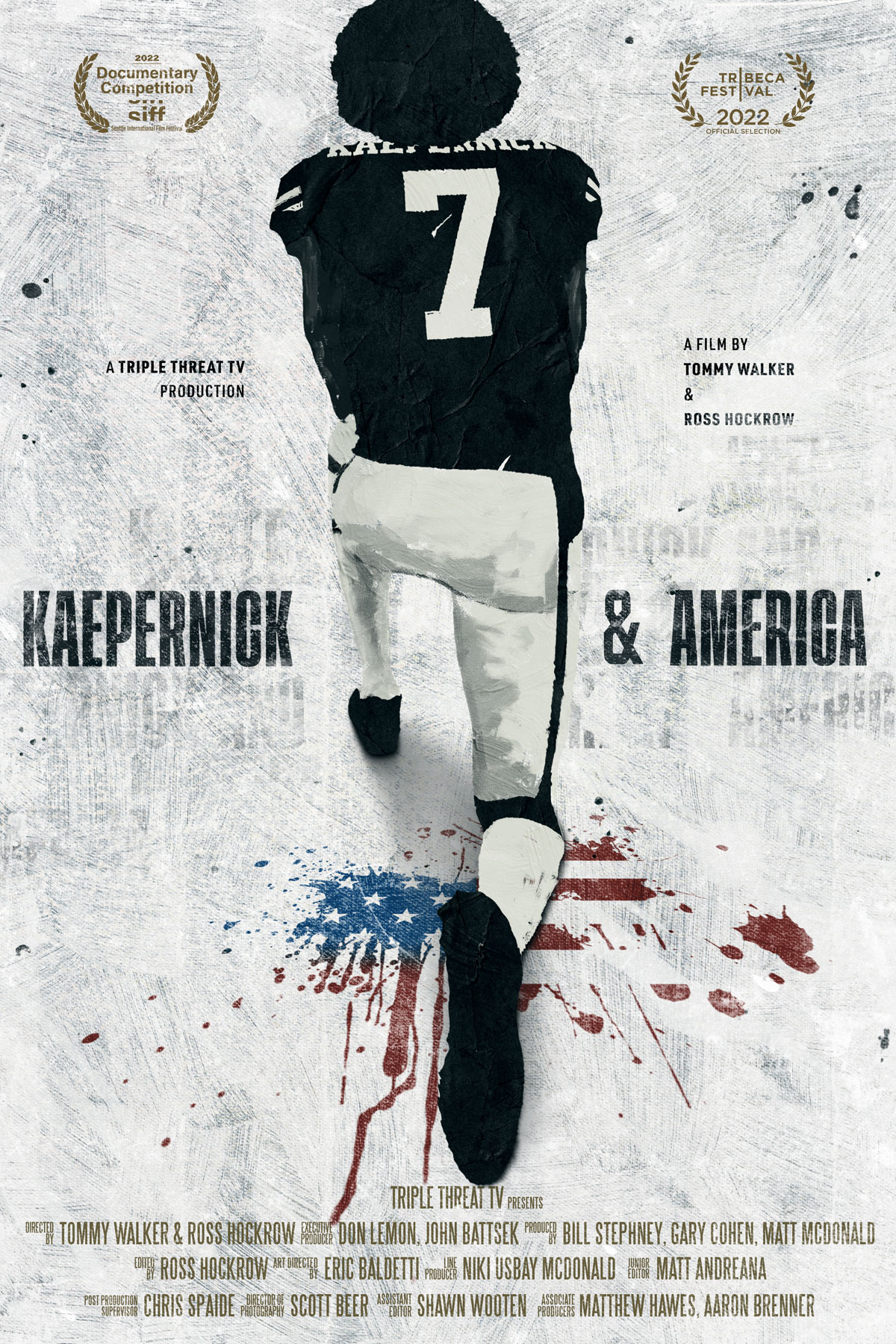 'Kaepernick & America' is a brisk, fine recollection of Colin Kaepernick's game-changing protest, but his missing voice leaves it feeling incomplete.