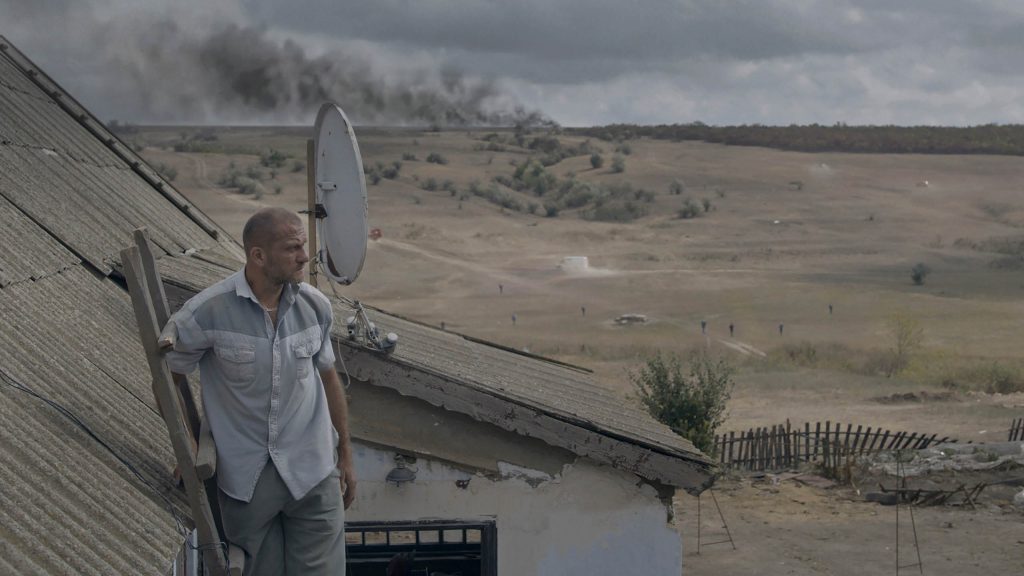 How much do we really understand the human cost of war? It’s an easy question to sneer at. And yet, we often seek to put faces and names to conflicts covered in newspapers or news programs. We expand our language and scope with each era, with recent war films specifically examining the mental health crises for combatants and civilians. No matter how sophisticated or complex, the reaction to seeing how war can tear us apart at a molecular level never lessens.

KLONDIKE, the winner of the World Cinema Dramatic Directing Award at the 2022 Sundance Film Festival, lasers in on the Donbas war, an armed conflict between Russia and Ukraine over the Donetsk region that began in 2014. Irka and Tolik are a couple living in a Donetsk village ravaged by battles between Ukrainian forces and separatist groups. The couple is expecting their first child, pushing the stakes of their life near violence to unbelievable heights. How can they possibly bring a child into the world when their modest house is missing a wall, destroyed by a plane shot down out of the sky? What are Irka’s concerns about a stroller in comparison to increasing pressure from Tolik’s friends to join the separatist movement? Despite their extraordinary circumstances, Irka and Tolik push ahead, even though the world around them threatens to swallow them whole.

Director Maryna Er Gorbach creates that unbearable tension with striking and reverent directorial choices. She doesn’t seek to recreate the chaos of a warzone, but rather capture its quietly vicious brutalities. She’ll keep her camera still while military vehicles enter and leave the frame in the background of a conversation between Tolik and his friend. She loves holding focus on the ravaged surroundings, even if her characters exit a scene to continue a chore. It thoughtfully communicates how small Irka and Tolik are in context of the enormity of the threatening world around them.

Gorbach’s signature choice, the one that elevates KLONDIKE to technical greatness, is her use of the steady camera pan. She opens the film with it, capturing with sharp precision how that downed plane brutally upended Tolik and Irka’s lives. When the camera finally stops on the giant hole in their house, daybreak in the background, it startles you with both its undeniable beauty and undeniable horror. It’s a shot technique she returns to often throughout the film, and it’s effective each and every time. In moments of violent terror and quiet observation, Gorbach never loses grip of how destructive war can be, especially for a budding family caught in the physical and ideological crossfire. It makes their resilience, their determination to live normally, incredibly compelling. It also heightens the tragedy that befalls them.

Of course, KLONDIKE’s release coincides with the increasingly hostile situation between Ukraine and Russia, and it’s nearly impossible for that context not to resonate as you watch Tolik and Irka’s struggles. For those who may observe the conflict from a remote, disinterested distance, Gorbach’s film will certainly bring it closer to home. Language barriers and geopolitical nuances don’t obscure the image of a pregnant woman fighting to survive the unthinkable for the sake of her child. Whether or not you view KLONDIKE as a political statement, it’s an undeniably human and empathetic one, brought vividly to life.

KLONDIKE had its World Premiere in the World Dramatic Competition section of Sundance Film Festival 2022.