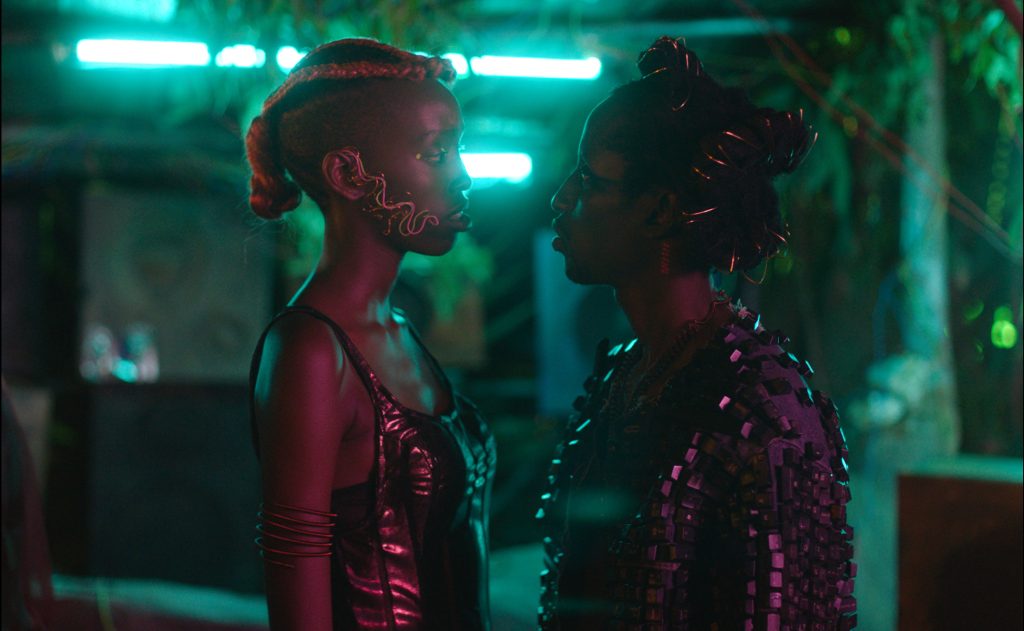 Director Anisia Uneyman and Saul Williams’s Afrofuturistic film Neptune Frost has variously described as inventive and incomprehensible, techno and cyber-tribal, lo-fi and musical. Yet the actual experience of watching the film defies written description. This is a film that interweaves smooth, subtle beats and a distinctly memorable technological aesthetic; that is both dreamlike and grounded, abstract yet naturalistic. This is a film that simultaneously uses high sci-fi concepts to communicate political realities, exploring the intersection of race, gender, class and labor, critiquing the exploitation of the African continent by capitalistic powers. In short, this is a film that demands to be experienced, listened to, thought about. Undoubtedly, the creative force of Uneyman and William’s vision are enough to warrant that attention.

If the plot of Neptune Frost is to be summarized, it would go something like this: Neptune (Elvis Ngabo and Cheryl Isheja), an intersex runaway reconfiguring their gender identity, dimensionally collides with Matalusa (Kaya Free), who has left the brutal conditions of the mine where he works after his brother Tekno is brutally killed by an overseer. Their paths intersect in a camp of radicals, who, in defying “the Authority” that has brutally repressed protest, have repurposed technology to create their own community: huts made of computers and screens, fashion and makeup featuring keyboard caps and transistors. There, Matalusa and Neptune fall in love, and—to grossly oversimplify—power a hacker rebellion against the global capitalistic, technological extractive economy.

But this summary suggests an uncomplicated linearity that the film does not quite adhere to. The film’s style is understated and naturalistic; scenes flow from place to place, time to time, reality into dreams. Backstories are smoothly interwoven with present moments, while present moments seamlessly transition into dreams. This understated style works well to keep Neptune Frost grounded, despite its sci-fi influences.

Nor is “musical” a sufficient term for the film’s soundscape. “Musical” tends to evoke sung-through stage musical style movies with numbers and setpieces, a la Moulin Rouge or The Greatest Showman. There, music is generally non-diegetic: though characters express themselves through song, the in-universe characters aren’t actually singing. In Neptune Frost, however, Williams’s music is naturally woven into the film’s reality. Characters use music to cope with the rhythms of daily work (as one miner puts it, “mining is music”), express their identities tell stories and histories; they rap, sing drum, dance, play handmade electric guitars. Aside from being a critical element of the film’s thematic landscape, too, Williams’s music slaps; the film’s soundscape is incredible, and one of my personal favorite elements of the movie.

The difficulty of the film lies primarily in its sci-fi concepts, which can be hard to comprehend: explanations about dimensional travel, the “Motherboard,” and the logic of hacking are often delivered through lengthy and flowery verbal exposition. However, instead of becoming abstracted and ungrounded, these descriptors and terms are used to communicate concrete realities in a way that is imaginative, fresh, and striking.

A perfect example of this is the line explaining the collective’s motto and greeting, “Unanimous Goldmine.” As a collective member explains, “Unanimous Goldmine is the greeting of the resource rich who face a world beholden to the currency of our depletion. This golden salute elevates the vibration of metallic injustice to the threshold of planetary sustenance.” The descriptive language here may initially appear, like many other sci-fi exposition speeches, abstracted to the point of confusion. In context of the film, however, this line identifies the central driving point of our global economy: the Global North’s reliance on the rich resources of the Global South—in particular, Africa, a continent with a long history of colonialism that is still being plundered for resources. Coltan, the focus of the film, is a critical material in much of our technology, from phones to electric cars, and is often mined from Africa with child labor and other worker abuses.

“Unanimous Goldmine,” then, is a symbol of the film’s political commitment: it is a call for solidarity among those who form the proverbial goldmine of society today, and a declaration of resistance against forces which exploit and disrupt indigenous communities. Ultimately, Neptune Frost is a world where sci-fi and technology can become a place of resistance instead of restriction, possibility instead of production, and liberation—from racism, cisnormativity, exploitation, capitalism. And this world is only realized through the film’s creative vision— from Williams’s beats, to the actors’ naturalistic performances, to the neon cyberaesthetic of its set design and costuming—which must be experienced to be truly understood.

Neptune Frost is a film that demands to be experienced, listened to, thought about.