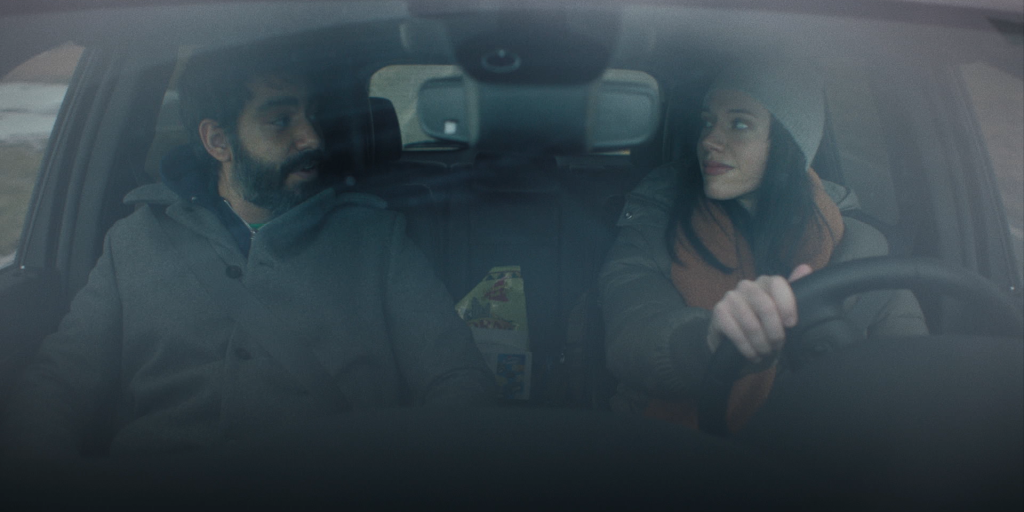 In a world much like our own, sightings of ghosts are confirmed for the first time. While only some of us can see them, they are visible through the right tools. Following this revelation Next Exit seeks to use this supposed guarantee of the afterlife to reframe some of life’s big questions. Does life have the same meaning to us when we know that there’s another place we go after we die? For both Rose (Katie Parker) and Teddy (Rahul Kohli) things seem certain in their immediate understanding. Rose follows her own silent determination to reach Life Beyond, a facility in San Francisco led by Dr. Stevenson (Karen Gillan) where people’s physical forms are terminated and transitioned into the afterlife. But plans for her self-made pilgrimage in solitude is disrupted by Teddy, a fellow participant that hitches a ride with her across the U.S.

Where the movie starts to see its failings is not really within the film we have and can watch; Next Exit’s marketing through its trailers paint a dramatically different picture, leaning more towards horror as the selling point. But that couldn’t be further from the truth. Rose and Teddy’s stories, and their story together respectively, have their share of horrors but much more in the reflective sense than the grotesqueries attributed to the genre space. If we could reframe those expectations set falsely through marketing campaigns, certainly quite a lot of films would get the reappraisal they need. In approaching Next Exit as the product of exploring those big questions about life and death through the science fiction lens of a reality where the afterlife is a tangible and trackable state, it tends to tether itself a little close to preconceived notions of what this really means for people existing within this world — living or dead.

The drama that writer/director Mali Elfman manages to extract from the disinclined buddy comedy dynamic of Rose and Teddy hits an entrancing, poignant stride. Major themes of regret and wistfulness poke through and naturally want for resolution, but not necessarily closure. Their journey to Life Beyond is, as you can predict, more encompassing than what they get at the other side of this greyscale rainbow. There’s a void here however, a missing warmth of sorts that doesn’t exactly balance with the compassion we do get once Teddy and Rose start to feel trust in each other. The contour of their push and pull appears to be taking the right turns to bring them around to a natural ending, but close up, there’s something a little detached about it.

Perhaps the emotional distance is an intentional one, represented rather sturdily and corporeally by the enigmatic figure Dr. Stevenson occupies. It’s a fascinating use of someone being there but not feeling like they are. Stevenson’s virtual-only presence (through news footage, ad spots, and promotional videos) puts forth an argument for someone being humanely vacant that could have done more, and I mean that both in the world she appears to service as well as the film that uses her as a true north for people like Rose. But Stevenson’s presence is as magnetizing as any ghost here.

Katie Parker’s portrayal of Rose and her dry sense of personality gives us a hearty baseline to believe and relate to her disenchanted annoyance of her unwanted partner. Yet Teddy’s oppositely flippant but jovial attitude brings a nice flavor and humor to counteract the bleakness. Although it is overused in many projects, the fire and ice combination of these two equips the audience with the means to ride through tough moments smoothly, even if you can notice the seams. But the more compelling beats lie among those interactions with others who float across the path towards their journey, some arguably more tortured than they are. And so the drama rests between the spaces of what is spoken aloud.

Next Exit sets down a decent foundation for experimentation within the world it has created, but, either by choice or circumstance, it stays low to the ground for a good chunk of the duration, exploring its ideas slowly and one at a time. As for its failings, they don’t appear as such from a level viewpoint but if the expectations are for this to reach the peaks and highlights of spook-em-ups, it’s going to disappoint in that regard. It doesn’t feel fully decisive with where it wants to land and the denouement comes across as a little uninspired but the stellar performances help it achieve a feeling of closure for us. As they say, it’s not about the destination.

Next Exit is now playing in select theaters and is available On Demand courtesy of Magnet Releasing.

Next Exit sets down a decent foundation for experimentation within the world it has created, but, either by choice or circumstance, it stays low to the ground for a good chunk of the duration, exploring its ideas slowly and one at a time.