‘Offseason’ Review: An Exercise In Atmosphere Over Substance 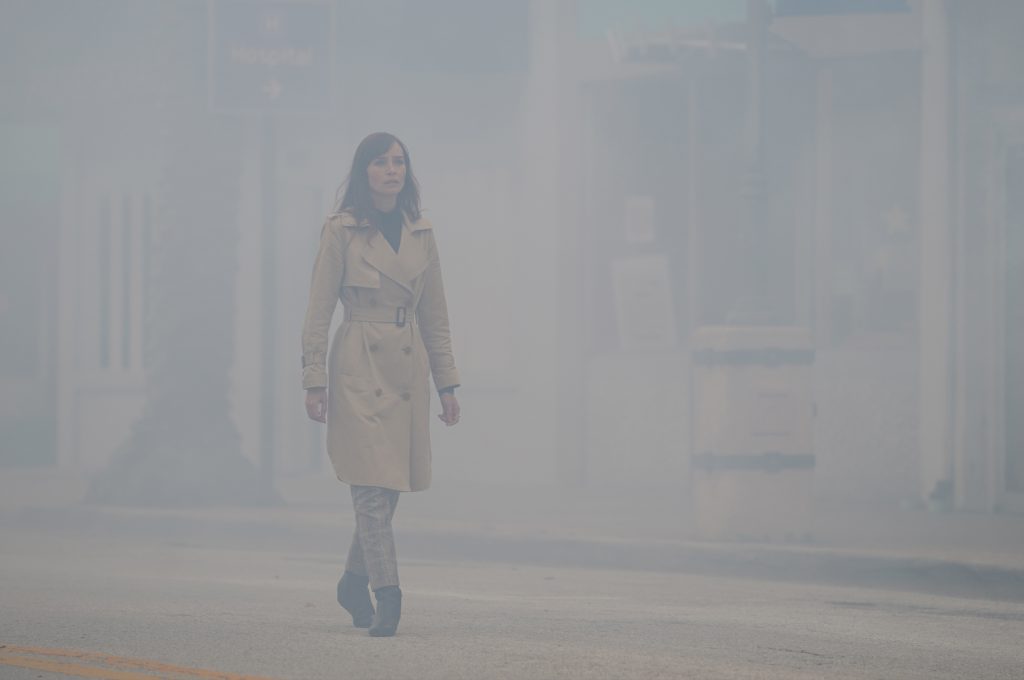 Mickey Keating’s latest film sets its sights small, matching scope with his typically restrictive small cast. It’s set in and around a small island town, completely remote if not for the revenue summer tourism pours into its local economy. Offseason centers around Marie Aldritch (Jocelin Donahue), whose mother Ava (Melora Walters) is buried on the island, just off the coast. She receives a letter that tells her that the gravesite has been defiled, requiring her to visit and assess the damage. The news floods her with the pain of resurfacing memories, that of supporting her during her mental decline, the unwitting backlash during regressive episodes, not to mention the inciting posthumous vandalism.

As mental illness debilitated and fractured her mother’s true personality, lucidity still shone through. During some such moments she mentions having once lived on the very island she’s now buried. For Marie, going back to that island threatens to rip back open those raw emotions, still bubbling after all these years. And so, Offseason wonderfully opens this narrative that resonates in us this internal crisis. It helps make us understand all too well the situation Marie now faces, the not wanting this, but the needing to do. It’s an opening to a film that vastly outshines what follows further down the line. It’s unfortunate that Offseason trades in its superb utilization of subtextual emotional politics for a direct and thuddingly literal presentation of the issues already easily inferred.

Marie and her friend George (Joe Swanberg) drive towards the coast in order to cross the only bridge towards the island. There they learn the bridge is already raised for the off-season, cutting off access to the island until the following Summer. The bridge operator (winkingly played by Richard Brake) denies them passage before seeing the letter that summoned Marie in the first place. After getting the go-ahead to enter, things start going south. Both for Marie, George, and the audience following them. The film uses its influences well here at the very least, invoking a mood and eeriness likely learned through Willard Huyck & Gloria Katz’s Messiah of Evil as clear inspiration. There is a clear presence on the island in Offseason, one that feels very much like a community on the inside but a cult-like nightmare on the outside. The most commendable thing about the film is it seeks to exist solely on its own rather than settling for leaning on its influences; it really does try to construct something all its own in original fashion. And it does achieve that, but at the expense of horror clichés lining the pathway leading away from its strong opening, almost making it feel like a fluke in retrospect.

As Marie becomes separated from George once they reach the island, the graveyard caretaker is nowhere to be found, leaving our main characters to simply wander the town and surrounding grounds trying to figure out what to do. It doesn’t add to the tension it tries to build, instead inviting strange, nightmare-like sequences that never really culminate beyond surface-level scares. At one point the grave site mentions Marie’s mother was a screen actress, but that part of her character doesn’t ever get properly explored, apart from a flashback that mines that for a short period that just furthers Marie’s frustration with Ava’s condition. Her mother as a character never really comes into focus as the true force that haunts Marie, despite the more immediate physical danger she finds herself in as a mysterious presence pursues Marie and George as they try to leave the island. This sequence in particular, which finds the two gunning for the bridge, yields a compelling and unexpectedly terrifying sequence but never attempts to make sense of itself after the fact.

By the time Marie tells her friend George about what she already knows about the island, everything suddenly becomes about what is on the surface in a swooping early disappointment. It’s recited without inflection or regard to the voice established of Marie’s character, instead sounding more like Jocelin Donahue, the actor as she works through what Marie would share or withhold from her friend just to get them to come with her. Even when the idea of Offseason is revealed to us as an audience in full, the above issues make it hard to go with what we’ve been shown without issue or snag. It compels nearly as much as it does disappoint, but with an ache that makes you wish that more could have been poured into this than was deemed sufficient. It’s now unfortunately trapped in its own thematic stasis, never able to break above the problems it’s created, almost exactly like its island’s doomed residents.

This island isolation horror story focuses too much on its atmosphere to really build anything meaningful or memorable.