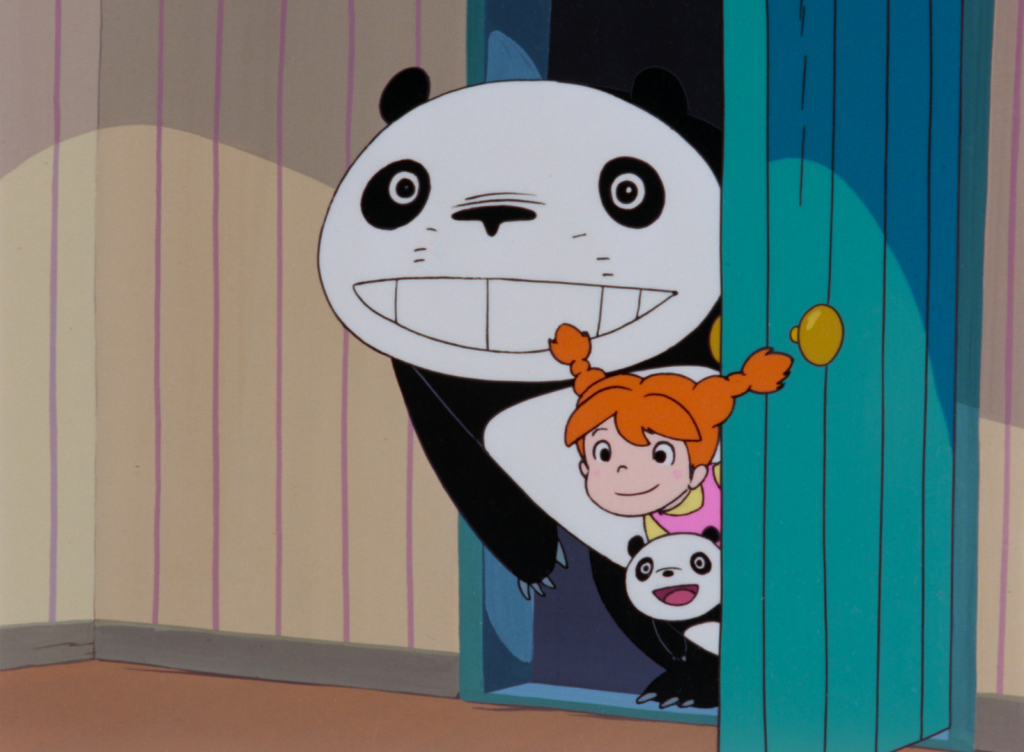 No anime fan worth their salt hasn’t been serenaded and subsequently destroyed by the emotional works of Isao Takahata and Hayao Miyazaki. Combining childlike escapism with nuanced drama, they have been quintessential pieces of comfort media for multiple generations now. But before classics like Grave of the Fireflies or Spirited Away, before even co-founding the beloved Studio Ghibli, they were just two humble Japanese animators looking to bounce back after a passion project was stopped dead in its tracks.

Takahata and Miyazaki had been working extensively on pre-production for an anime adaptation of the beloved children’s book series Pippi Longstocking. But after failing to acquire the rights from series author Astrid Lindgren, the project was scrapped. It seemed like all hope was lost…that is until they were able to take their original designs and channel it into something new.

The result was Panda Kopanda (Panda, Baby Panda) and its sequel, Panda Kopanda: Amefuri Sākasu no Maki (The Rainy-Day Circus), a duology of 30 min comedy shorts later packaged together as Panda! Go Panda! in North America. The films are being recolorized, remastered, and re-released by GKIDS in celebration of the first film’s 50th anniversary, and any classic anime fan will not regret seeking them out.

Both adventures star Mimiko, an energetic, fun-loving young girl who is left alone when her grandmother leaves to attend a memorial service in Nagasaki. Left to her own devices, she discovers a baby panda, Panny, and his father, Papa Panda, who have been helping themselves to the bamboo grove that surrounds her house. The three become an adorably fast family, but wacky hijinks ensue, as they often do.

Panda! Go Panda! may not sound like a seminal work in the shared libraries of two anime titans––it may not even feel like it at first––but it’s actually essential viewing. The aforementioned Pippi adaptation was a project deeply rooted in the values both creators wanted to explore in their work: childhood innocence, connection to animals, and larger-than-life adventure. To watch these characters and backgrounds come alive is to see the humble beginnings of the highly influential Takahata and Miyazaki cultural canon. It is a stepping stone up the mountain that is their impact on anime as a medium.

On the surface, many fans will notice early attempts at their signature styles, particularly that of Miyazaki. The color palette, line-work, and slapstick animation feel like natural precursors to his first breakout hit, Lupin III: The Castle of Cagliostro. Panda! Go Panda! is brimming with the same silly, absurdist sense of humor, though presented in a far more wholesome display.

But the most striking similarities are between it and My Neighbor Totoro, one of Miyazaki’s most treasured Ghibli entries. Despite the animation having vastly improved in the decade plus gap in between films, there’s a clear line that can be drawn between Papa Panda and Totoro as characters. It isn’t just their wide, toothy smiles, but also their fatherly disposition in the absence of an adult figure to guide our young heroine. Amidst high-flying fun and plenty of laughs, it’s made clear at the beginning of Panda! Go Panda! that Mimiko has no parents to watch over her. In Totoro, Mei and Satsuki’s father is often on the sidelines, and they both struggle to connect with their mother while she is in the hospital.

Noting these similarities isn’t to say both films can’t be appreciated on their own merits. They make for delightful children’s entertainment that spark imagination at best and are harmless at worst. But it can be easy to simply shrug off Panda! Go Panda! as a dopamine hit of cuteness and comedy but little else. The two films still play out as very simple, playful scenarios; they are so simple in fact, so comfortable in simply having fun and seeing this newfound family enjoy each other’s company, that some viewers may be turned off by the lack of story progression. While Rainy-Day Circus packs more plot, the original Panda! Go Panda! feels closer to the slice-of-life Miyazaki framework, just with less thematic resonance.

However, once you can internalize the films as Ghibli’s humble beginnings, you can appreciate the intentionality behind so many subtle decisions. On the film’s original laserdisc release, Miyazaki wrote an essay describing the films as “Japan as it might have become.” During production of the films, Japan was experiencing an economic collapse in the wake of their involvement in Vietnam. The movie’s carefree fun may seem vapid in 2022, but back in 1972 it was idealism designed to combat hardship. This is embodied in the character of Mimiko herself, a young girl whose parents are alluded to have passed away. Her grandmother, now widowed, must leave her alone to attend the memorial service. For most children, there is little hope to be found from this. But not only is Mimiko an infectiously positive protagonist, but there’s a new family who can comfort Mimiko and fill her days with joy. They just happen to be Pandas. So what?

Very few filmmakers can embody that kind of hope in a meaningful way, but Miyazaki was one of them, and every detail is richer as a result. Simple village landscapes feel lush and lived in–largely because they were based on Miyazaki’s childhood. The hijinks feel heartfelt, all in service of strengthening a family dynamic. And the animation, as primitive as it may seem, only highlights the storybook-feeling to both of these stories–like you could pick up the Panda! Go Panda! picture book from your local library. It all comes together for a thoroughly enjoyable duo of adventures, lean on story but fat with history.

Funny enough, I decided to watch My Neighbor Totoro right after watching Panda! Go Panda!. Knowing it took the latter to get the former, I couldn’t help but feel thankful for Mimiko and her panda family. But now I can’t get the theme song out of my head…

Panda! Go Panda! is currently playing in select theaters and will be available on Blu-Ray from Shout! Factory and GKIDS on June 21, 2022.

This pair of simple but adorable comedy shorts will charm the pants off of you while giving insight into the makings of one of anime's greatest studios.